The latest economic data from Beijing for first quarter growth confirms the grim but perhaps unsurprising news that China has experienced the worst quarterly year-over-year decline in its GDP in history as a result of the COVID-19 pandemic. The 6.8 percent falloff was widely anticipated by forecasters but not as bad as some had predicted. The median forecast by economists polled by Reuters was -6.5 percent, and the largest forecast decline, by Capital Economics, was 16 percent. Nonetheless, the data show that China faces a greater challenge in recovering its economy than during the global financial crisis of 2008–10.

If there was any consolation for China, it might be the manufacturing sector. Figure 1 shows industrial value added in March was down only 1 percent from a year ago, compared to year-over-year declines of 4 percent and 26 percent, respectively, in January and February. That confirms a recovery in manufacturing (which accounts for almost 90 percent of industrial output), which had been suggested earlier by a pickup in electric power generation since mid-March. Retail sales and fixed asset investment also improved in March compared to the lows of February, but the gains were smaller. 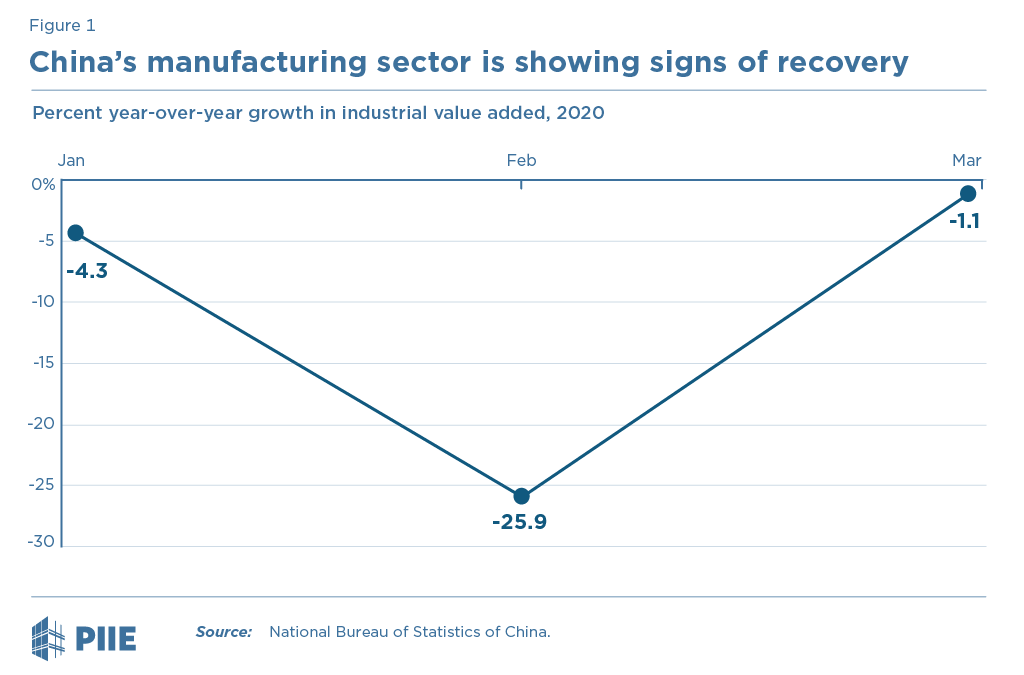 The fact that China faces a historic challenge, worse than the one the world faced in 2008, is also indicated in the newly released data. As shown in figure 2, the year-over-year decline in China's GDP experienced as a result of the pandemic is more than twice as large. And the starting point for recovery now is deep into negative territory, whereas the low point of growth in the global financial crisis in the first quarter of 2009 was a comfortable 6.4 percent.

The global environment will also be less favorable, with the International Monetary Fund forecasting a 3 percent decline in global output this year, whereas during the global financial crisis world output contracted by only 0.7 percent. Finally, China's ability to mobilize policy to respond to the crisis is far more constrained. A repeat now of the massive credit expansion of a dozen years ago would be risky, given the already elevated level of credit to GDP. 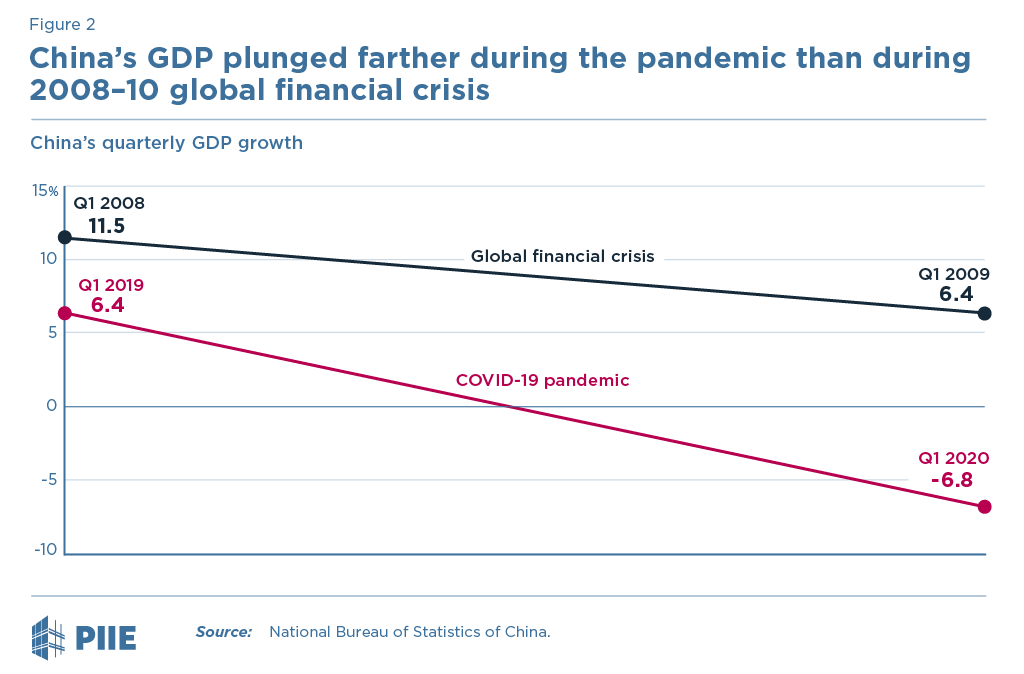 China's leaders no longer explicitly mention the once widely touted goal of doubling GDP between 2010 and 2020, which would require growth of 5.6 percent this year. We are likely to see more of the modest policy adjustments like the ones already taken. These include cuts by the central bank in the required reserve ratio and in benchmark interest rates to encourage some credit growth as well as modest tax cuts. Though the Politburo of the Communist Party on March 27 and April 17 mentioned twice that special treasury bonds to fight the fallout of COVID-19 disease will be issued, it is still not clear at this point how big or effective the stimulus will be.

China's coronavirus health crisis is also a threat to its economy