These releases invariably generate a lot of media attention as analysts fret over whether China has decided to diversify away from U.S. debt.

It’s an important question. If China decided to shift away from U.S. debt it could have an important effect on the U.S. Treasury market.

That said, monthly TIC reports are a poor indicator of changes in the currency composition of China’s official holdings of foreign reserves. The numbers produced by this report are rough estimates and have been off the mark quite frequently.

The U.S. Treasury, in conjunction with the Federal Reserve, produces a five year benchmark survey (most recently in 2009) and one year surveys in the intervening years. Large banks, brokers and dealers are required by law to provide information on their transactions. The Treasury also produces monthly reports by estimating net purchases (gross purchases – gross sales) and adding them on to the annual baseline.

The discrepancies in the monthly reports are the result of the difficulties inherent in tracking transactions. Secondary market transactions, repurchase agreements, and purchases by unidentified investors in global financial hubs (such as London) all serve to obfuscate actual ownership.

The U.S. Treasury itself makes clear that the monthly reports are meant to show cross-border transactions, while the annual surveys show actual holdings.

The graph below shows the difference between the June monthly estimate and the more accurate numbers produced the annual survey. Over the past nine years the difference between the two has been an average of 17%. The small monthly changes in China’s holdings of U.S. Treasuries commented upon by the media are mostly smaller this average difference, meaning that any observed change could be completely overwhelmed by this measurement error. 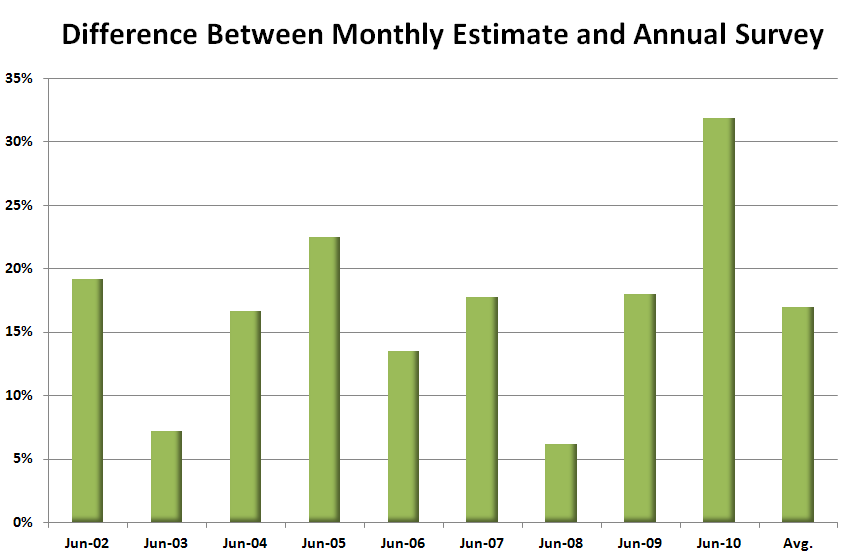 If we ignore the monthly “noise” and instead focus on the annual numbers the trend is clear. 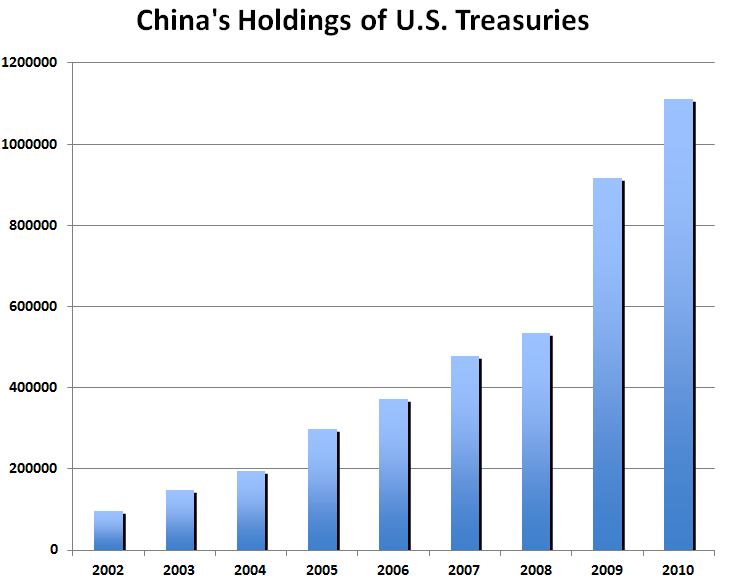 China’s holdings of U.S. debt have increased steadily over time as a result of its currency policy. The PBoC buys massive amounts of foreign exchange to keep the RMB/USD exchange rate within its desired bounds. The PBoC then takes this foreign exchange and invests them in interest-bearing assets, with U.S. Treasuries attracting the bulk due to their ability to absorb large inflows, liquidity and perceived safety.

Chinese holdings of U.S. debt are likely to continue accumulating as long as the renminbi remains undervalued. Monthly fluctuations, especially when they are based off estimates, should be overlooked. A real leading indicator that Chinese purchases of U.S. Treasuries were set to drop would be a slowdown in China’s accumulation of foreign reserves, something which has not yet occurred.