China has one of the highest rates in the world of women participating in the labor force, but they are competing with men on an unequal footing in the workplace. Chinese women face various forms of workplace discrimination across the board, as is clearly visible in China's state-owned enterprises (SOEs), where women rarely rise to leadership positions.1 As previously discussed, the gradual loosening of state control over the marketplace since China's economic liberalization has given firms more latitude, not less, to discriminate against women. At the same time, reduced state support for childcare facilities has imposed an extra burden on women seeking employment and career growth opportunities.

China has stated that it seeks to deepen SOE reforms, because many SOEs lose money and are a drag on economic growth. In the post-pandemic recovery, it is time to put gender diversity in SOE leadership on the reform agenda.

SOEs are important to the Chinese economy. Nonfinancial state firms throughout the country held RMB 234 trillion ($35 trillion) in total assets in 2019 , nearly 240 percent of China's GDP. Central state firms under the jurisdiction of the State-owned Assets Supervision and Administration Commission (SASAC) of China's State Council managed RMB 63 trillion ($9.4 trillion)2 of these assets. These central nonfinancial SOEs employ more than 14 million workers, of which 3.3 million or 24 percent are women.

However, women are significantly underrepresented in senior executive positions. Out of more than 800 senior executives of all central nonfinancial SOEs under the jurisdiction of SASAC, only 5 percent are women (see panel a in figure below). In the companies where there are women senior executives, no woman serves as board chair or party secretary.3 Only two companies have women in the second-in-command role of managing director, and more than half of the female executives serve as chief accountants and heads of discipline inspection, which are rarely paths to top leadership positions.

Central state firms and financial institutions outside the jurisdiction of SASAC seem to have only slightly better gender diversity among senior executives, with women representing nearly 7 percent of senior executives (panel b in figure below). Two central state financial institutions are led by chairwomen and women party secretaries. One is Hu Xiaolian (b. 1958) of the Export-Import Bank of China, previously a deputy governor of the People's Bank of China for a decade, and the other is Li Mei (b. 1964) of China Galaxy Financial Holdings. Both women are approaching retirement age and will likely step down in a few years.4 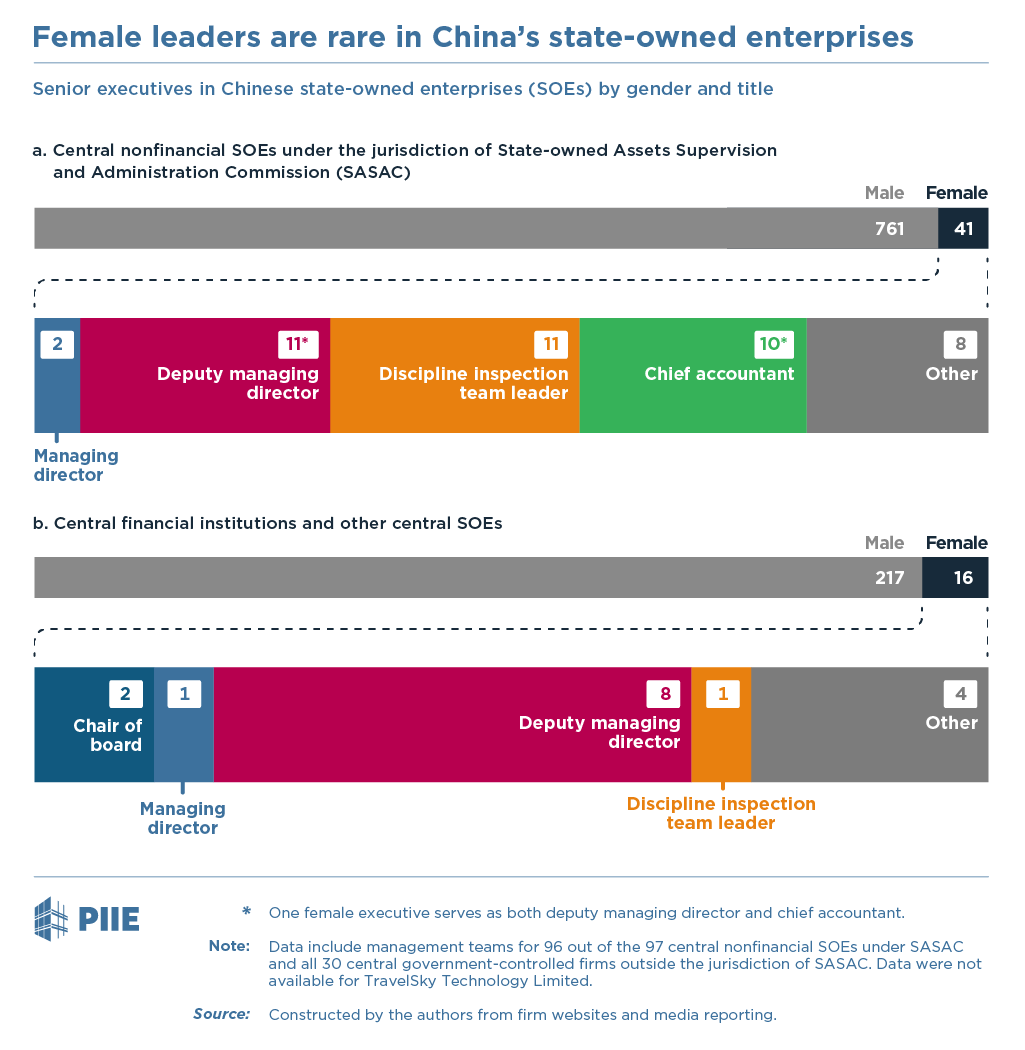 The lack of women corporate leaders in China's SOEs results from many factors. Aside from gender discrimination in promotions, the candidate pool of women executives from which SOE leadership positions are chosen is limited. The SOE restructuring reform that took place since the late 1990s is an important cause for this dearth of women candidates. Women made up a disproportionately large share of the more than 35 million state firm workers laid off in the effort to limit losses at these troubled firms (Dong and Pandey, 2012). Given that most SOE executives start off their careers in a subsidiary of a central SOE and then move to the parent company assuming leadership roles, the pool of female senior SOE executives shrank after the restructuring (Brødsgaard et al., 2017). A giant gender gap in educational attainment at the time also reduced the pool of potential female candidates.

Some research shows a positive correlation between gender diversity in corporate leadership and firm performance. Using cross-sectional data from 2014 spanning 91 countries including China, a 2016 PIIE Policy Brief documents this phenomenon. Similar correlation is found when the sample is expanded to 1997–2017 for publicly-traded firms. In the case of China, Liu, Wei, and Xie (2014) also find a positive and significant relationship between board gender diversity and firm performance in publicly-traded private firms, but not for state-controlled firms. They suggest that the difference may result from directors in private firms being more profit-driven than those in state firms. These suggest that as market-oriented reform deepens within SOEs, gender diversity in SOE leadership will become more important and financially beneficial.

SOE reforms have been taking place for decades, but gender diversity has yet to appear on the agenda. Without a serious reckoning of the significant underrepresentation of women in SOE leadership, any meaningful improvement in gender diversity within China's corporate elites may be less likely. Putting gender diversity on the SOE reform agenda is therefore an important first step, hopefully encouraging more local state firms and private firms to follow suit. The government can consider including gender representation in its regular assessments of SOE corporate governance to encourage a minimum share of top management positions to be held by women. Such an approach would resemble the gender quotas implemented in many countries, both developed and developing, in their SOEs.5

The SOE sector should also build a female talent pipeline that prepares women for the most important positions. Meanwhile, recruitment of women executive candidates must be accelerated. Corporate China has no shortage of highly skilled women with the talent, experience, and ambition to run a successful company. Many of them work in private and foreign invested firms. Given that China is now reemphasizing mixed ownership firms and bringing more private capital into SOEs to revitalize the state sector, employing the right talent is more important than ever.

1. This blog post focuses on China's central state-owned enterprises (SOEs), known as yangqi, including the nonfinancial central SOEs under the jurisdiction of the State-owned Assets Supervision and Administration Commission (SASAC) and the central government-owned financial institutions and other nonfinancial SOEs under the jurisdiction of other ministerial agencies, especially the Ministry of Finance.

2. The exchange rate used to convert renminbi to US dollars in this post is as of November 2, 2020.

3. The Chinese state requires that the party secretary and chairman of the board of a state firm should be the same person. See Article 14 of the Regulation on the Work at Primary-Level Party Organizations of State-Owned Enterprises promulgated by the Communist Party of China Central Committee.

4. Senior SOE executives in China are usually required to retire by age 60, which can occasionally be extended to age 63.

5. Based on information gathered by Noland et al. (2016), quotas for SOEs have been in force in Denmark since 2000, in Norway since 2004, and in Finland since 2005. And it's not just the developed countries that have introduced such a quota system. India introduced a quota in 2013, and Brazil proposed one for its SOEs to enter into force in 2022.