Different Prices for the Same Renminbi

The incremental approach Chinese policymakers have used for renminbi internationalization occasionally leads to strange outcomes, such as a markedly different price for offshore and onshore renminbi.

Restrictions on the use of renminbi within Hong Kong have largely been eliminated. Corporations and individuals are allowed to freely open renminbi-denominated bank accounts and use renminbi to settle all transactions.

If permitted, much of the offshore renminbi in Hong Kong would flow back to China in pursuit of higher rates of return. The PBoC has created a few highly-controlled channels for renminbi to return to the mainland, including trade settlement, central bank swaps, purchases by individuals, approved foreign direct investment and bond issuance. These channels, however, are subject to a quota which ensures that flows of offshore renminbi back to the mainland will not get out of control.

The law of one price tells us that in an efficient market all identical goods must have the same price. It follows that onshore renminbi (CNY) and offshore renminbi (CNH) should therefore trade at more or less the same exchange rate versus the dollar.

The problem is that the offshore renminbi market cannot yet be considered efficient.  While the mainland CNY market is quite large and liquid, the offshore CNH market is still relatively small and illiquid. Price arbitrage, which would normally erase these difference, is difficult because the channels between offshore and onshore currency markets are heavily restricted. Some large Chinese companies have engaged in arbitrage under the guise of trade settlement, but this activity is coming under increased scrutiny from regulators.

The restricted flow of offshore renminbi between the mainland and Hong Kong means that the CNH market periodically runs into supply problems which lead to large price distortions. The graph below shows a marked divergence between the onshore and offshore rates during the last two months. 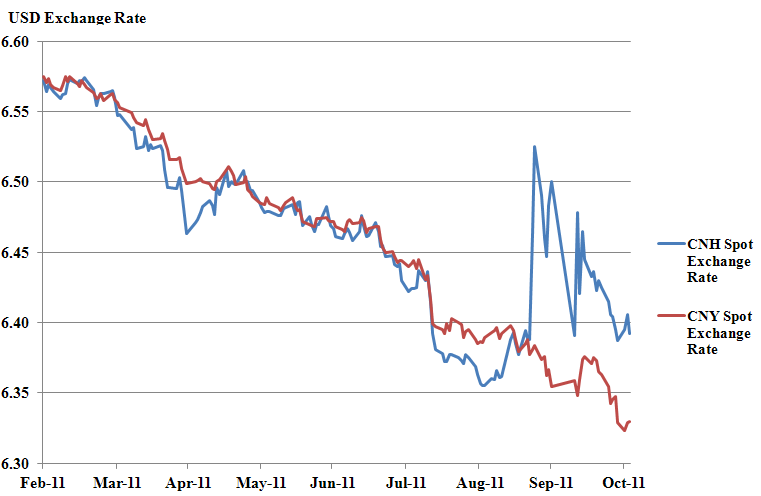 The divergence originated when numerous investment funds began to liquidate their CNH long positions (bets that the RMB would appreciate) as a result of tumultuous events in the global economy.  However, the relatively illiquid nature of the market combined with the sheer number of people trying to sell their positions exhausted the quota and depressed the price of CNH relative to CNY. The CNH market is still small enough (0.8% of mainland deposits) that shifts in global financial flows can significantly affect its value.

The CNH market is growing quite rapidly and is likely to be less prone to these types of swings in the future. The graph below shows that renminbi deposits are beginning to become an important component of total deposits in Hong Kong. 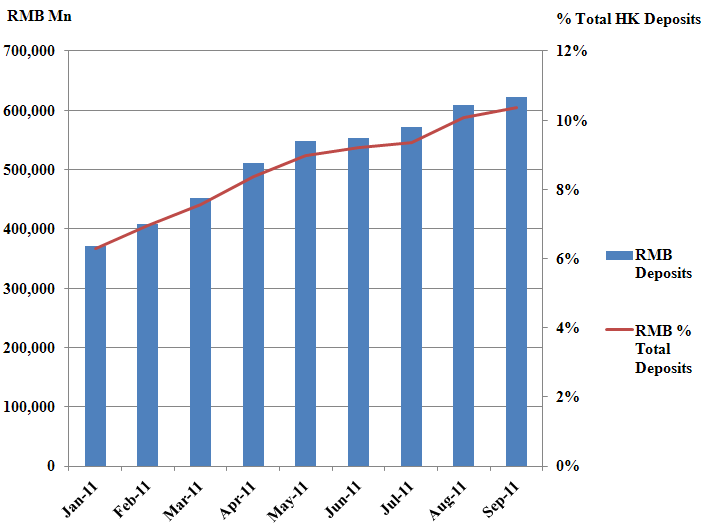 In summary, one of the side effects of China’s incremental internationalization process is that you can have two different prices for the same renminbi.