Over the past several years, few topics in international finance have captured the imagination of academics, pundits, and policymakers as has the prospect of a global renminbi (RMB) that could challenge the role of the dollar or the euro. Chinese policymakers for their part, have embraced the more limited goal of increasing international usage of the RMB, while not publicly advocating full reserve currency status and the free convertibility such status would require. Yet the international use of the RMB has been an important element of China's reform agenda, as most recently stipulated in the statements in and following the 3rd Plenum last year. To this end, China has announced the promotion of offshore RMB centers in Hong Kong, Singapore, Taipei, Singapore, London, Frankfurt, Paris, and Luxembourg, to the delight of offshore investors eager to invest in the RMB, which has not depreciated significantly against the dollar since 1994 and is widely (though not universally) viewed as having further room for appreciation given China's strong economic fundamentals.

In our recent Policy Brief, we find that the most important mechanism behind the increase in offshore RMB assets has been the ability of exporters and importers to settle their foreign transactions in RMB. As we explain, the free convertibility of offshore RMB (or CNH) into foreign currencies has caused the CNH exchange rate in terms of foreign currencies to deviate from the onshore rate (CNY). When foreigners are bullish about the future value of the RMB, they push up CNH so that it trades at a premium to CNY. This gives Chinese importers an incentive to pay for their imports offshore, because they can convert CNY to CNH at par, yet CNH buys more foreign exchange. Chinese exporters have an incentive to accept payment offshore when CNH trades at a discount to CNY, but that occurs more rarely. Our key finding is that excess trade settlement by Chinese importers relative to exporters, in response to the typically observed CNH premium, is the main driver of growth in the supply of offshore RMB. This increase in supply helps to satisfy foreign demand and hold down the CNH premium.

Some speculated that the unexpected (even if policy-driven) downdraft in the CNY in February and March 2014 would cause an exodus out of CNH, possibly causing strains in the Hong Kong banking system given its growing CNH activities and its rising claims on the mainland. As shown in exhibit 1, although at the start of the CNY weakness in mid-February the CNH briefly traded at a discount to the CNY, investors quickly recovered their sanguine view of the CNH and the premium for the month of March averaged 0.16%, above the historical average of 0.10%. In our Policy Brief, we estimate that a full percentage point premium leads to approximately CNH80 billion increase in deposits each month. For March, with an average premium of 0.16%, our findings would predict an increase of CNH24.7 billion in CNH deposits (exhibit 2). The recently released data frotem the HKMA shows that deposits indeed rose by CNH25.2 billion.

In April, sentiment shifted more decidedly against the RMB as investors attempted to parse the signals coming from the macroeconomic data as well as from policymakers in Beijing with respect to their currency policy. As such, for the month of April, the CNH traded at a tiny discount of -0.002%. Our findings predict a slowdown in deposit growth to approximately CNH19 billion for April, and a further deceleration to CNH16 billion in May should the current discount of -0.004% persist for the whole month. 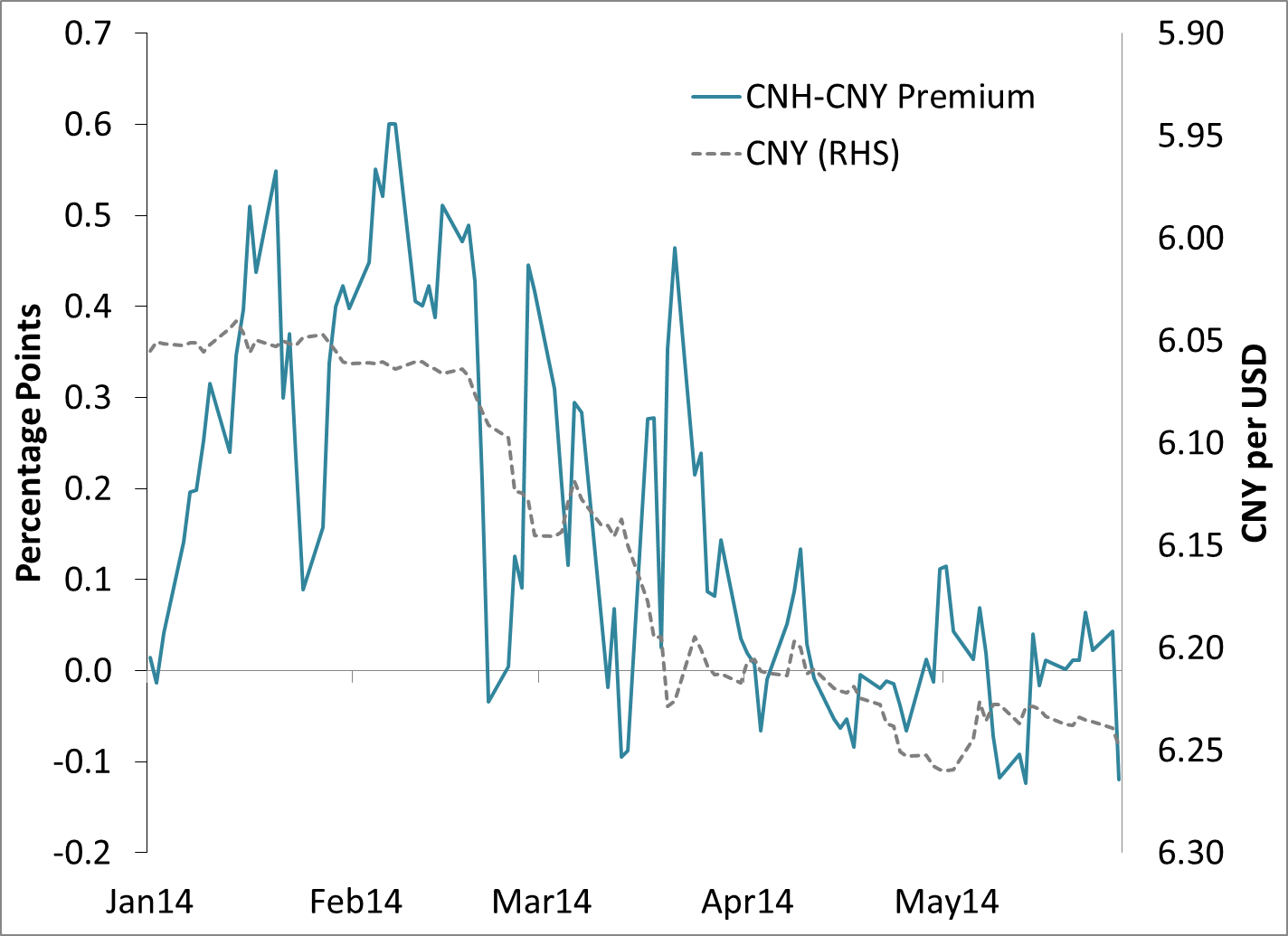 Exhibit 2: Change in CNH deposits, actual vs. predicted (as of March 2014) 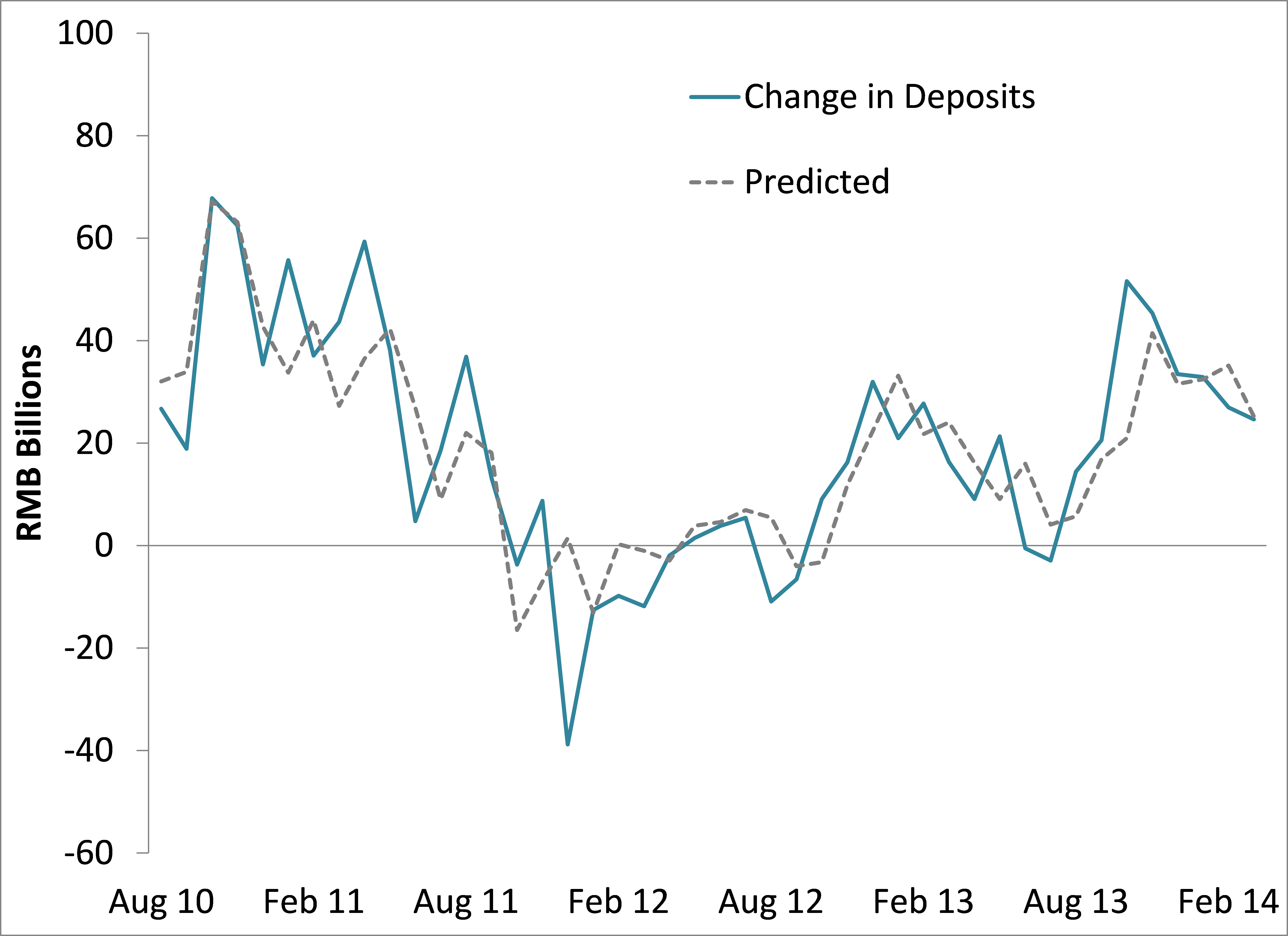 The development of offshore RMB centers should make it easier for foreigners to use RMB in trade and investment. The trade settlement channel we have explored here is likely to continue to supply offshore RMB in a flexible manner in response to net demand by foreigners. However, the RMB cannot become a true international currency until China relaxes its strict controls on capital transactions.

The new SDR allocation will benefit all countries