This is the third in a series on China’s currency, the renminbi.

China is continuing to take steps to integrate its financial markets with those in the rest of the world. Already the data suggest changes in the behavior of the offshore renminbi market. It is too soon to know how deep and lasting the changes will be.

Two years ago, Kent Troutman and I wrote a paper showing that the growth of offshore renminbi deposits responded strongly to differences in the foreign exchange value of onshore and offshore renminbi, also known as CNY and CNH, respectively. We believe this response arises from the behavior of Chinese importers and exporters. When CNH is more valuable than CNY, Chinese importers send money to pay for imports in Hong Kong, growing the stock of CNH deposits. When CNY is more valuable than CNH, Chinese exporters take payment in Hong Kong and then repatriate their earnings to the mainland, shrinking the stock of CNH deposits.

We observed this relationship over the period from mid-2010 through early 2014 and it held up well for a year and a half after we published our results in May 2014. Since November 2015, however, it seems to have broken down. A possible explanation for this breakdown is intervention by the People’s Bank of China (PBoC) aimed at narrowing the CNH-CNY spread. In February 2016, the PBoC removed all limits on foreign institutional purchases of CNY bonds, which may go a long way toward unifying the onshore and offshore markets.[1] Only time will tell.

The Old Model: A Recap

Capital controls between mainland China and the rest of the world prevent arbitrage that would equalize the CNH and CNY exchange rates.[2] Foreign residents are free to buy CNH but face restrictions in buying CNY. When foreigners are bullish on the future value of CNY, they buy CNH and drive its value to a premium over CNY. Conversely, when foreigners are bearish about CNY, they sell CNH and drive it to a discount below CNY. On average from mid-2010 through early 2014, CNH traded at a small premium of 0.1 percent over CNY (figure 1). 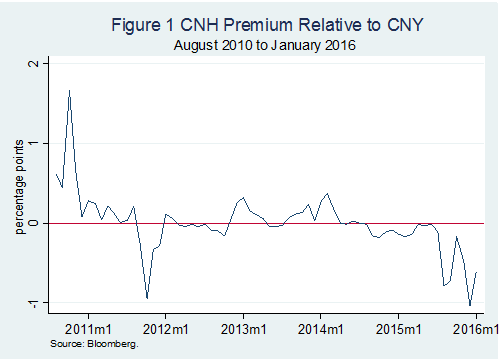 Until recently, we believe the main arbitrage channel for preventing large and sustained CNH premiums or discounts to CNY was exporter and importer settlement in Hong Kong. When CNH trades at a premium to CNY, a Chinese importer is able to obtain more foreign currency by paying in CNH. The importer transfers a claim on a mainland bank to a Hong Kong bank, which can use it to back a CNH deposit, thereby growing the CNH deposit market. Conversely, when CNH trades at a discount to CNY, a Chinese exporter will be able to get more CNH for a given amount of foreign currency, and thus he will prefer to be paid in Hong Kong. When the exporter repatriates the proceeds to the mainland (which he is entitled to do at par), the Hong Kong bank transfers the funds to a mainland bank and the CNH market shrinks.

The first column in table 1 shows the estimated statistical relationship between the CNH premium and the change in CNH deposits as of two years ago. The constant term and the lag coefficient imply that CNH deposits grow around 2 percent per month even when the CNH premium is zero. A CNH premium of 1 percent further increases the CNH deposit growth rate by more than 13 percentage points, with additional lagged effects in subsequent months. The R2 term shows that the model fits quite well. Figure 2 displays the growth rate of CNH deposits and the fitted values from the model in column 1. 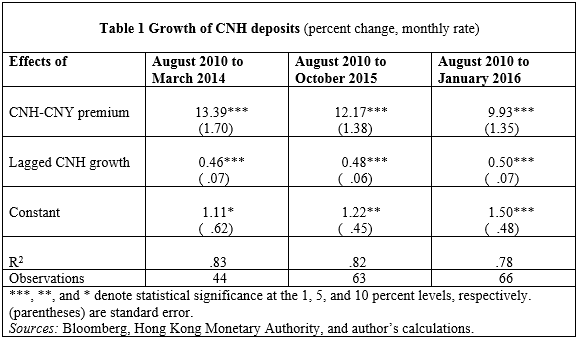 The second column shows that the model did not change much over the next year and a half. Figure 2 confirms that the model fit well for many months beyond the sample in which it was estimated. The vertical line denotes the end of the original sample period.

However, figure 2 shows that a pronounced gap opened up between the data and the model starting in November 2015. The third column of table 1 confirms that the model coefficients change noticeably when the latest available months (November 2015 through January 2016) are added to the sample period.[3] The coefficient on the CNH-CNY premium drops and the constant rises. 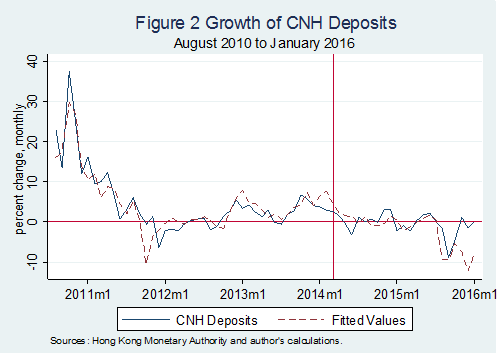 In 2015, the PBoC made a highly publicized push to have the renminbi included in the International Monetary Fund’s (IMF) special drawing rights (SDR) basket. The SDR is the unit of account for IMF transactions. Traditionally it is based on the world’s most important and widely traded currencies. Many people in China view inclusion of the renminbi in the SDR as a mark of China’s importance in global trade and finance. The IMF announced in late November 2015 that the renminbi would be included in the SDR basket effective in late 2016.

A key concern expressed by IMF staff in their report on the SDR basket was the CNH-CNY spread. Other currencies in the SDR basket do not have any appreciable spread in offshore versus onshore trading. The IMF report noted that concerns about this spread had been mitigated by the opening of the CNY market to official institutions and foreign exchange reserve managers as of July 2015. In addition, the IMF report noted that “ongoing reforms that promote greater integration between the onshore and offshore markets should reduce the risk of spikes in the spread over time.”

A possible explanation for the breakdown in our model around and after the SDR decision is that the PBoC appears to have intervened in the CNH market to reduce the CNH discount that opened up late last year (figure 1).[4] If the PBoC bought CNH and held on to CNH deposits in Hong Kong banks, this could explain why CNH deposits did not shrink as our model predicted.

[1] Some observers claim that foreign investors have not been given assurances of complete freedom to exit the market in the future. Such uncertainty would hinder market integration.

[2] As discussed below, this story may be changing, but it correctly describes the situation as of a few months ago.

[3] An F-test rejects model stability after October 2015 at the 1 percent level.

[4] Another motivation for PBoC intervention besides the SDR-related concern may be that a discount on the currency outside China could be viewed as a sign of an overvalued currency, which could encourage capital outflows.