Yesterday I participated in a conference held in Seoul, “Costs-Benefits of the Unification of the Korean Peninsula to Neighboring Countries,” sponsored by the Korea Institute for International Economic Policy. KIEP commissioned papers from American, Japanese, Chinese, and Russian authors to examine the economic impact of Korean unification on their respective economies. I contributed the paper on US interests.

In the paper I take three alternative approaches. One is to estimate a conventional gravity model of trade flows and then use the estimated parameters to generate a counterfactual estimate of trade flows if North Korea traded like a “normal” country. (Note this does not mean North Korea adopts free trade, simply that it exhibits the same trade propensities of a 100 other countries around the world.)

However, computable general equilibrium modeling work that Sherman Robinson and I did years ago, indicates that with fundamental reform both North Korean national income and its trade propensities would increase substantially, ultimately leading to a more than 20-fold increase in trade (albeit from a more autarkic base than is observed today).

These calculations are summarized in the table below. If North Korea exhibited “normal” trading patterns, its economic integration with the South would increase dramatically, accounting for the bulk of North Korea’s trade. North Korea would naturally be sending close to three-quarters of its exports to South Korea, and about 20 percent to China, followed by Japan, the US, and Russia, assuming that the existing pattern of trade (which is highly oriented toward China) does not generate some kind of hysteretic or persistent effects. If history mattered so to speak, China would maintain a higher profile in North Korea’s trade relations and the shift toward South Korea would be attenuated, and the shares for the US and other countries might be lower as well. And if North Korea were to enter into preferential relations with countries such as China or Russia, or if in a collapse and absorption scenario it effectively became part of KORUS or TPP, then the results would diverge from those reported here. 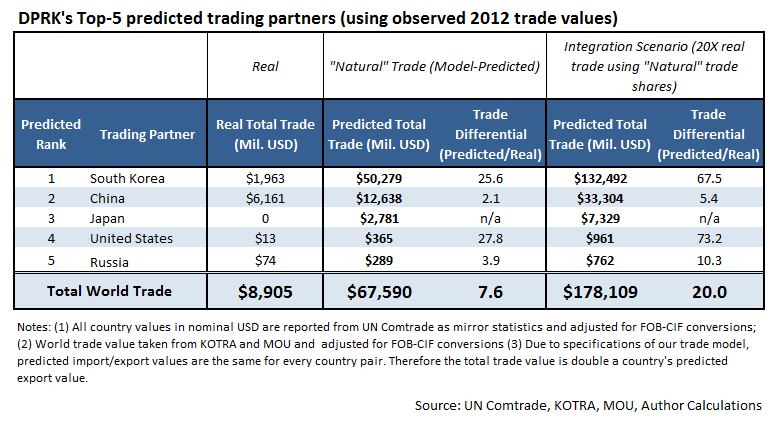 In absolute terms trade between the US and North Korea would rise from its derisory level today to something like $365 million. However, if one takes into account the rise in North Korean income associated with reform, potential merchandise trade with the US rises to nearly $1 billion.

Yet even this adjustment might understate the case. In a collapse and absorption scenario, the North Korean economy would effectively be taken over by South Korean firms. And they exhibit a much, much greater propensity to trade with the US than is predicted by the gravity model. It would not be implausible to expect their North Korean operations to exhibit similar propensities to trade as their South Korean facilities currently do, and as a consequence, actual trade-at least in the manufacturing sector, mining is a different matter—might exceed any of the model-derived results. If one applies those propensities to the North Korean post-reform case, potential bilateral trade rises to $20 billion.

However, unlike South Korea, mining would be an important component of North Korean exports, and it is unlikely that mining products would be exported to the US with the same propensity as manufactures. So the $20 billion figure is probably an overestimate of bilateral trade a decade after unification.

That leaves an enormous range of estimates: $365 million is probably too low and $20 billion too high. But what the analysis does underscore is that it is not adequate to simply talk about “unification”: the specific scenarios matter as demonstrated by these calculations.

These estimates pertain to merchandise trade; in a subsequent post I will address the issue of potential trade in services between the US and North Korea.

Dear Marcus,
I am assuming you will address the issue of tourism to the then former DPRK in your subsequent post. May I suggest that in my "professional" opinion the northern part of Korea is lacking the tourism attractions and infrastructure of the southern part, other than some scenic spots which would be of most interest to other Koreans and some Korea-Chinese and Chinese. Part of this is due to the much greater age of historic sites in the north, their poor state of preservation and/or lack of credibility (think of the Tangun (Dangun) Tomb near Pyongyang), and the fact that we bombed a lot of "buildings" during the Korean War. It would be interesting to see how tourism to East Germany changed after reunification. Did it increase or decrease, and why? There probably would be some specialized interest in remnants of the old regime, e.g. the statues, and other monuments (if they are not destroyed by a newly informed and enraged populace), but I don't think that would be too big a draw. It would certainly be possible that tourists to Korea, i.e., Seoul and the south, would then be able to visit places like Kaesong (Gaeseong) and possibly even Pyongyang on day trips from Seoul (after the highway is improved and the rail line reconnected). There would certainly be some interest in rail travel from Seoul through the north to China and on to Russia and points west. One of the points that has not been mentioned in previous discussions about tourism to the north is that it is a "gateway" economic activity, in my opinion. It is legal, earns foreign exchange for the host country, provides jobs and exposure to international visitors, and usually involves significant infrastructure development that benefits the economy at large as well. Think of new airports, improved rail service, improved accommodations (all of which local business people can also use), a diversified dining experience (usually involving better, safer, cleaner agricultural methods, transportation and storage; think fresh hot house vegetables in China when more foreigners began arriving. All in all I doubt if tourism would be a huge money maker, but certainly the ancillary benefits would be a valuable addition to the redevelopment of the north.

Slave to the Blog: China-ROK, Russia-DPRK, Japan-DPRK, Swiss secrecy, captives and a correction

How South Koreans See the World and Their Place in It