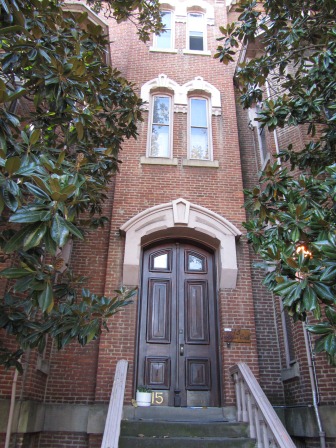 When I first moved to Washington in the mid-1980s, Logan Circle was a scruffy neighborhood of street prostitution and drug dealing. Residents used to complain about waking up in the morning and finding on their lawns used hypodermic needles and the detritus of the sex trade. A decade of gentrification has changed that picture however, and now the neighborhood might be described as mildly bohemian bourgeois, if that is not an oxymoron.

Some in Korea believe that the building should be turned into a museum of Korean independence. I have a different proposal. Instead of looking backward, let’s look forward. At some point, the US and North Korea will begin a process of normalizing diplomatic relations. The North Koreans will need office space in Washington.  They are always complaining about being short on funds. Why not let them use the Logan Circle space? After all, it was previously used as a diplomatic facility for all of Korea, including what is now North Korea.

Of course, I do not know how the property is currently zoned (and neither do those proposing to use the site as a museum as far as I can tell), and the local neighborhood advisory council is likely to oppose its use for diplomatic purposes (embassies have a reputation for being bad neighbors).  But this would be a symbolic yet concrete way that the government of South Korea could contribute to an improvement of relations between the US and North Korea.

One of those ideas that makes logical sense but is politically toxic. "Let's roll out the red carpet for North Korea!"

Sources of Growth in Northeast Asia

STTB: I Need Another Line of Work Edition