In the normally polarized world of South Korean politics, nothing garners bipartisan support.  But the interests of the governing Saenuri party--in search of a softer, post-LMB Nordpolitik--and the traditionally pro-engagement opposition appear to be converging at the Kaesong Industrial Complex (KIC).  The project is even being touted (admittedly by a Hyundai employee) as a channel of macroeconomic stimulus for the slowing South Korean economy!

Last September Mr. Hong Jun-pyo, then GNP chair and now a lawmaker from the Saenuri party, paid a visit to the KIC.  We noticed that in the aftermath of that visit, the MOU relaxed—although it did not altogether reverse—some of the so-called “May 24 (2010)” measures put in place in the wake of the Cheonan incident.

Recently, another visit has been made by eight South Korean lawmakers, this time from both the ruling Saenuri party and the opposition Democratic United party (DUP), with South Korean business representatives in tow. North Korea approved the visit, but there was apparently no contact with North Korean representatives. Returning from the trip, Mr. Park Joo-sun (DUP) conveyed a number of requests by company owners that included:

In other words, business is soaring and we want more labor, more market access, and more financial support.

According to MOU, the KIC has quietly been humming along despite the political standstill between the two Koreas since the Cheonan and Yeonpyong incidents. Even the death of Kim Jong Il only briefly stalled production for two days during the funeral; so much for 100 day mourning periods when remittances are at stake. As seen in the figure below, annual output in the KIC grew from about $70 million in 2006 to $418 million last year, while the labor force more than quadrupled from about 11,000 to just under 50,000 workers over the same period (Dong-a Ilbo). 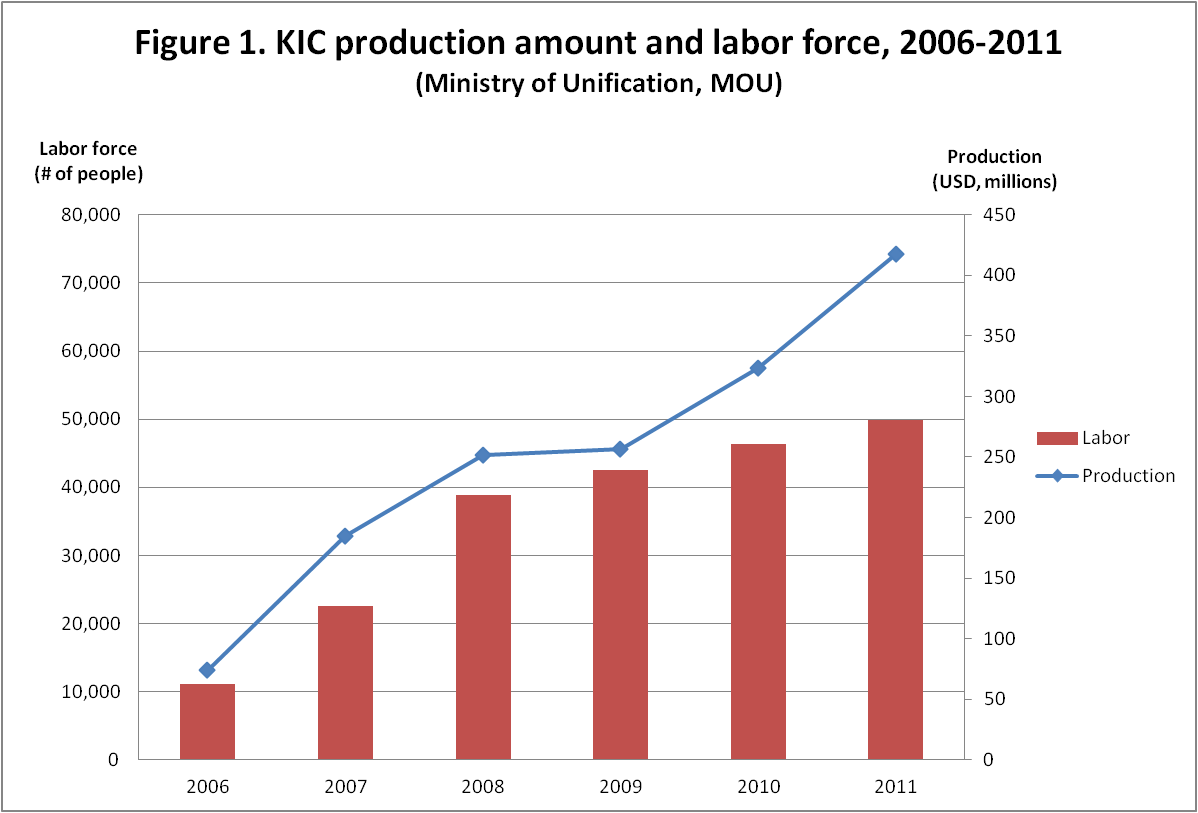 The MOU is considering a further relaxation of the May 24 measures. These include allowing companies to invest in new capacity (entry by new company is still banned), looking into working-level talks with Pyongyang to resolve the labor shortage, and even putting artificial grass on a soccer field to improve living conditions.

One concern has to do with the special economic zones at Rajin-Sonbong and Hwanggumpyong. The South Korean media speculates that the government’s FTA negotiations with China will likely aim to include these two areas as external manufacturing regions and give the same tariff benefits to their products that were given to KIC goods in the South Korea-ASEAN FTA. Dong-a also reports that large conglomerates such as POSCO, SK and Daewoo Shipbuilding & Marine Engineering are finally testing the waters in these new zones; the KIC is run by Hyundai Asan, introducing long-standing chaebol rivalries into the picture. North Korea has allegedly agreed with China to allow joint ventures involving South Korean companies into these new zones. While we remain skeptical about their prospects. But we can never rule out the possibility that the demand for foreign exchange will drive the new leadership in Pyongyang to make the necessary compromises to get them up and running.

From hermit kingdom to miracle on the Han

RCEP is not enough: South Korea also needs to join the CPTPP