As Steph noted, the basic issue is that China has stopped reporting oil exports to North Korea, but a variety of anecdotal evidence points away from the notion that China has actually ceased exporting oil to the DPRK. KOTRA has guesstimated that in 2014 China supplied North Korea with 500,000 tons. The graph below illustrates the China-North Korea trade balance under three scenarios: no oil exports (i.e. the published data from the Chinese customs authority); the KOTRA estimate of 500,000 tons held constant but the value of oil exports reflecting the drop in global oil prices in 2015; and the KOTRA 2014 estimate in value terms held constant (which would imply an increase in the volume Chinese oil exports to North Korea). 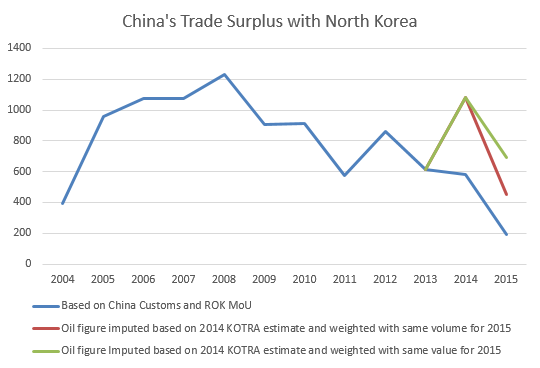 In the first scenario, North Korea’s trade deficit with China fell to $190 million in 2015.  If we assume that China has continued to ship the same volume of oil and its transaction price reflects the movement in the world prices, North Korea’s trade deficit with China is $455 million in 2015. If we assume that China kept the value of exports constant, then there is lots of oil in North Korea, which might be good for domestic inflation and might be appreciated by donju automobile owners, but the imported oil would generate a $690 million deficit. In short, how much oil is being shipped to North Korea and on what terms is a non-trivial issue for the North Korean balance of payments. In the unlikely scenario that China really wasn’t exporting oil to North Korea, the money that North Korea was earning at KIC (about $130 million) would finance most of its $190 bilateral deficit with China, and the closure of KIC would be a major blow. In the other scenarios, its closure just makes a bad situation worse.

But oil is not the only commodity whose price is falling. Coal accounts for more than 40 percent of North Korea’s exports to China. And as I discussed in a previous post, increasing volumes, made possible by Vietnam exiting the market, have partly offset the impact of falling prices. We can’t really construct a true index of the terms of trade, since we don’t know the true volume or price of Chinese oil exports to North Korea. But we can compare movements in the price of North Korean coal sold to China to movements in the world price of oil. 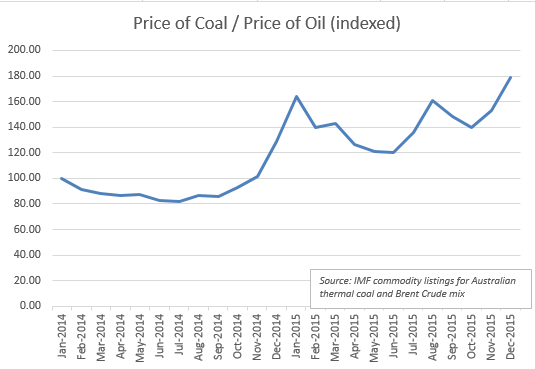 If anything, this simple terms of trade indicator suggests that North Korea’s terms of trade with China has actually been improving—the price of its major export (coal) has been falling more slowly than what is widely believed to be its major import (oil). As a consequence, if China is, as the anecdotal evidence suggests, continuing to ship oil to North Korea, paying for it has actually been getting easier, especially in the last few months. Perhaps that helps to explain Kim Jong-un’s friskiness. That is until Park Geun-hye knocked a $130 million hole in his budget.

"Knocking a hole in Kim's budget" causes one to pause for concern over the innocents who will be affected by this reckless decision. North Korea will simply develop more mafia tactics to make up for it, and at the end of the day the outside world looks responsible for suffering of average North Koreans and the Kim regime looks like the only thing maintaining any semblance of survival.

The Scramble for Bauxite: Beware of Chinese Promising Gifts

Slave to the Blog: Money, Guns, Doctors, Jocks, Lawyers, and One Righteous Mongolian

Peak copper and lithium? The siren song of the peak resource arguments