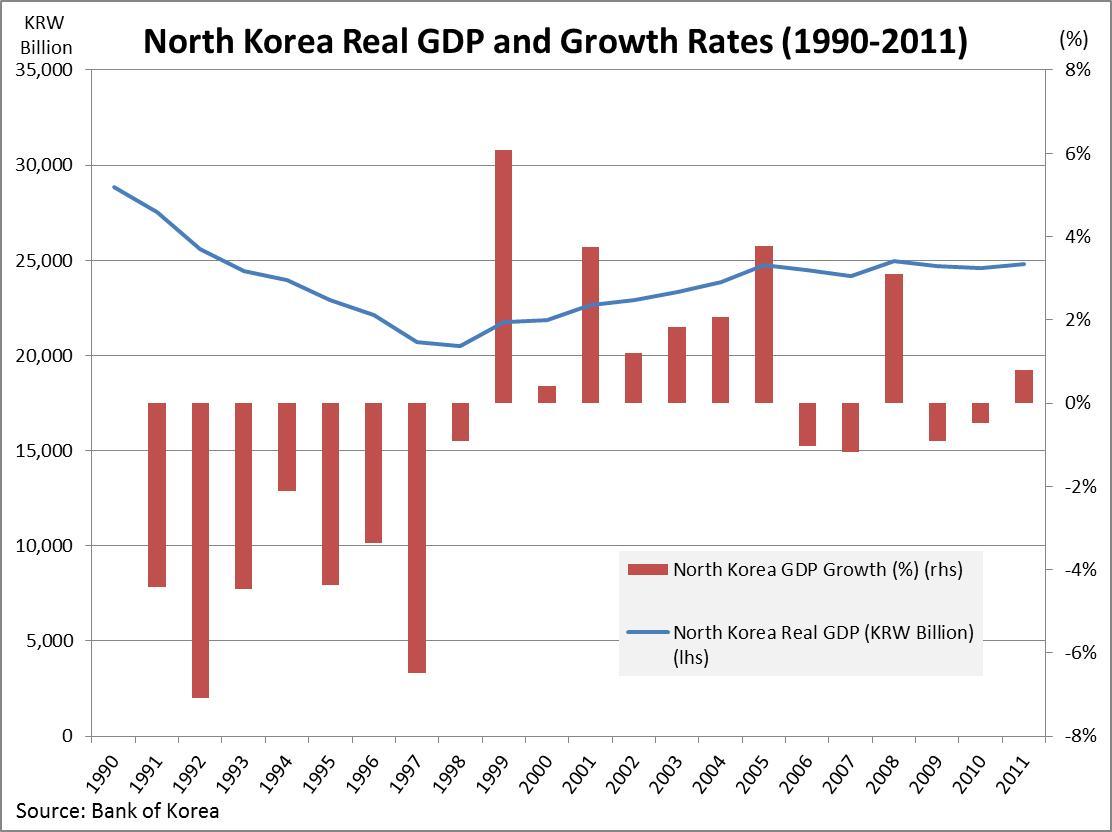 The (South Korean) Bank of Korea released its 2011 economic data for North Korea last month.  Although problematic for all kinds of reasons, these data basically set the terms of public discussion of the North Korean economy.

According to the BOK’s figures, much of the incremental boost to growth last year came from the agricultural sector. Agriculture, which accounts for about one-quarter of the economy, was estimated to have grown more than 5 percent last year.  Mining, which accounts for about 15 percent of the economy, also grew.  But manufacturing was estimated to have contracted by 3 percent, with the heavy industry subsector contracting my more than 4 percent.

Electricity, gas, and water contracted by almost 5 percent.  This would be consistent with stories of power shortages, and a recent South Korean government report that claims that per capita electrical consumption is no higher than in the 1970s.

The BOK estimates that non-government services, including wholesale and retail trade, restaurants and accommodation, transportation, communications, and finance, grew at 0.6 percent last year—slightly less than the overall rate of growth, that is.  This finding is puzzling in light of anecdotal evidence of a burgeoning retail service sector inPyongyang and claims of one million cell phone subscribers. Trade is estimated to be down 0.2 percent, while transportation and communications are up 1.5 percent.

The BOK reports data on nominal GDP and real GDP.  In principle one can derive an estimate of inflation by merely comparing the two.  The results are astonishing.  The BOK data series imply that since 1990, the annual rate of inflation in North Korea has never exceeded 7 percent.  This result is wildly at odds with estimates done by economists within the South Korean government as well as those working in academia. My own estimates which indicate that inflation exceeded 100 percent a year in the aftermath of the 2002 reforms before eventually subsiding and again reached triple digits following the 2009 currency reforms.

These observations raise the fundamental issue of how seriously to take these data.  There is a certain degree of mystery about how the BOK statistics are compiled.  According to the BOK, they derived from quantity data “supplied by relevant institutions” and then aggregated using South Korean prices and value-added weights. It is likely that non-service output is easier to observe using whatever methods the South Korean authorities have at their disposal, so that estimates for agriculture and industry may be based on more solid data than for services. Whether this leads to a downwardly biased estimate of services output (and by extension an underestimate of GDP growth), or just an overly smooth estimate of year to year changes in services output (and again by extension, an overly smooth estimate of overall growth) is unknown.

What is known is that the use of South Korean prices and value-added weights are not appropriate, though given the absence of the relevant North Korean data, it is debatable what approach is preferable.  I believe that the equivalent Chinese figures are be a better match, and in my own work have used the Chinese input-output table as a proxy for North Korean production relations.

And in any event, these economy-wide figures obscure the growing divergence between Pyongyang and the rest of the country.  If the BOK statistics are even remotely accurate, and one takes into account the widening gap between the capital and the hinterland, these data imply that living standards in much of the country are regressing at a rapid rate.

And if this conclusion is correct, then it raises questions about Kim Jong-un’s governance, and the stability of the North Korean system.  One normally sympathetic foreigner, who recently returned from the country, described the regime’s political strategy as “bread and circuses for Pyongyang” and wondered about its economic sustainability. While Kim Jong-un may be a better retail politician than his father (anything must beat being governed by the Man Behind the Green Curtain) if the system goes down, history may record that video of him being strapped into the rollercoaster as the regime’s “Let them eat cake” moment.

The Fed signals that it will taper soon

Another reason to raise the Fed's inflation target: An employment and output boom