The newspaper stories all are based on the latest North Korean crop update from the FAO. The report documents a decline in domestic food production relative to the previous harvest which it attributes mainly to bad weather and lack of availability of water for irrigation. But as the report notes in passing, production had been rising for several years, and indeed the figures for the prior 2014-15 harvest cycle exhibited an unusual jump in rice production. So roughly speaking, yes, production is down—from a peak.

The chart below, which combines data from the new FAO report with last October’s FAO Outlook, appears to document a reversion to the “new normal.” Per capita availability of rice is at roughly the same level it averaged during the period 2011-13, and corn availability is actually up relative to that earlier period.

In addition to bad weather, the FAO cites declining availability of fertilizer as a reason for the decline in production, and according to its figures, fertilizer use is down this year—but again after rising in previous years. 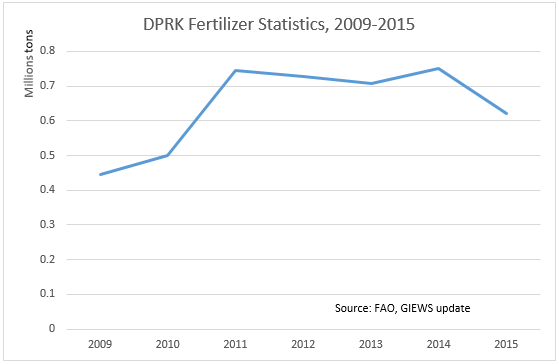 If the headlines were correct, and the availability of food were really declining, one would expect to see this manifested in prices. But neither the rice price data published by the DailyNK (with a noticeable lag) or more recent anecdotal reports indicate spiking grain prices which appear to be remarkably stable.

This is not to say that things are hunky-dory in North Korea. All evidence points to growing inequality, and it is almost surely the case that a significant number of non-elite households are food insecure. The WFP’s aid program is grossly undersubscribed with only a handful of countries contributing as donors have thrown up their hands at North Korean obstinacy in the implementation of the aid program, and its foreign policy provocations. I don’t think any of us would like to perform the Rawlsian experiment of changing places with a randomly selected North Korean. 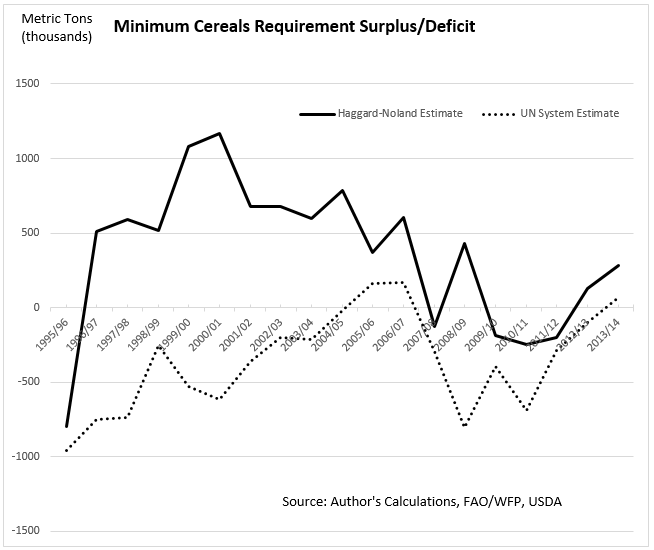 The UN agencies do some excellent work in North Korea under severely challenging circumstances, but the fact of the matter is that if their estimates were taken seriously, North Korea would have experienced a more or less continuous famine for the last 20 years, and there is no evidence of such an outcome. So, yes, things would appear to be worse now than last year, but sadly, this simply represents a reversion to the status quo that has held for most of this decade. Now, if we could only get journalists to think a bit before filing their stories…

Let us pray that some real data comes along as sanctions progress so the world community won't be caught sitting by watching aimlessley whist a holocaust is underway.