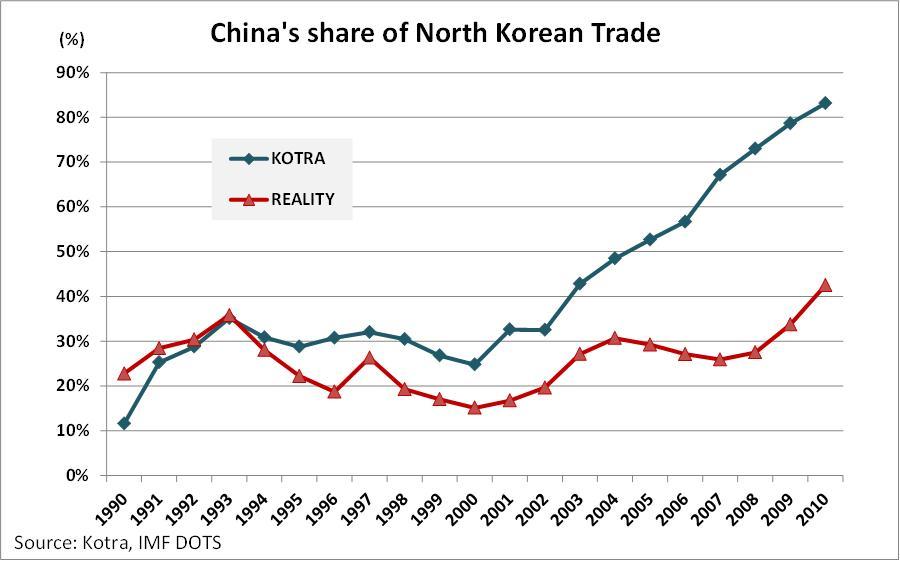 There have been a spate of reports recently on Chinese sanctions busting. In an earlier post, we catalogued concerns about Chinese support for a North Korean missile launcher, and possibly for the failed launch itself.  In August 2011, Changgwang Trading Corporation, a front company for Korea Mining Development Trading Corporation, bought trucks in China that were modified to carry mock-ups of missiles in the military parade celebrating Kim Il-sung’s centenary. We also reported on leaks from the upcoming UN Panel of Experts report that noted the porousness of controls on luxury exports from China.

Now The Telegraph has gotten its hands on “a study compiled by the intelligence agency of a country in the region” that adds a few details; “the region” implies a relatively short list of suspects, and we somehow doubt it is the Russians but who knows?

Dalian is identified as a major transshipment point. The Telegraph claims that “personnel from North Korean banks and trading companies regularly meet at Beijing International Airport to deliver large sums of money earned from weapons deals.” Not surprisingly, bribes are involved, and they are not small: “£40,000 – £60,000 is paid to a [Chinese] customs official to send each 40ft container filled with illegal missile components through Dalian.“

To us, the most interesting detail has to do with the UN enforcement process. According to the story, the North Korea Sanctions Committee—an intergovernmental body--has “frequently asked China for clarification of North Korea's weapons transport through the port of Dalian, but China is said to have been shifting the responsibility to shipping companies of other nations or refusing to answer.” Shipping countries of other nations do not have responsibility for enforcing Chinese export controls; that is the job of the government of the PRC.

The fact that there would be leakage through China is not surprising. The sheer density of cross-border trade provides ample opportunity for evasion.

So how important is China to North Korea? The numbers cited are often wildly exaggerated in the policy debates, largely because of the difficulty of getting accurate information on the DPRK’s overall trade. The government of North Korea regards economic statistics as state secrets; as a result, all trade data has to be reconstructed by examining the “mirror statistics” of the country’s trade partners: by adding up what other countries say that they import from the country.

But even such an apparently simple exercise is fraught.  First, a number of countires—including Iran—also do not provide reliable trade statistics. Second, nearly every year the statistical agency of some country around the world gets North and South Korea confused and reports an amazing spike in trade with North Korea, consisting of imports of North Korean cell phones and automobiles.  Not!

The most widely cited source on North Korean trade is a South Korean public agency, KOTRA, which carefully screens the mirror data for such obvious anomalies. But KOTRA adopts a number of other conventions that distort the overall trade picture.  In calculating North Korean trade it excludes the country’s trade with South Korea (on the constitutional grounds that inter-Korean trade is within the nation) and oddly ignores trade with many Middle Eastern countries that do in fact report trade with North Korea to the UN statistical agencies. We have never figured out why they do this, and it may have reasonable motivations, such as beliefs about the reliability of the data. But simply throwing the data out makes now sense.

The upshot is that the prominence of the trade partners that KOTRA does count is greatly exaggerated.  The New York Times and Washington Post, for example, have both reported that China accounts for 80 percent of North Korea’s trade; even with smuggling that is wildly exaggerated given the ongoing important of Kaesong for North Korea’s balance of payments.

The actual figure, once North-South and other missing entries are accounted for, is roughly half as much by our estimates (see the figure above). But over 40% reliance on China is not trivial. Moreover, the prevalence of private firms in this trade—as we have reported in two recent working papers (here and here)—is high. Moreover, state-owned enterprises are themselves profit-driven. Even if Chinese authorities were aggressive in enforcing sanctions—which they do not appear to be—the opportunities for mischief are high.

Can China blunt the impact of new US economic sanctions?