Bahng Tae-Seop and his colleagues have released another edition of their quarterly survey of expert opinion on Korean peninsula security matters. (It can’t be that expert—I am one of the respondents). The responses to this survey, like similar ones, tend to be myopic, and overweight recent events; this particular edition suffers from the fact that it was done prior to the North Korean missile launch and the South Korean presidential election, both of which should affect security on the peninsula.

So rather than going through the general results (broadly unchanged from previous surveys) I would like to focus on a couple of really striking results.  The first is that while on a 0-100 scale the results tend to cluster in the 40-60 range, there are some outliers. China-Japan relations get a 10 score from the experts, and ROK-Japan relations come in at 19.  I am reminded of the recent graphic from the Council on Foreign Relations that shows the density of territorial disputes in Asia.  Japan is a major participant, but China is at the center of these disputes. I apologize for the low quality of the reproduction below.  The key takeaways are that the number of disputes is rising from 4 in the 1980s to 29 in this decade, and China is in the center.  Oddly, on whatever criteria they use, the NLL doesn't seem to count. 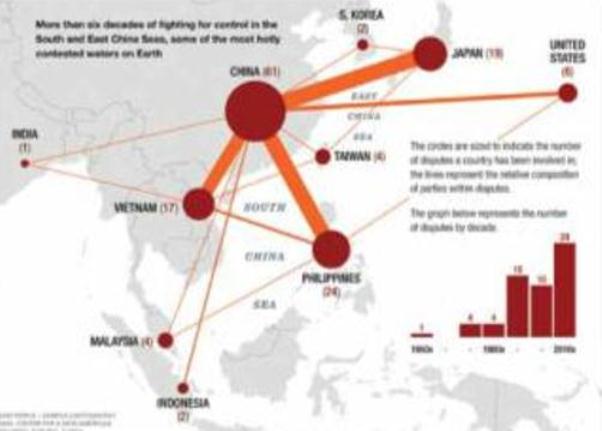 The other interesting result is on North Korean political stability. Current stability rates a 54 and the experts give the outlook for stability over the next quarter a 53.  Presumably the successful missile test will push these numbers even higher.

Asset Markets and Geopolitical Tensions: Is it Really Different this Time?

Sources of Growth in Northeast Asia