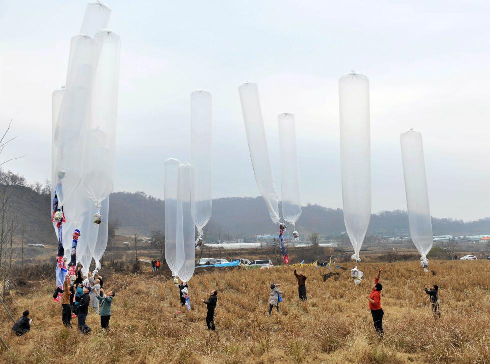 We have been remiss to not devote more posts to the ongoing controversies over the efforts of NGOs, some organized by refugees, to penetrate North Korea with large balloons filled with political leaflets. The groups have tried various stratagems to increase the likelihood of the balloons’ cargo being collected, including packing them with money, and that quasi-money, the Choco Pie.  North Korean GPS jamming, which we have discussed previously, may have been provoked by a Christian group that supposedly began attaching GPS tracking devices to its balloons in order to gather landing data to further refine their launch effectiveness.

One rightwing group recently came upon a novel way of getting their points across—filling the balloons with 5,000 condoms and an unreported number of sanitary pads.   Bong Tae-Hong explained to the French press group AFP that “We’ve heard condoms are particularly difficult to secure in the North,” and that in addition to political leafleting, “North Koreans also need them as contraceptives and for protection against sexually transferred diseases.” Also included were “electric torches, sweets, underwear, socks and toothpaste.” To paraphrase Major T.J. “King” Kong in Dr. Strangelove, “Shoot, a fella could have a pretty good weekend in Kaesong with all that stuff.”