In a post last week, we looked at a new EAI report on South Korean public opinion on unification and the “bonanza” idea more specifically. Conducted in May—before the land mine incident and North-South agreement—the findings reflect caution toward unification and growing skepticism among the younger generation in particular.

What else is driving opinion? The report finds a correlation between Park’s overall approval ratings and approval for the “bonanza” concept. In May, the South Korean public was much more skeptical about the performance of the Park administration on all dimensions than it was last year with her negatives now standing at at 50%.

Those on the right were also more likely to support the “bonanza” and those on the left to be against it. Yet, for all camps—progressive, centrist, and conservative—there was a drop in approval for the “bonanza” idea and this drop was sharpest for those in the center, falling from 55% support to 43% in one year.

Finally, the report notes what we believe is the main constraint on support for unification: the recognition of the enormous economic costs. Whatever long-term benefits might accrue—as Moon Jae-in emphasized on his take as well—the costs in the short-run are clearly high. The share of those believing the economy is doing poorly exactly equals Park’s negatives. Support for the bonanza idea is lowest and has fallen most sharply among those who think the economy has worsened. The report rightly notes two possible reasons for this: the general link between a good economy and favorability toward a president’s policies; and the perception that a better economy will make unification more affordable. Although the report is providing very general correlations in attitudes, the relationships are certainly plausible. 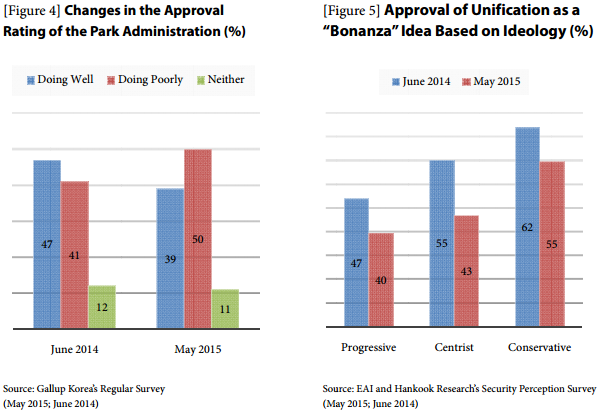 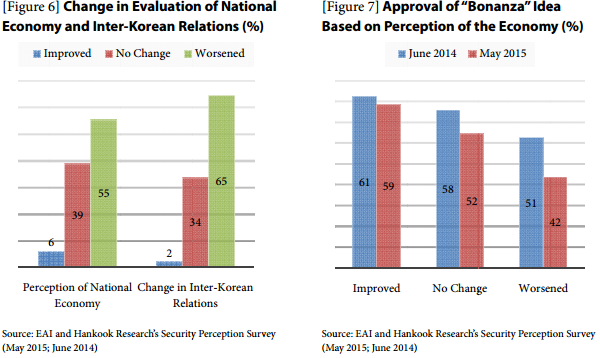 Interestingly, both Park Geun Hye and Moon Jae In are emphasizing the long-term economic windfalls of Korean integration. Yet it remains puzzling to us why both sides of the aisle seem so intent on pushing the unification line at all, unless it is out of a deeper strategy of preparing for the worst. In any case, we read this report as suggesting that they are out of step with (more sensible) public opinion, among which only a small share support for rapid unification. The public seems to believe that talk about unification should be cautious. The next generation sees either no need to rush or no need to think about the issue at all.

South Korean Opinion on Unification I: What Bonanza?