When I looked at my notes for this post, they reminded me of detritus from the drug-addled mind of the late period Hunter S. Thompson. So let’s wheel out the Red Shark and get started before the hallucinations kick in. First stop, China.

It was announced last week that trade between North Korea and China had hit a record $6.45 billion. Trade between the two countries remains concentrated in commodities. North Korea’s leading export items were anthracite coal ($1.37 billion) and iron ore ($294 million) and its biggest import was crude oil ($598 million). Interestingly, cell phone imports from China actually fell by more than 25 percent.

These data underscore how vulnerable North Korea remains to a slowdown in China and/or a weakening of commodities prices. News that manufacturing output in China was slowing contributed to the selloff in world stock markets and there is no particular reason to expect that North Korea will be immune. Prices for 10 out of 14 metals fell in 2013, though North Korean exports are concentrated in low value commodities such as anthracite and iron ore. And as Kevin Stahler has pointed out, there is some evidence that China may exploit North Korea’s relative isolation to obtain those minerals at advantageous prices.

Next stop, Panama, where sugar was the commodity in question in the Chong Chon Gang misadventure. Panamanian judges ordered the release of 32 of the 35 crew members, retaining only the captain and two officers. The Panamanian prosecutor revealed that the captain and officers were carrying instructions on what to do if the illegal shipment of arms were discovered, but that there was no proof that the crew understood the nature of their mission. Conviction on the charges faced by the three officers carries a penalty of up to 15 years in prison. If convicted, I wonder if the Panamanian authorities would allow the three to serve their terms in a North Korean prison as a humanitarian gesture. 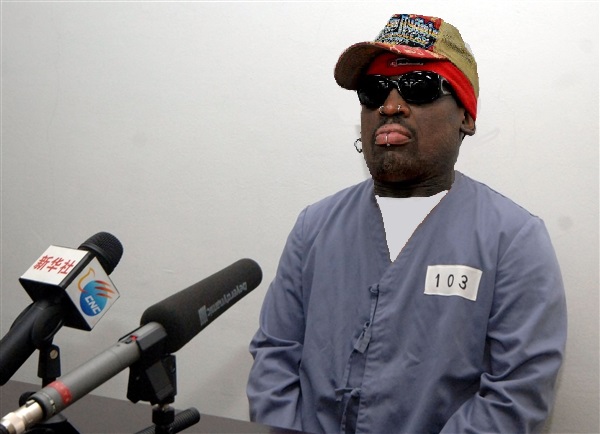 Now, as Hunter S. Thompson once said, “when the going gets weird, the weird turn pro.” In an earlier post I had suggested that we trade Bill Laimbeer for Kenneth Bae. But Ambassador R has done me one better, personally volunteering to exchange places with Kenneth Bae. (When asked to comment on this latest development, the Bae family understandably declined any further entanglement in the Rodman circus.)  It is not clear if the Worm anticipates doing real time a la Bae, or if he expects that as a humanitarian gesture, his friend Kim Jong-un would let him continue the “7-star” lifestyle for the duration of his sentence.

Either way, we should do nothing to discourage this humanitarian gesture.  Indeed, we should encourage it. Let’s start a petition in support! If we get 100,000 signatures the White House will have to respond. It’s not like we’re advocating deporting someone. No, we’d be expressing out support for an extraordinary act of voluntarism! Anyone want to get the ball rolling?

Last stop, Sochi. (Can you imagine what Thompson could have done with this setting?) We’ll conclude with the sort of anti-Thompson, Tom Bodett, and his prediction concerning the Sochi opening ceremonies: “The North Korean team will be lead in the parade by Kim Jung Un's missing Uncle Chang. You think I shot my own uncle, dear leader little Kim will say in a prepared statement. We totally punked you. That was Dennis Rodman's idea. High five, Denny.” Unfortunately, it appears that no North Korean athletes have qualified for Sochi, so Bodett’s vision is unlikely to be fulfilled.

UN Panel of Experts Report on Sanctions, part 3 of 3