From the Twisted Mind of Nicholas Eberstadt

Nick Eberstadt is one of the few people in this business who annoys more people than I do. I thought of Nick when Steph Haggard passed along a UPI piece by Elizabeth Shinn titled “Kim Jong Un's economic plan targets foreign investment.” Coming the same week that the North Koreans abruptly disinvited UN Secretary General Ban Ki-moon from visiting the Kaesong Industrial Complex, North Korea’s showcase attempt to attract foreign investment, this headline struck me as pretty amusing. My response to Haggard: “’Noland’s lifestyle plan targets flat abs.’ Wake me up when it’s over.”

The reason I thought of Nick, who earlier this week played the skunk at the party at a shindig sponsored by the Chosun Ilbo, is that his presentation crystalized something that I have argued time and time again in rhetorically less effective ways: that the government of North Korea has a fundamental credibility problem and until it builds some credibility, it will have a hard time attracting investment, which after all, is an irrevocable bet on the future.

Steph Haggard and I have written a series of survey based papers which documented the challenging North Korean business environment as seen by Chinese and South Korean firms and enterprises. In them we have argued that the weakness of the North Korean business environment limits the volume of cross-border exchange, pushes firms towards trade rather than investment (which is subject to expropriation), limits transactional complexity, and generates a risk premium that punishes North Korean counterparties financially.  I have toyed with doing a counterfactual in which I calculated what the effect would be of giving North Korea the quality of institutions of say, China, much less Denmark.

Well, Nick beat me to the punch. His calculation is a simpler one running off the Heritage Foundation’s Index of Economic Freedom, which scores countries according to rule of law, the fiscal position of the state, regulatory quality, and the ability to engage in trade, investment, and financial exchange. The results are eye opening.

[A correction: I misread the powerpoint.  He actually has the lagged values of several controls in addition to the Heritage Foundation measure on the right hand side of the regression.  So these results reflect more than mere simple correlation.  Which makes the results even more eye-opening. My apologies. 22 May 3:43pm.]

Nick does two counterfactuals: what would North Korea’s income level be and what would its volume of international trade be if it had the institutions of Zimbabwe, China, or South Korea? As the charts below demonstrate, in this calculation, adopting Zimbabwe’s institutions would be associated with a near doubling of income per capita, and a near tripling of international trade: 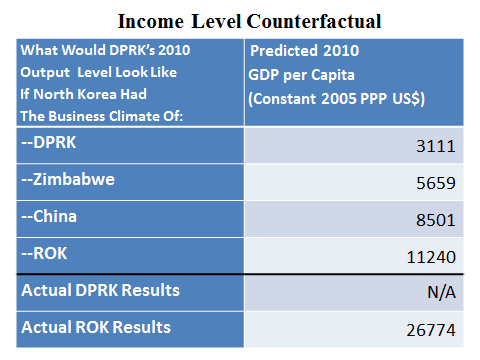 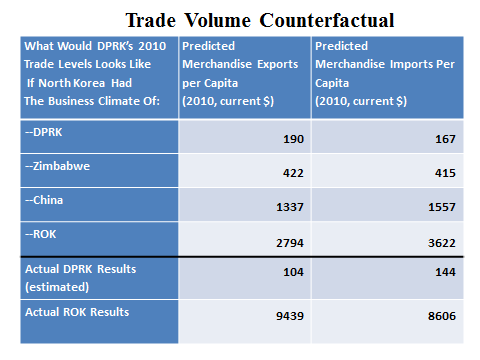 North Korea and Zimbabwe have a long history of cooperation; I wonder if Comrade Bob is available for consulting?

This is not to say that North Korea will find it impossible to attract foreign investment, particularly in the extractive sector where investment is a virtual necessity, albeit a highly risky one due to the hold-up problem. And just this week, South Korea's Federation of Korean Industries announced that it was setting up an office in Pyongyang. The point is simply that the lack of credible protections on property rights and systems to adjudicate commercial disputes is a real drag on North Korea's development, one made worse by the country's saber-rattling.

I know plenty of foreign North Korea investors, but since they wouldn't be happy if I mentioned their names, I'll mention that Jim Rogers recently said he'd "buy North Korea if he could." http://www.forbes.com/sites/gordonchang/2014/03/23/jim-rogers-wants-to-p... North Korea does not have as much a problem attracting foreign investors as they do opening up to those they don't trust. For that reason, they didn't allow Ban Ki-mun to visit. Granted, he's not a foreign investor, but they felt he wanted to use his influence during a Kaesong visit to leverage North Korea to allow South Korean Chaebol's to set up shop in Pyongyang - two requests that were disapproved due to lack of trust, not interest.

Hi ? How are you doing ? you are doing good jobs,ta ke care.

It’s true North Korea’s business environment is not the most inviting one. But multinational corporations consider direct investment as particularly risky for another reason: it’s the potential ‘penalties’ by the U.S. with a market numerous times larger than North Korea’s.
The ABB Group I worked for was one of the first large investors in China when it started opening up, or in Russia when the Soviet Union collapsed. The investment environment there wasn’t much better at the time, but for companies with an early-bird strategy the uphill struggle paid off later thanks to the large market shares they gained. The competing followers often had to pay a much higher market entry price. But unlike in the case of much smaller North Korea, multinationals did not face costly ‘political’ disincentives then which is why even fast movers don’t move at all now.

Slave to the Blog: Money, Guns, Doctors, Jocks, Lawyers, and One Righteous Mongolian

Slave to the Blog: The Worm (Re-)Turns