Are Sound Democratic and Legal Institutions Necessary for Growth?

In the 2000s, the emerging consensus among economists was that if countries had the right economic and legal institutions that govern exchange, property rights, dispute resolution, and corruption, good policies and economic growth would follow. Similar arguments were made about political institutions, with democracy emerging as decidedly progrowth.

But a new study by the McKinsey Global Institute challenges this consensus. Many of the growth superstars of the past 20 years have been ruled by communist, postcommunist, and one-party regimes with poorly performing institutions, measured by conventional standards. Countries that can’t or won’t get institutions right can grow, but antidemocratic elements may interpret the latest evidence from McKinsey as supportive of hardline rule.

The McKinsey report, Outperformers: High-Growth Emerging Economies and the Companies that Propel Them, focuses on two interlinked factors that have spurred long-term growth: (1) government policies that encourage capital accumulation and productivity gains and (2) the performance of large, globally competitive firms. These claims are well-substantiated and, thanks to work by my colleagues Marcus Noland, Caroline Freund, and others, not surprising to me. However, the lists of countries McKinsey indentfies as outperformers—countries whose growth rates had persistently outpaced that of the United States—was a surprise.

The report identifies seven economies as having outpaced US economic growth rates for over 50 years (1965–2016): China, Hong Kong, Indonesia, Malaysia, Singapore, South Korea, and Thailand. That these countries have grown steadily and consistently is hardly news: The East Asian Miracle has been the subject of sustained study since the 1990s. But the McKinsey report also identifies 11 “recent outperformers”: emerging markets that beat the benchmark for the past 20 years, namely Azerbaijan, Belarus, Cambodia, Ethiopia, India, Kazakhstan, Laos, Myanmar, Turkmenistan, Uzbekistan, and Vietnam. This list is a surprise because the governance models of these countries do not fit with what we thought we knew about governance and growth.

The global financial crisis—the epicenter of which was in the very set of economies thought to have gotten these institutions most right—as well as the rise of China have challenged conventional wisdom. The 2010s have given us a wider array of perspectives on the sources of growth and resilience in the face of economic crises, what my University of Denver colleague Ilene Grabel refers to as “productive incoherence.” The explanations include the resurgence of quasi-mercantilist state capitalism, the Beijing Consensus of state-controlled economic direction, and arguments about the importance of democratic governance. The various perspectives forwarded in recent years all focus on the macro-political economy: the political-institutional environment in which policies are made, rather than specific policies themselves.

So how do the recent performers stack up in terms of the governance institutions political economists think matter for growth? The short answer is “not very high.”

Rule of law—the extent to which agents have confidence in and abide by the rules of society, and in particular the quality of contract enforcement, property rights, the police, and the courts—is central to most of the early 21st century’s institutional discourse. Figure 1 shows the World Bank Worldwide Governance Indicators’ Rule of Law variable, which is considered state of the art. 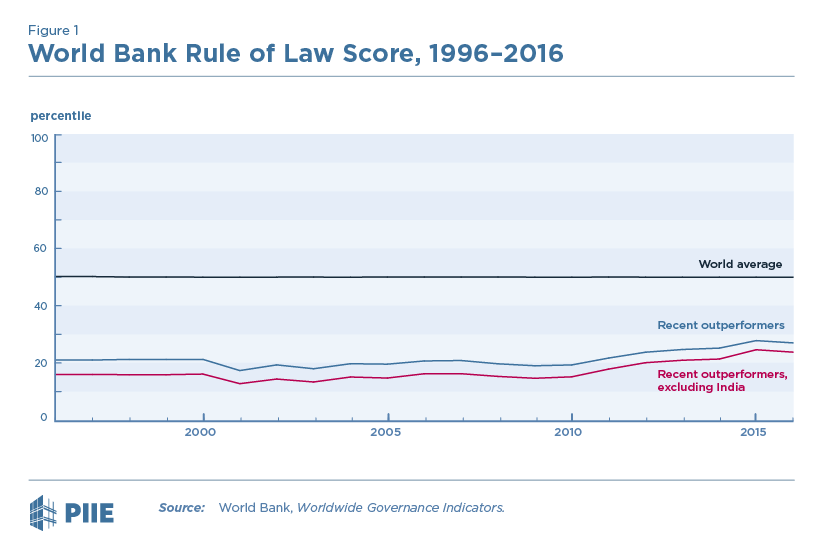 The mean of recent outperformers, especially when India is removed from the equation, typically hovers in the bottom quartile of the distribution. There is an upward trend here, particularly after 2009, but that may be due less to actual improvements in property rights enforcement or controlling corruption than to the way sustained growth creates a “halo effect.” The vast majority of governance and institutional indicators are based on expert survey responses, and survey respondents may at this point be hardwired to say, with respect to rule of law when they see sustained growth, “Well, they must be doing something right!”

What about democracy? In 2014, Daron Acemoglu and coauthors released “Democracy Does Cause Growth,” which demonstrated a causal effect of democracy on economic growth, operating through channels as diverse as boosting human capital–forming education expenditures to encouraging economic reforms and reducing investment-stifling social unrest. The political regimes in power in these recent outperformers are, save India, strikingly undemocratic. Measuring a concept like electoral procedural democracy is hard, but the state of the art comes from the Varieties of Democracy project, which normalizes democracy on a scale from one—the Norways and Swedens of the world—to zero—the North Koreas and Eritreas. Once India is excluded, we are left with a decidedly undemocratic set of regimes. As the world has gotten slightly more democratic over time, the recent outperformers have become even less democratic (figure 2). 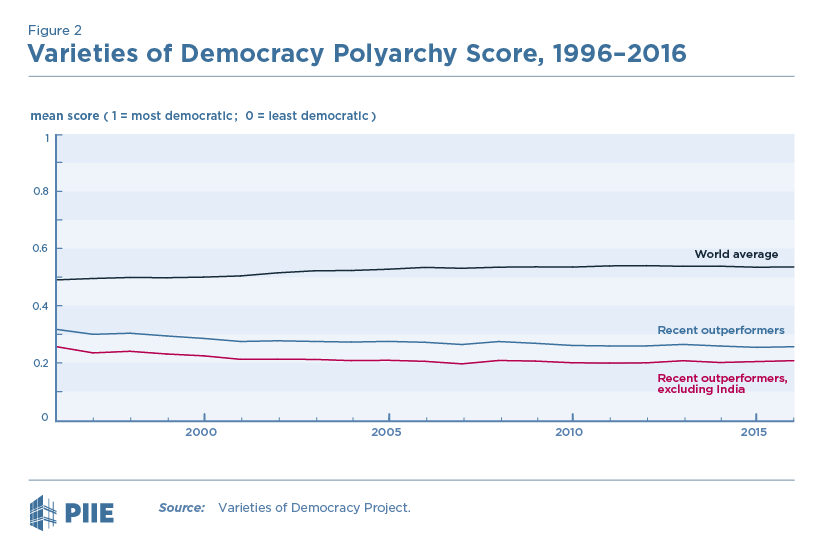 These trends seemingly point to a pretty unavoidable conclusion: With respect to recent outperformers, institutions don’t seem to matter very much.

The authoritarian regimes that rule in the recent outperformers are predominately communist and postcommunist in orientation, including five former Soviet republics, two Communist regimes, and three one-party or former one-party—and in the case of Myanmar, former military—regimes. The recent outperformers are not dominated by personalist dictatorships or monarchies; rather, they are ruled by some of the most “institutionalized” forms of authoritarian government to be found, in the sense of established in routinized, bureaucratized practices or customs. Many of these are reminiscent of, albeit less familiar than, the progrowth developmentalauthoritarian states that characterized East Asia in the 1970s and 1980s.

Communist regimes and one-party, developmental states are different from many other types of nondemocratic regimes in one important respect: Their governments and bureaucracies were designed to reshape the economy via central planning or export-oriented models à la the Asian Tigers. This orientation may not have always produced the best policy outcomes, but it did, in most instances, endow these countries with relatively educated cadres of bureaucrats, comparatively strong systems of education and public health, and closer, more coordinated business-government relationships. These features have facilitated industrial policy, capital channeling, and the pursuit of “national champions” in globally competitive industries that drive growth in developing economies. Thus, governance institutions likely matter a great deal—but perhaps not the specific institutions captured by conventional governance indicators.

This evidence can be viewed in at least two ways. On one hand, many countries mired in less-than-ideal governance institutions may still be able to generate poverty-reducing growth. On the other, democracy may be less important for growth than many of us would like to think, especially as democratic institutions are under attack.