Brazilian Misery: A Cautionary Tale for the US?

Former President Luiz Inácio Lula da Silva of Brazil has been rising steadily in the polls for Brazil’s 2018 presidential elections, despite facing several corruption charges. Why? Because some Brazilians perceive increasingly that he can make Brazil great again. After all, it was under his stewardship that Brazil experienced the rise of the middle class, falling inequality, substantial job creation, and the shrinkage of the informal economy between 2003 and 2010. Of course, Lula’s record of success was helped by external factors, such as rising commodity prices, and a significant inflow of foreign investments—trends that have more recently reversed. Many Brazilian economists fear that a new Lula government in 2018 will aggravate Brazil’s economic problems rather than turn them around. In arguing against a Lula comeback, some claim that Brazil has turned a corner and must not return to his supposedly failed policies.

But are Brazil’s prospects improving, as these economists claim? The reality is: So far, no. 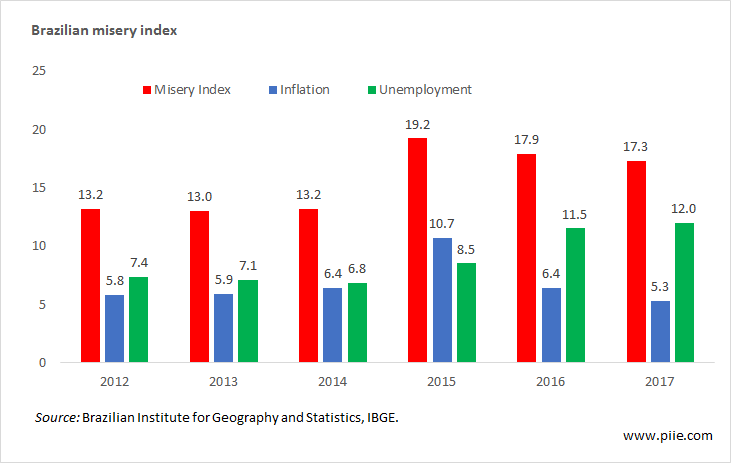 The figure above shows the misery index for Brazil, the sum of inflation and unemployment. Inflation has come down, but unemployment has risen steadily between 2015 and 2017, the result of years of populist and unsustainable policies under Lula’s second term in office and the administration of his impeached successor, Dilma Rousseff. It should continue to rise this year to 13 percent or more. Brazilian states have run out of cash to pay public servants, and a recent police strike in Espírito Santo, a state just north of Rio de Janeiro, led to over 100 dead in one weekend. Police forces are threatening state governments with similar strikes across the country because they are not getting paid on time. Meanwhile, the federal government and Congress are doing everything possible to avert the fallout from the soon-to-be-made-public Odebrecht depostions—Odebrecht is the construction company at the heart of Brazil’s massive corruption probe. The depositions allegedly implicate members of current president Michel Temer’s inner circle, most of his party (PMDB—the Brazilian Democratic Movement Party), and ally PSDB (the Brazilian Social Democratic Party).

As a result of Temer’s maneuverings and the perception that the economy is not improving to benefit the population at large, his approval ratings have tumbled to 10 percent, about the same ratings Rousseff had prior to her impeachment. Social tensions are on the rise, while stock markets have preferred to ignore risks associated with increasing instability, a situation that has some resonance in the United States. It should be recognized that the Temer government has been promoting crucial economic reforms, such as the successful introduction of a cap on public spending, a proposal for the reform of the social security system, a much-needed reformulation of Brazil’s state-owned development bank (BNDES), changes to regulations in the oil and gas sector, a proposal for labor market legislation reform, and a series of measures to boost productivity. However, this impressive record has been tainted by the corruption investigations and the failure to improve popular sentiment regarding the state of the economy.

Is Lula electable, given that he has been indicted on corruption charges? That is an open question. If he is, and becomes a candidate, he is likely to sweep next year’s elections. His opposition and some renowned Brazilian experts have decided to fight the risk with the narrative that all is going well. However, by denying a more complicated reality, experts are making the potential comeback of supercharged populism all the more likely. There are clear lessons here not only for the United States, but for other countries that continue to flirt with leaders who speak in the name of the common folk, but place them at greater risk with policy proposals that ultimately hurt the very same people they aspire to protect.

COVID-19 and the 2020 US presidential election: Did the pandemic cost Donald Trump reelection?