Several euro area leaders, including the German chancellor, her finance minister, and the French president, have recently referred to the need to “complete the banking union.” These public calls echo those made in more formal settings, in intergovernmental meetings and European Commission communications over the last half decade. They inevitably raise the question of what criteria should be used to assess the banking union’s completeness. A narrow interpretation, based on euro area leaders’ past commitments, equates it with breaking the bank-sovereign vicious circle; a more ambitious long-term vision for complete banking union implies the removal of all cross-border distortions within the euro area banking market. Even the minimalist version, however, entails more reforms than those publicly under current consideration.

“Banking union” has become a widely used expression to refer to the project of shifting banking-sector policy instruments from the national to the European level, but there is no official or legal definition of what it is or should be. Its first recorded use in public was made outside of officialdom (albeit on a suggestion from a European Commission official, Maarten Verwey), and it was gradually popularized in expert circles and the media. Euro area leaders endorsed banking union as their policy at a landmark summit in late June 2012, but waited almost a year until adopting the expression itself.

The same leaders, however, associated banking union from the start with a clearly stated objective, namely that “[i]t is imperative to break the vicious circle between banks and sovereigns.” That sentence opened the June 2012 summit statement and was identically repeated on several subsequent occasions. It refers to the mechanism, first observed by International Monetary Fund (IMF) scholars in 2009 and then increasingly acknowledged in European policy discussions, by which sovereign risk and bank risk are highly correlated with each other in Europe’s monetary union. Thus, a major banking-sector problem will cause fiscal distress (as happened in Ireland and Cyprus), and conversely, reckless fiscal management will result in a credit squeeze (as in Greece); the ensuing financial fragmentation across country borders impairs the operation of area-wide monetary policy and ultimately risks a break-up of the monetary union, giving rise to redenomination risk. This vicious circle, also referred to as the euro area’s “doom loop,” is best understood as a combination of direct and indirect financial linkages, summarized in the following chart. (Olivier Blanchard, then the IMF’s chief economist, appears to have been the first to produce this depiction of the bank-sovereign vicious circle in the summer of 2011, in internal IMF material that has unfortunately not been published.) 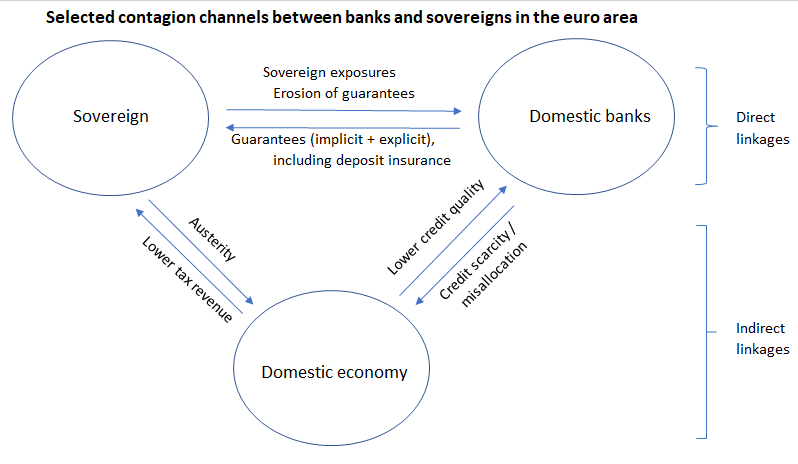 A “complete” banking union, then, must include a policy framework in which the bank-sovereign vicious circle is broken. This is evidently not yet the case, as many of the above depicted linkages have remained essentially intact since the start of banking union almost six years ago. Deposit insurance is still national, as have been ad hoc schemes to support failing banks and their creditors. (In just one country, Italy, and in the past year only, these have included national liability guarantees, the precautionary recapitalization of one major bank, and the reimbursement of losses incurred by retail savers and investors in senior debt). Meanwhile, most euro area banks still exhibit significant home bias in their sovereign exposures, namely the fact that their direct credit exposures to euro-area sovereigns remains concentrated in their home country. Furthermore, most euro area banks retain a largely domestic footprint, implying powerful indirect linkages through the domestic economy. In addition, a surprisingly large number of them are controlled or otherwise influenced by national governments and/or politics, which reinforces the bank-sovereign nexus. For example, a very significant share of the German banking system is directly controlled by local or state governments.

A maximalist version of “completing the banking union” would remove all national determinants of banks’ activity and business models, thus fulfilling the promise of a perfect internal market in which all cross-border competitive distortions have been eliminated. (The privatization of publicly-owned banks could be viewed as an integral part of that agenda.) The United States comes close to a seamlessly integrated banking market—a surprisingly recent development, which followed the deregulation and reforms of the 1980s and 1990s. Relevant distortions in Europe include wide national variations in banking regulation, taxation, accounting, auditing, insolvency law (both for banks and their clients), and the policy frameworks for pensions and housing finance, to name only a few. This maximalist agenda, which may be labeled a “single-market banking union,” has many things in common with the European Commission’s ongoing effort towards a capital markets union. Like the latter, it is a worthwhile long-term project that cannot realistically be completed any time soon.

But a single-market banking union may be placing the bar too high for proclaiming the project “completed.” The bank-sovereign vicious circle can arguably be broken with a much more limited package of policies that would address the critical linkages pictured above. This comparatively more modest approach may be called a “no-doom-loop banking union:” falling far short of the fully-fledged single-market banking union, but good enough to declare mission accomplished with a straight face. A recent Franco-German euro report, to which we both contributed, outlines one possible way to do that. It suggests:

Implementing such an agenda would inevitably entail a long transition period, but the corresponding policy choices are sufficiently straightforward and commonly understood for policymakers to make binding decisions shortly.

Banking policy steps currently under active discussion in the euro area including tackling non-performing loans that are a legacy of the past decade of crisis and those that will arise in the future; setting in motion a quasi-fiscal backstop to the Single Resolution Fund, a commitment all member states made in 2013; and finalizing the banking legislation proposed by the European Commission in November 2016 and whose subsequent discussion has stalled. All of these steps would be useful, even necessary, but none of them, even taken together, would plausibly amount to “completing the banking union.” For that, the very lowest threshold would be to effectively break the bank-sovereign vicious circle: politically more challenging for sure, but still doable this year if political leaders take their own banking-union-completion slogan seriously.