US labor markets continued to make progress in August, but the pace of the progress was slower than in recent months, and the state of the labor market remains uncertain because of conflicting signals from different measures. The generally more reliable employer survey showed that the US economy added 235,000 jobs in August, considerably slower than the average pace of over 1 million jobs in June and July and well below the 487,000 average in the first five months of the year. Job growth at this pace continued to narrow the jobs shortfall but still leaves the economy 7.2 million jobs short of pre-pandemic projections. At the same time, the unemployment rate fell by 0.2 percentage point, the same pace of reduction as in the first seven months of the year, while labor force participation was flat, and the household survey reported a sizeable increase in employment.

Overall, the jobs data were likely affected by the rise of the Delta variant and the associated increases in mostly voluntary social distancing and large declines in consumer confidence. For example, after several months of strong job growth, the level of employment in the leisure and hospitality sector was unchanged as consumers pulled back from in-person dining and travel. The Delta impact, however, is much smaller than the original onset of COVID which led to over 20 million jobs being lost. In this case, the Delta strain plausibly reduced job growth by hundreds of thousands of jobs—or about 2 or 3 percent of the economic impact of the initial virus.

High frequency data indicates the job openings remain plentiful and, in fact, may have been higher at the end of August than anytime so far this year. As a result, job openings likely remained higher than the number of unemployed, indicating continued tightness in the labor market where constraints on labor supply were an important driver of the overall jobs shortfall. The tightness of the labor market was also evident in the 0.6 percent increase in nominal average hourly earnings, twice the pace of increase in the first seven months of the year. Overall, however, nominal wages in the pandemic have not been sufficient to keep up with inflation let alone with the previous pace of real wage growth.

The three big open questions continue to be: (1) what is the relative pace of demand and supply improvements in the labor market, an issue that will affect the pace of nominal wage growth and price growth, (2) will the economy be able to close the full 7.2 million jobs gap quickly or will the last few million jobs be more difficult because some people have permanently left the labor force as a result of the pandemic, and (3) how will the ongoing surge associated with the Delta variant affect these developments, if at all, over the coming months?

The gap between the labor market and normality narrowed in August, but the economy still remains 7 million jobs short of pre-pandemic projections as shown in figure 1. 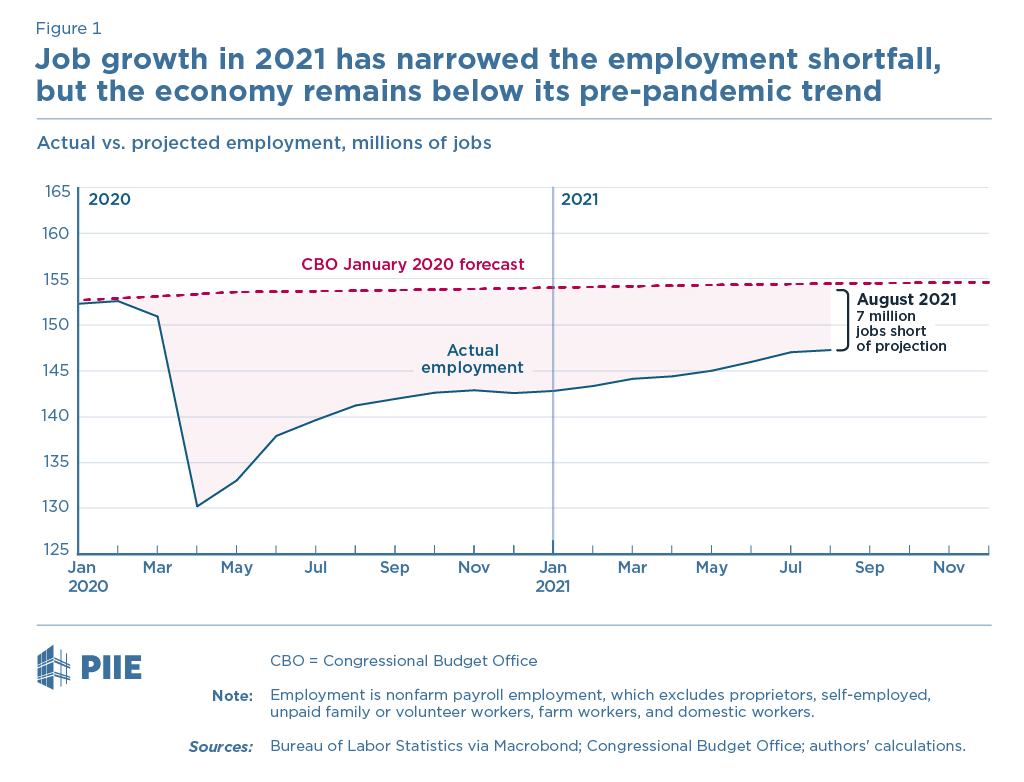 The unemployment rate and the "realistic" unemployment rate, which adjusts for misclassification and the unusually large decline in the labor force participation rate, tell a similar story (figure 2). Both measures continued to improve in August, though at a slower pace than in July, falling by 0.2 and 0.3 percentage points, respectively, and they remain well above the pre-pandemic level of unemployment. In total 1.9 million fewer people are in the labor force than would be expected given the overall state of the economy. This is consistent both with the still depressed labor force participation rate and employment-population ratio, which are 1.2 and 2.2 percentage points below their respective pre-pandemic values (adjusted for demographic changes).

Beyond the direct loss of employment income, longer spells of unemployment can make returning to the workforce more difficult as workers lose skills and personal connections. Research on long-term unemployment finds that it leads to lower wages on reemployment and negative effects on wellbeing for workers, their families, and communities.

While the number of workers who have been unemployed for 27 or more weeks surged as the pandemic progressed, as is typical in recessions, the increase was only about half as large as during the global financial crisis. Long-term unemployment continued to fall in August (figure 3) after a sharp reduction in July, suggesting that continued job growth is likely to help draw the long-term unemployed back into employment. 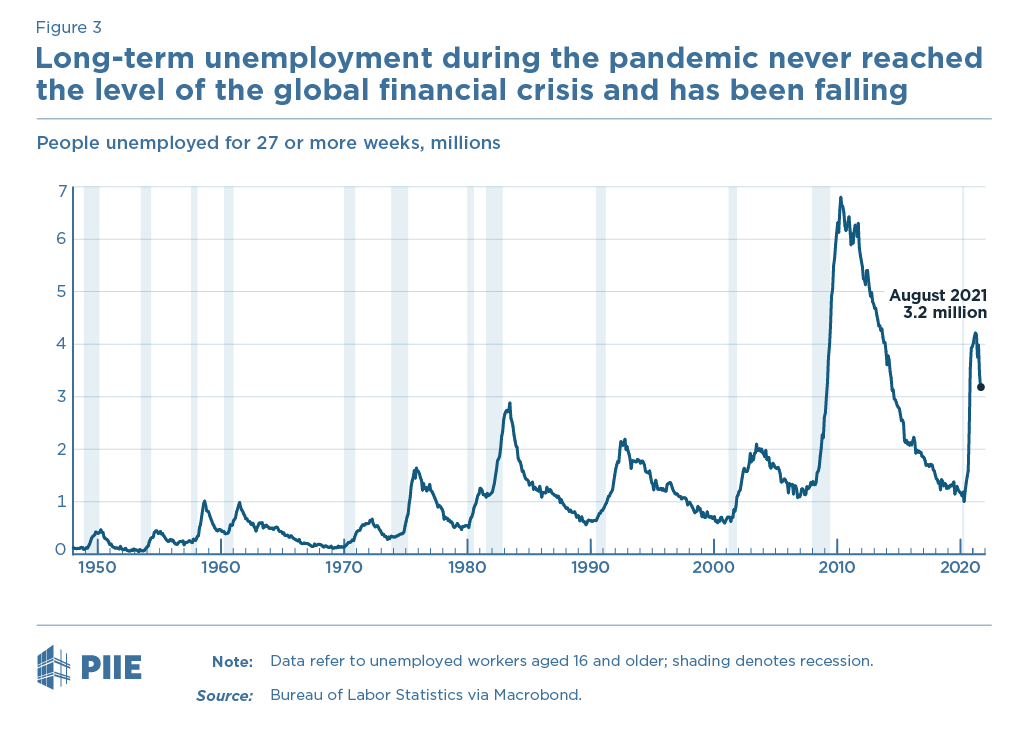 Those Working are Continuing to Work Longer Hours

One unusual feature of the pandemic recession has been that the average number of hours worked per week increased even as the number of workers fell by millions, as shown in figure 4. The initial spike at the outset of the pandemic likely reflected, at least in part, a compositional effect as workers with fewer hours disproportionately lost their jobs. But as the recovery has continued, average weekly hours have remained elevated, at 34.7 hours in August compared with the pre-pandemic average of 34.4 hours. This increase in hours, combined with a spike in productivity, explains why US GDP has now passed its pre-pandemic level, even while employment remains 5 million below its February 2020 level. 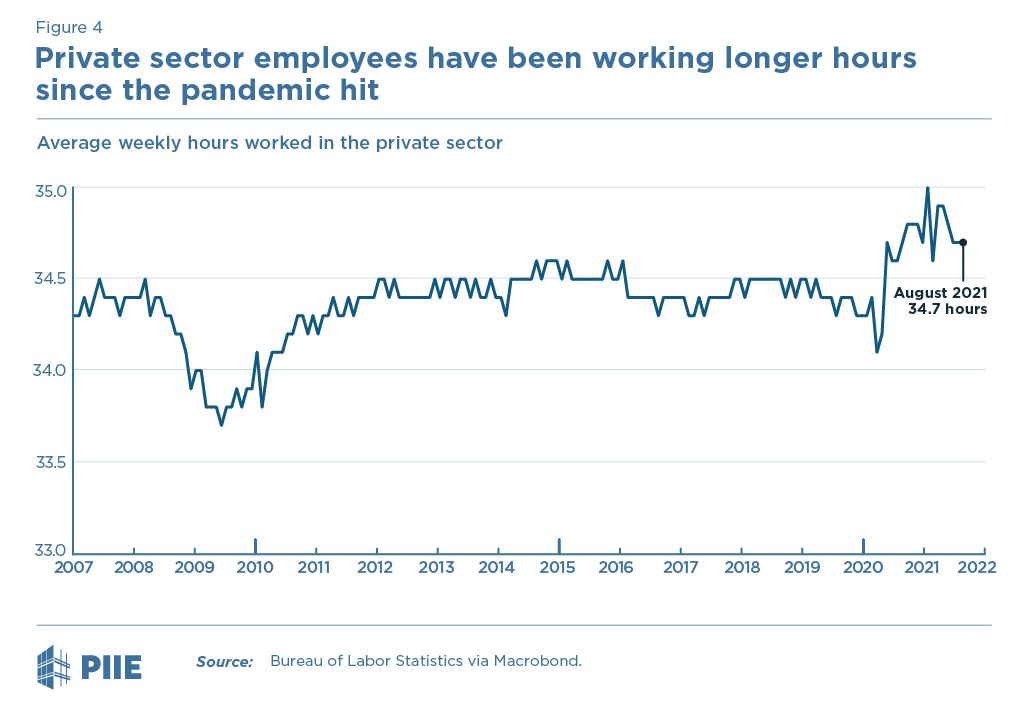 One sign of the tightness of labor markets is the fact that job openings and quits have remained elevated in recent months, showing both that jobs are plentiful and also that people have the confidence to quit their jobs knowing they will be able to find new ones. Data from the Indeed Hiring Lab shows that openings were 4 percent higher at the end of August then they were at the end of June, even though 1.3 million jobs have been filled in the interim and the Delta strain has spread rapidly. 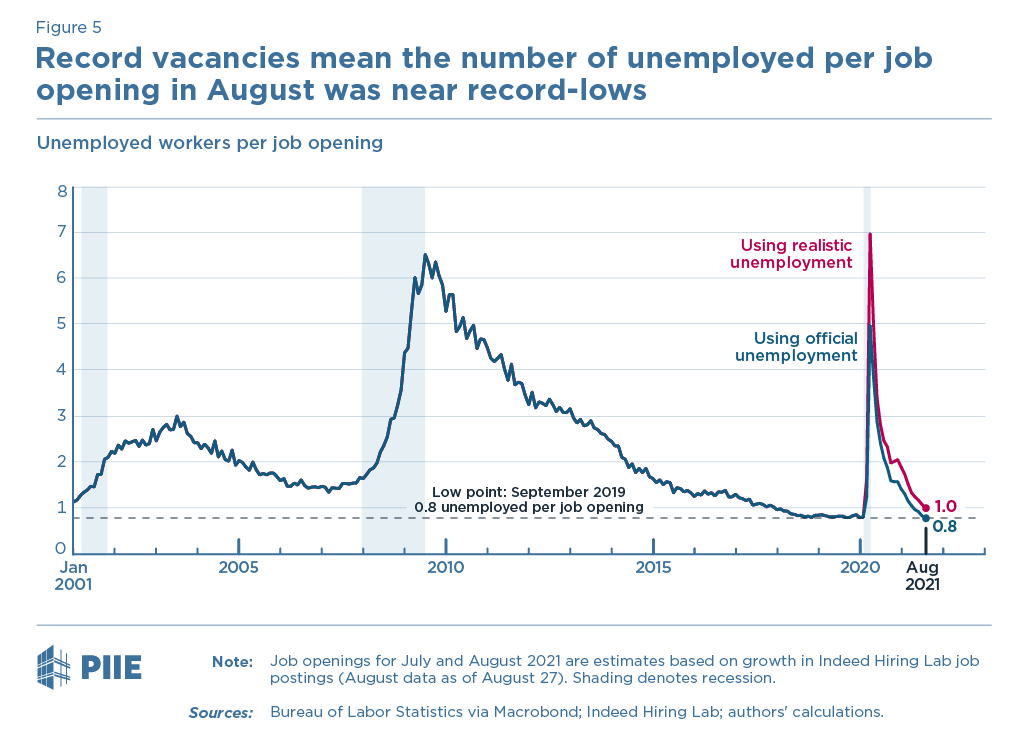 The best measure of the tightness of labor markets is wages. The pandemic period has been unusual in that very high unemployment did not result in any slower nominal wage growth for the workers who kept their jobs—instead wage growth continued at a relatively fast rate with the fastest wage growth for the bottom quartile of workers. Nevertheless, nominal compensation growth has not kept pace with inflation, so real compensation has fallen since prior to the pandemic. Wage growth continued to be strong in August at 0.6 percent from July, twice the pace of nominal wage growth in the first seven months of the year. In previous months, when much of the job gains came from relatively lower-wage sectors, like leisure and hospitality, the changing composition of employment meant that wage gains were likely understated. In August, with the slowdown in job growth in these sectors, this was likely less of an issue and the headline nominal wage gains may even slightly overstate true wage gains.

Much of the data for the August labor market reflects a period of increasing COVID-19 cases and hospitalizations, driven by the rise of the Delta strain. This likely had a substantial dampening effect on job growth last month. What impact this COVID-19 wave has on the economy in the coming months remains uncertain. The latest CDC forecasts suggest that new cases may reach a plateau in early September. Certain high-frequency indicators, like mobility and consumer spending, have remained fairly stable so far, while others, including restaurant reservations and falling consumer confidence, have shown a modest pullback by consumers.

The most important solution to the continued large shortfalls in the labor market is time—time for workers and employers to find the right match, time for the extent of the virus to improve, and time for expanded unemployment benefits to expire, as scheduled next week in the remaining states, or be replaced by more modest increases. Time will help with millions of jobs but it remains uncertain whether it will bring back all 7 million missing jobs or just a subset of them and how long this process will take.

The next many million jobs should be relatively easy to get back given the large number of openings and continued rapid economic growth. More difficult, will be the last several million jobs. Jobs may end up short of pre-pandemic projections if people have left the labor force for good (e.g., because of early retirement) or if other changes have permanently reduced labor demand (e.g., employers hiring fewer workers who are higher skill and higher paid). The hope is that all the jobs can be regained, productivity could rise to support wage increases, and continued high levels of demand could put the economy on a future path that is better than what was expected before the pandemic. Time will tell.