Economists are slightly better at predicting inflation than consumers

The jump in consumer price index (CPI) inflation in April 2021—to 4.2 percent over the previous 12 months—has sparked numerous stories in the press about the potential inflationary impact of President Joseph R. Biden Jr.’s American Rescue Plan and his proposed American Jobs Plan and American Families Plan.[1] A survey of consumers finds a modest increase in expected inflation over the next year, with little change to longer-term expectations. A survey of professional economic forecasters, which has a better track record of predicting inflation, shows little change in expected inflation over both the short term and the long term. Inflation has been declining or stable over almost the entire historical record of these surveys, however, so that neither has been tested for its ability to predict a significant and sustained increase in inflation.

Two previous posts (here and here) showed that bond yields (back to the 1950s) and the inflation component of bond yields (available since the 1990s) are not good predictors of future inflation. This post examines surveys of consumers and professional economic forecasters. Consumer expectations are shown to have little useful information about future inflation except for a brief period in the 1980s and then only for one year ahead. Expectations of professional forecasters help to predict inflation over both the short term and the medium term (up to five years), and this predictive power is not limited to the 1980s. 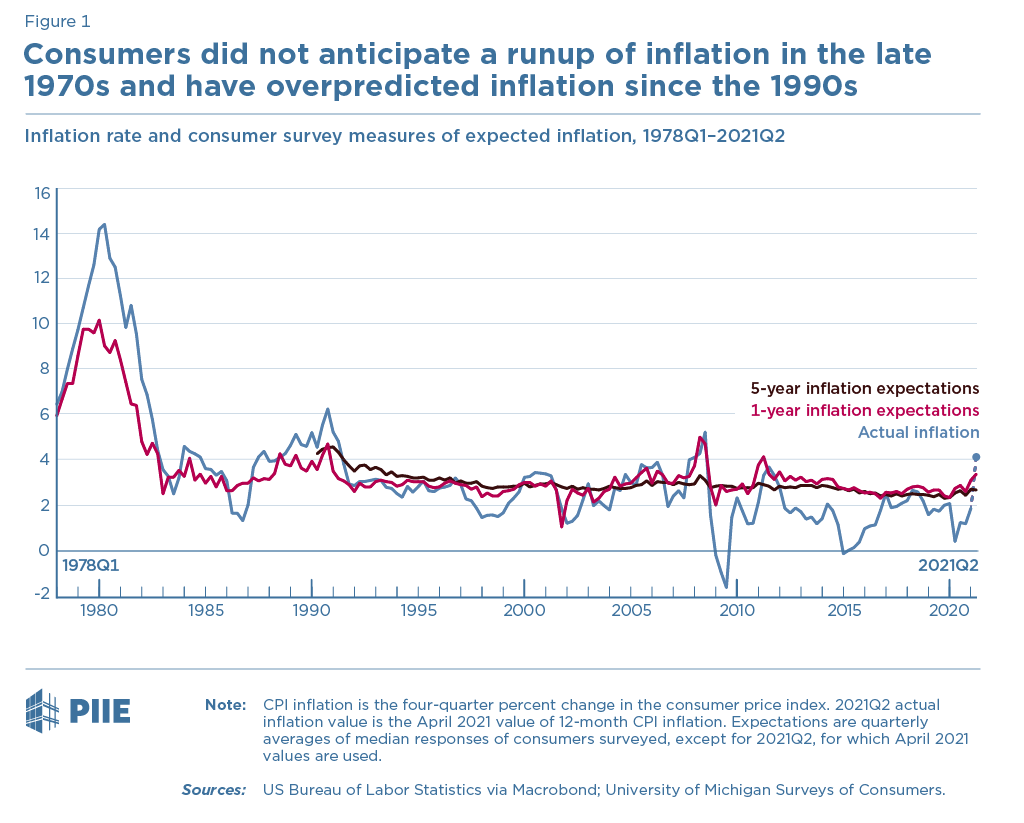 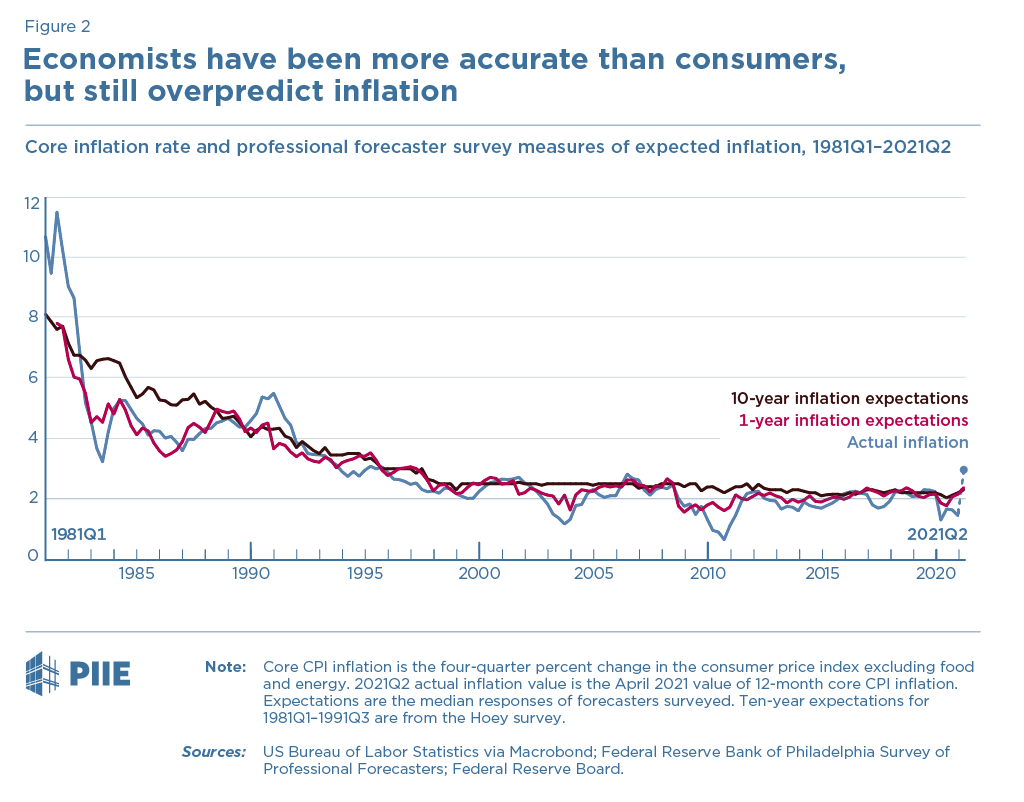 Table 1 presents statistical analysis of the predictive power of consumer surveys. Column 1 displays the results of a regression of 12-month inflation on the value of 12-month inflation lagged by 12 months and on the survey measure of one-year-ahead inflation lagged by 12 months. If the survey measure were the best possible predictor of future inflation, one would expect it to have a coefficient of 1 and the constant term and lagged inflation term to have coefficients of 0. This is not far from the case, as the survey measure is highly statistically significant with a coefficient of 1.07, whereas the coefficient on lagged inflation is small and not significantly different from 0. The constant term is negative and is economically, though not statistically, significant. A large negative constant term is further evidence that the survey measure overpredicts inflation on average. The regression in column 1 finds that movements in survey expectations tend to be good predictors of movements in future inflation, even if the level of future inflation generally tends to be lower than the level of expectations. The overall predictive power is fairly high, with an R2of 0.65.

Column 2 presents the same regression limited to a sample that drops expectations surveyed prior to 1990. This removes the large swings of inflation in the late 1970s and early 1980s. Since 1990, consumers have not been good predictors of inflation. Indeed, inflation tends to move in the opposite direction from consumer expectations, as denoted by the negative (though not statistically significant) coefficient. The R2 is much smaller than that in column 1, indicating little predictive power.

Column 3 repeats the regressions of columns 1-2 using the five-year-ahead survey measure instead of the one-year-ahead measure. This medium-term projection became a regular part of the survey in 1990. Two measures of lagged inflation are included, a 12-month measure and a 60-month measure that corresponds to the time period of inflation being explained. A longer lag of past inflation may provide a better guide to future inflation over a longer horizon. Both inflation measures and the survey expectations are lagged 60 months, because the goal is to measure predictive power over a five-year horizon. None of the variables is statistically significant, but the long lag of inflation has a much larger coefficient than the short lag and the survey measure. Overall, it appears that consumers are not good forecasters of inflation over the short term and the medium term since 1990.[4]

1. The American Rescue Plan, passed in March 2021, authorizes $1.9 trillion for public health measures and support to households, businesses, and states as the economy gradually emerges from the COVID-19 pandemic this year. If enacted, the other plans would spend several hundred billion dollars per year over the next five to ten years and raise taxes to cover most of the additional spending.

2. The consumer survey is conducted monthly. The figure displays quarterly averages of survey results and quarterly inflation to smooth through minor monthly variations.

3. Observations from 1981Q1 through 1991Q3 are based on a survey conducted by Richard Hoey and obtained via the database of the Federal Reserve Board’s FRB/US economic model.

4. These results are not sensitive to including a lagged change in gasoline prices, which is significantly correlated with consumer expectations of inflation.

5. None of the results in table 2 are sensitive to including lagged changes in gasoline prices.

Overheating debate: Why not in Japan?

In conversation: US inflation and policy outlook with Joseph Gagnon