After weeks of floundering, the European Commission on February 3 approved a fiscal austerity program proposed by Greece aimed at restoring sustainability to the country's finances and bringing down the country's budget deficit—and avoiding a sovereign default. Then on February 11, EU leaders themselves endorsed the same plan, while vaguely noting that "Euro area member states will take determined and coordinated action, if needed, to safeguard financial stability in the euro area as a whole." before tagging on at the end that "The Greek government has not requested any financial support."

By taking these actions, Europe's leaders have made Greece a eurozone problem (in the process taking the noneuro members of the European Union off the hook, including the United Kingdom). They also seem to have ruled out direct IMF financial support with a further statement that "The Commission will closely monitor the implementation... drawing on the expertise of the IMF."

It is not surprising that EU leaders avoided an explicit definition of any "determined and coordinated action" they had in mind. After all, just as taxpayers anywhere recoil from bailing out rich but incompetent bankers, other eurozone country taxpayers in, say, Germany and France1 are certain not to look kindly on their money coming to the aid of hitherto free-spending Greeks, who after all still can retire at an earlier age and with higher public pensions than they can.2 The moral hazard aspect of sovereign bailouts looms even larger than when banks are involved and few countries are seen as less deserving than Greece.

The real question now is whether this program can be enforced and who will enforce it. Here the answer is rather surprising.

The envisioned program adopted by the European Commission would reduce the Greek government deficit by four percentage points to 8.7 percent of GDP in 2010. Thereafter it would drop to 5.6 percent of GDP in 2011, 2.8 percent in 2012 and 2 percent in 2013. This is a very significant planned contraction of government expenditures, especially in a recession (albeit barely at just 1.1 percent negative growth) in 2009.

The European Commission or any other official EU institution, under the EU Treaties, cannot directly bail out Greece (though the eurozone, which has no defined legal charter, could). But it can certify the credibility of Athens's books, which might persuade the bond markets to let Greece get its house in order over time. The interesting part of the commission's action and EU leaders' endorsement of it is not, however, the scale of the Greek austerity program but the measures taken to send a message to the markets.

First, the Greek government will have to set up a contingency reserve amounting to 10 percent current expenditure. This is evidently a way of establishing some insurance against future Greek noncompliance and a testament to how little credibility Greece has today even among its fellow EU member states. Secondly, Greece is required to submit a series of quarterly "implementation progress reports," and be ready to adopt additional deficit reduction measures if deemed necessary by the European Commission.

Like Saint Augustine, most governments that commit themselves to "future fiscal chastity" do so—but just not yet! Indeed, Greece's troubles result from decades of fraudulent official data and failure to fulfill promises. The European Commission's assumption (as per European Union's leaders in liaison with the European Central Bank [ECB] and drawing on expertise of the IMF) of the mantle as de facto "fiscal overseer" of Greek government finances—similar in impact and scope to an IMF program, just without (so far!) any direct financial assistance to Greece—is clearly an attempt to remedy earlier failures to enforce the fiscal rules under the Stability and Growth Pact (SGP) adopted in 1997.

Greece is just the most extreme example of EU governments failing to live up to their own earlier fiscal promises. Today 19 other EU member states currently are also in breach of the SGP.3 But the toxic Greek combination of broken political promises and fraudulent fiscal data is almost in a class by itself, and it underscores the broader comprehensive failure of the EU fiscal surveillance framework under the SGP.

One reason for the failure of surveillance in the past has been the complacency of the bond markets, which accepted the theory that the SGP would bring about a harmonizing of European economic growth rates and, in turn, a convergence of EU government bond rates after the announcement and introduction of the Euro in the late 1990s. Upon euro adoption, the financial markets rewarded all countries with "low German interest rates," irrespective of their long-term economic fundamentals.

In retrospect, this "convergence trade"—betting that all eurozone countries would eventually converge toward the European average in terms of wealth levels and government fiscal sustainability and that they should therefore have the same interest rates—seems as misplaced as the markets' overlooking the risk of subprime mortgage securities in the United States. Despite some concerns over Greek government finances and statistics, the markets were not paying attention, as illustrated in figure 1. 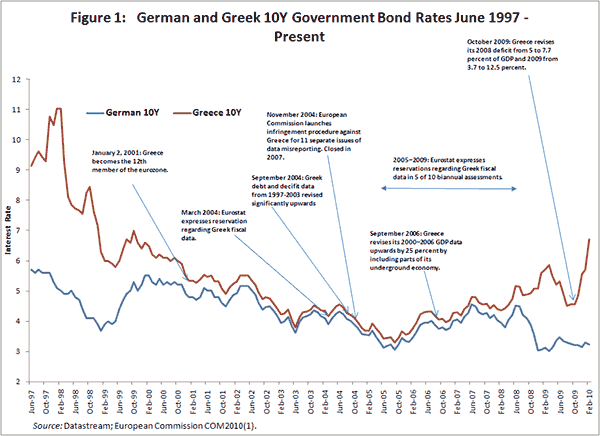 Figure 1 shows how Greek government bonds converged dramatically toward the German benchmark in the period prior to euro entry on January 2, 2001, and maintained this essential parity with German benchmark bonds, even though its announced government debt levels never dropped below 95 percent of GDP, and widely published concerns surrounded the validity of these frequently (and always upwardly) revised debt data.

Only after the global financial crisis by mid-2008 did the markets decide that Greek government bonds—unlike the German benchmark bonds—were not a "safe harbor" anymore. The latest and very large upward revision of Greek deficits served to overthrow the longstanding bond rate convergence model, sending the price of Greek bonds downward.

The widening of bond price spreads between Greek and German bonds means that the European Commission now has a new powerful ally in the markets as it tries to compel Greece and other member states to pursue fiscally sustainable policies. Rather than threatening Athens with "issuing another report that no one reads," a practice for which it is famous, the European Commission can now—with financial markets backing it up—instead say "stick to the SGP rules and put your fiscal house in order or the bond market vigilantes will get you!" (It can send the same message the other 19 member state miscreants.)

Will the European Commission's quarterly "implementation progress reports" combine with market reactions to exercise sufficient leverage over Greece? That remains to be seen, but the Commission will hope so.

But the new alliance of European Commission reporting and market vigilance (or anxiety) raises several longer-term issues for an era where financial markets are likely to increase scrutiny of European (and other) governments' fiscal policies.

First, is Brussels competent, willing, and politically able to sustain the role of an IMF-like "bad cop" demanding fiscal austerity from Greece should violence erupt in the streets of Athens? The European Union's longstanding desire for popularity in Europe and the ability of a single recalcitrant member state to block EU decision making is well established. The EU leaders' statement from February 11 is silent on this issue, noting only that IMF expertise can be drawn upon, but fails to offer a credible political commitment to EU institutions in the event of sudden hostility from the Greek population and elected politicians.

Second, while financial markets, the European Commission and EU leaders clearly look at Greece through the same glasses right now, it is far from obvious that the two will continue to do so in the future or will see eye to eye on the fiscal situation in other member states with high debt levels. Having embraced the coercive power of financial markets to lean on Greece, the European Commission and EU leaders might get more than they bargained for if or when the spotlight turns to Portugal or Spain, which also have fiscal credibility problems. It is clear that EU leaders, with their February 11 declaration of Greece being a "eurozone problem," are hoping that market contagion will not spread to Spain, as it is evident that other relevant eurozone countries simply do not possess the financial means for credible "determined and coordinated action" should the need arise with a country the size of Spain. There is the final broader point of how European economic convergence can be restored in a future of higher government debts throughout the European Union, aggravated by higher long-term interest rates for the weaker countries.

Perhaps Greece and the other weaker eurozone links will finally implement the structural reforms that they should have adopted upon entering the eurozone in the first place, or perhaps European living standards will gradually grow apart again, undermining the European Union's raison d'être. EU leaders and the Commission will be hoping for the former but fearing the latter.

1. With large eurozone members Italy and Spain already in considerable financial trouble, this in effect will mean that the vast majority of the cost of any potential eurozone "determined and coordinated action" will fall on Germany and France.

2. The gross replacement rate expressed (as percentage of average individual preretirement earnings) from public pensions in Greece is over 95 percent, against just 53 and 43 percent in France and Germany. Greece has essentially no private pension funds and is wholly dependent on public pensions. Early retirement in Greece is available from age 55, together with Portugal the lowest in the European Union. All data from the Organization for Economic Cooperation and Development (OECD) Pensions at a Glance 2009, OECD Paris.

3. See the European Commission website. Obviously, with 20 out of 27 member states in breach of the rules it is impossible not to question the wisdom and design of the SGP rules themselves.

A Crisis Averted in Greece, but More Problems Lie Ahead

Greece Does the Right Thing, after another Turbulent Week in the Euro Area

Another Greek Lesson: As Always Hard But Inspiring