And will countries agree on new rules to reform the system?

The current international tax system was designed to allocate taxes across countries, but the system is rife with misuse and needs updating to ensure the biggest firms are meeting their tax obligations. Two landmark proposals to reform the international corporate tax system in the digital era while minimizing abuse of tax havens have gained growing support in the last year. As of July 9, 2021, 132 countries had signed on to a two-pillar plan advanced by leading industrial democracies in the Organization for Economic Cooperation and Development (OECD), which would reallocate some countries' taxing rights over the largest and most profitable multinational firms and introduce a minimum global corporate tax rate.

This guide demonstrates some ways companies have been gaming the system to minimize their tax liabilities and explains how the two pillars of the OECD reform proposals work and what they can—and cannot—do to make the system fairer.

How is the international tax system supposed to work?

The current international corporate tax system dates from a model developed at the League of Nations after World War I, which called for taxing companies in jurisdictions where they produce products and are headquartered.

The governments of countries where inputs are made and products are assembled may tax the profits during each stage of production. The country where the company is headquartered taxes the firm's total profits. The market country, where the firm's final product is sold, has no taxing rights except for sales taxes on consumers; multinational firms are not required to pay taxes to the governments of market countries. Sales profits are instead taxed in the headquartered jurisdiction as part of the firm's total profits (figure 1). 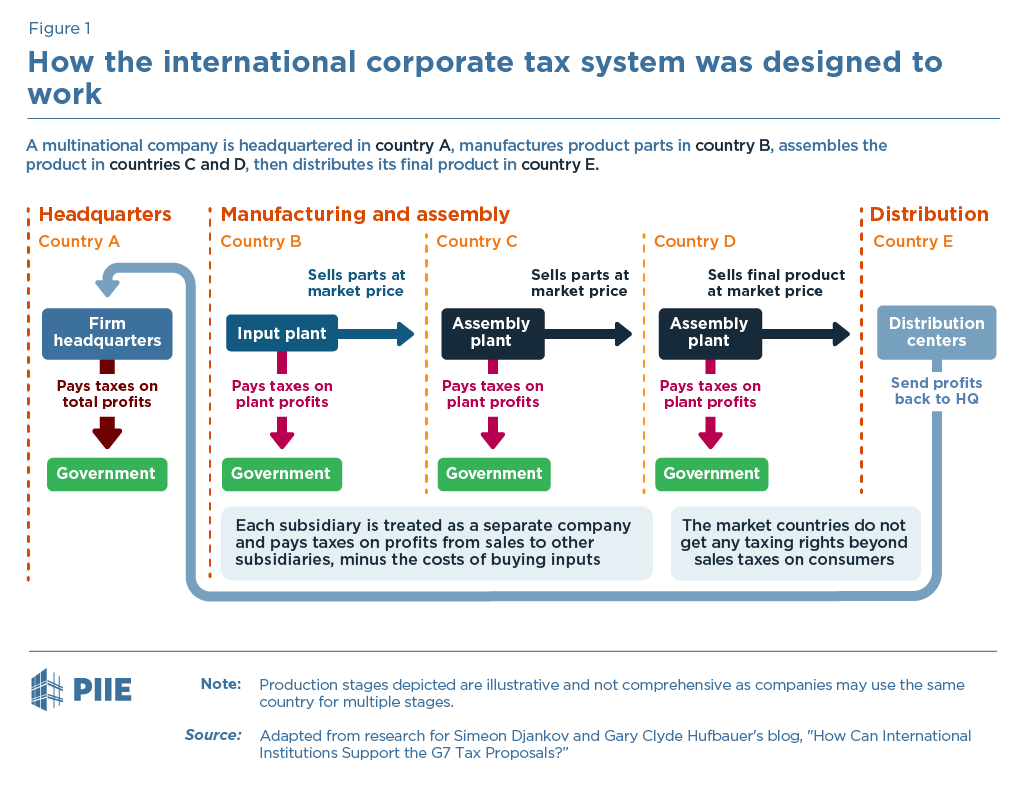 When a firm repatriates its profits back to its headquarters and calculates its taxes owed to the country of that headquarters, foreign tax credits and the territorial tax system allow it to exclude from its tax obligations those profits that were previously taxed in a foreign jurisdiction, including profits from assembly and input plants. Thus, only profits not previously taxed in other jurisdictions are subject to taxation where the firm is headquartered.

The system is aimed at ensuring that each country in the supply chain receives its fair share of taxes, with the national entities of a multinational company taxed as though they are separate firms. A plant making car parts in the United States, for example, pays tax to the US government on the profit it makes from selling the parts internally to an assembly plant abroad, minus its costs.

To ensure fairness, each affiliate in the supply chain is supposed to charge other internal entities the same price for its products that they would find on the open market.

Two ways companies use the system to minimize their tax bills 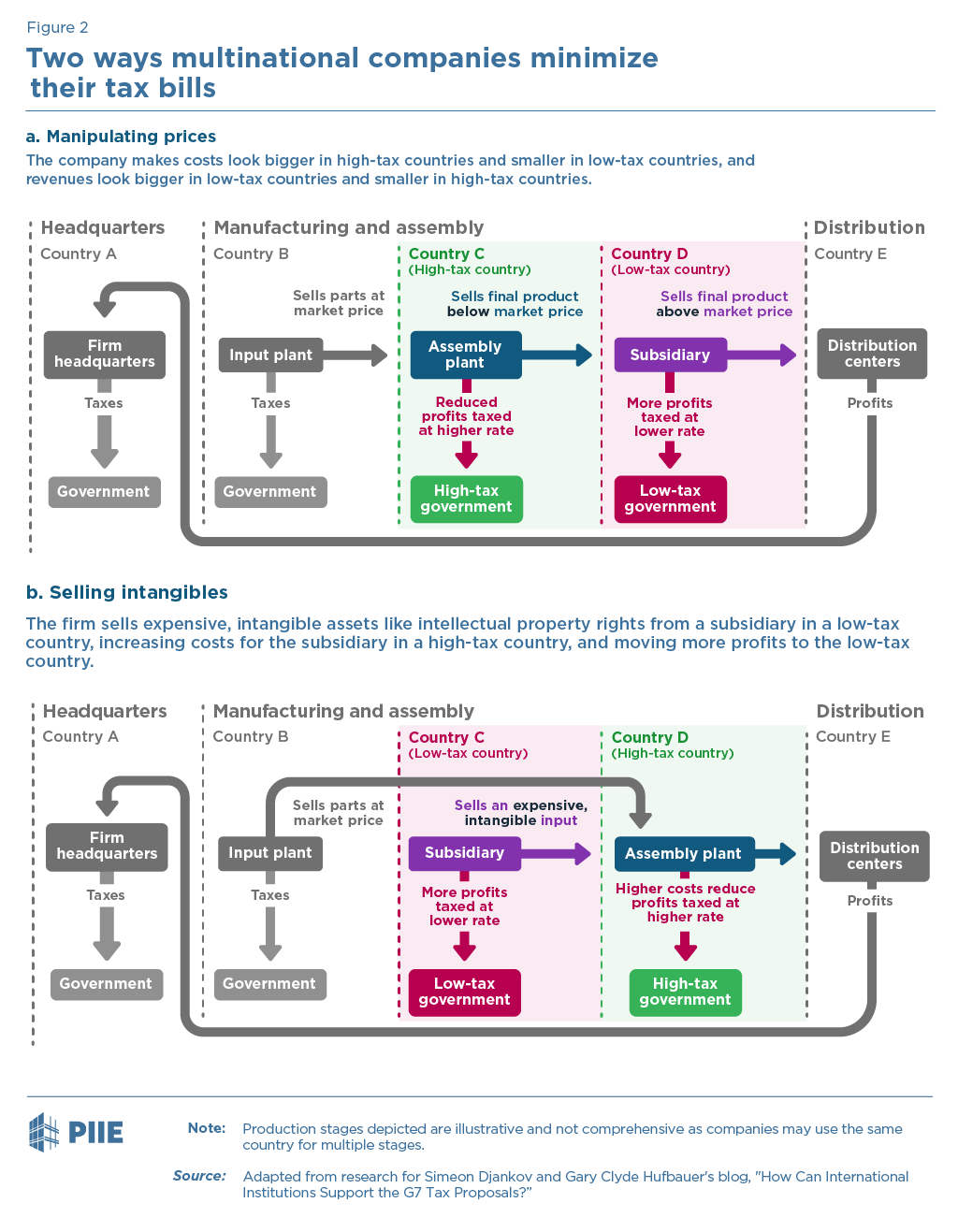 Tax authorities in many countries challenge this sort of manipulation, but the techniques are hard to discern or prove. Sales prices can be affected by the timing, volume, and period of warranty for the goods produced. Tax authorities often lack the resources to enforce regulations because of the difficulty of testing prices against the open market for every intracompany transaction.

OECD pillar one: Reallocating some tax rights to market countries

The first OECD proposal, known as pillar one of the tax reforms, reallocates taxing rights to grant market countries—the jurisdictions where sales occur or users are based—some tax revenue (figure 3). Companies with a global revenue of more than €20 billion (reduced to €10 billion after a review starting in the seventh year) and pre-tax profits that exceed 10 percent of costs would have a portion of their profit become eligible for market countries to tax. 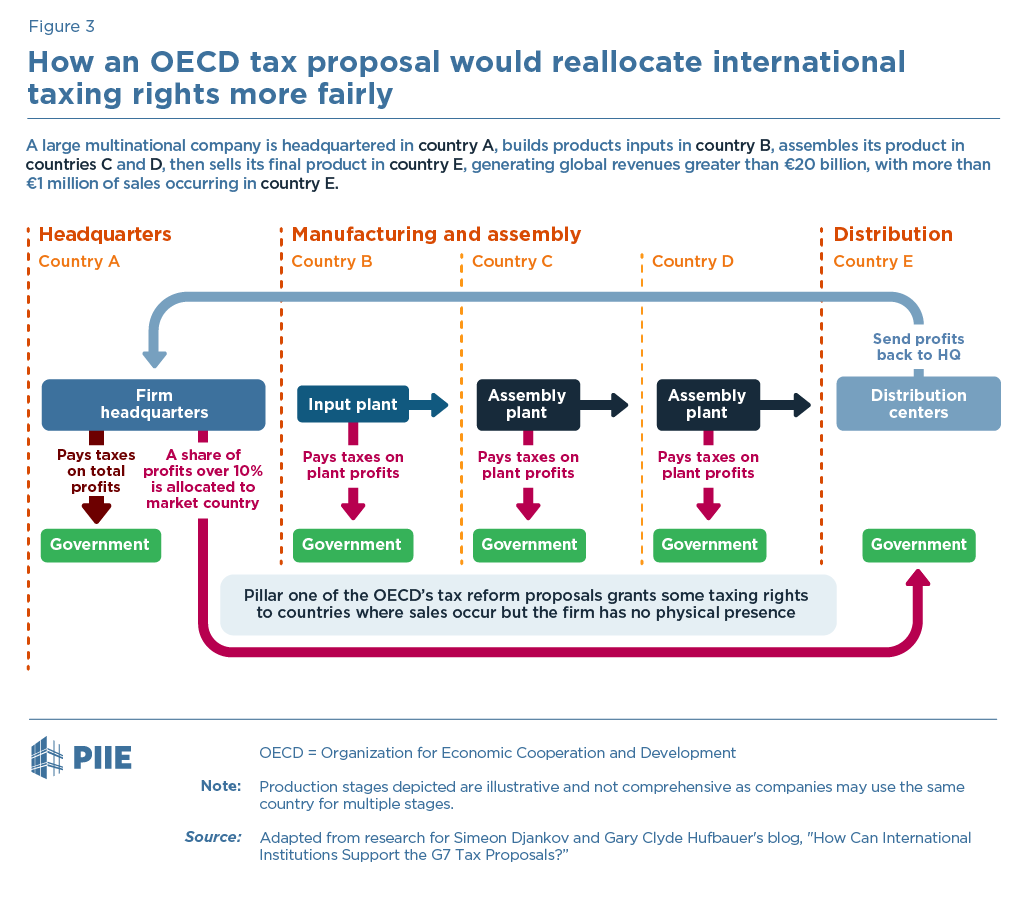 The revenue and profit thresholds mean only the largest and most profitable multinational firms will be affected and avoids placing a large compliance burden on smaller firms. The OECD estimates that 780 multinational firms record profits greater than 10 percent and could see a share of profits allocated to market jurisdictions.

Not every market country will receive taxing rights. At the July negotiations, countries decided that rights would only be allocated to market countries that generate at least €1 million in revenue for a firm. Smaller countries (with GDP lower than €40 billion) would receive an allocation if sales in their jurisdiction exceed €250,000.

To simplify the process and reduce the administrative burden imposed on firms, market countries would not set the tax rate applied to the firm's residual profits. The tax allocation to market jurisdictions would be a predetermined share of residual profits—the exact percentage is still to be negotiated. The portion would be divided among the various jurisdictions based on the share of the residual revenue derived from each market, after deductions for money spent on marketing and distribution activities already subject to taxation.

It is still unclear who will be responsible for collecting and analyzing firms' annual data. Without an independent broker to verify and oversee reallocations, disputes between firms and national governments would be likely. The International Monetary Fund (IMF) has the necessary experience, expertise, and reach. It could act as an honest broker both in assessing which multinational firms meet the reallocation criteria and in distributing tax revenues to the market countries.

The second part of the proposed OECD reforms would introduce a new global minimum corporate tax rate designed to prevent companies from shifting profits to low-tax countries to minimize their tax liabilities.

Governments would still be free to set corporate tax rates at any level, but if subsidiary profits are taxed at a rate lower than 15 percent in a particular country, the government of the country where the company is headquartered can apply a top-up tax to bring the tax rate applied to profits recorded in the low-tax jurisdiction up to the 15 percent minimum (figure 4).

For example, if a firm has a subsidiary in a low-tax jurisdiction with a corporate tax rate of 12 percent, the government of the firm's country of residence can apply a top-up tax on profits booked in that jurisdiction of 3 percent, bringing the taxes paid on those profits up to the 15 percent global minimum. 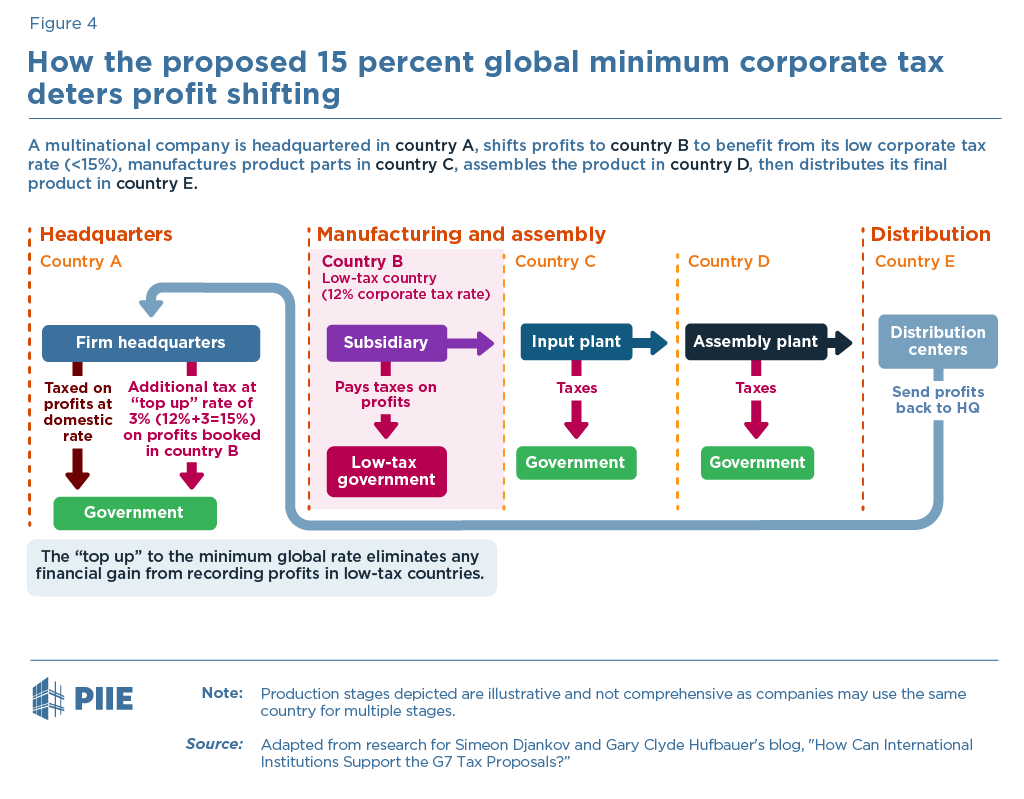 Governments may adopt other tax perks to attract firms

Even if both OECD pillars are adopted and ratified by members, the proposals would not cover all the strategies multinational firms employ to reduce tax bills. Low-tax countries around the world could continue to lure multinational corporations to their shores with other tax perks. One such perk would be research and development (R&D) tax credits, which firms already take advantage of to mitigate their tax obligations (figure 5). 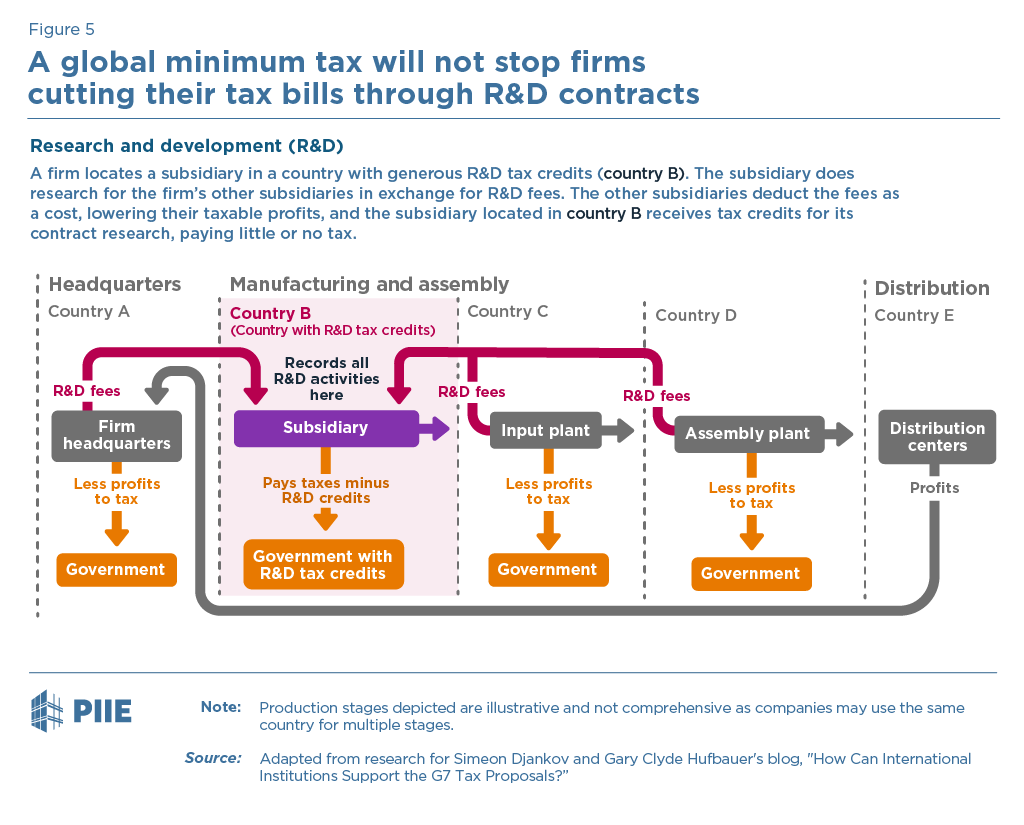 Strategically locating R&D activities allows firms to reduce their taxable profit in high-tax jurisdictions while enjoying a financial windfall from tax credits. A firm establishes a subsidiary in a country with generous R&D tax credits; other subsidiaries then contract this subsidiary to carry out their R&D activities. The firm registers all R&D activities in the country with the highest R&D tax credits, regardless of where the research work actually takes place—thus maximizing its tax rebates. Simultaneously, the R&D fees paid by other subsidiaries are deducted as costs, lowering the taxable profit in other jurisdictions.

Without additional legislation, competition between governments to set the lowest corporate tax rate could be replaced by competition to grant the most lavish R&D tax credits, allowing multinational companies to continue to erode tax revenues and maximize profits.

Previous efforts to reform the international corporate tax system have been limited to voluntary guidelines and model treaties. If countries can agree to a binding convention on international corporate tax, it would be the first of its kind. The OECD intends to have members negotiate remaining details on the two pillars and decide on a strategy for adoption in October 2021, with countries beginning implementation in 2023. But many technical issues remain unresolved. Some countries that have lured corporations to their borders are resisting reform. Defining how and where taxable profits are to be reallocated among countries remains a big challenge. If the same group of countries cannot reach agreements over fishery subsidies or carbon emissions in other venues, will they be able to reconcile their differences over corporate taxation?

Even if members can agree on the details of the design, the reforms may take years to be written into national tax laws and take effect. Some countries may need to enact new laws to revise or repeal domestic tax policies incompatible with the new proposals, leaving the reforms at the mercy of national political tensions and gridlocked legislatures. Getting countries to agree on the two proposals will accordingly be only the first step on the long path to reform and creating a fairer, more modern international tax system.

Sign up for the PIIE Educational Resources newsletter for a roundup of the latest content geared towards students and educators.

How can international institutions support the G7 tax proposals?