Inflation fears and the Biden stimulus: Look to the Korean War, not Vietnam

The debate among economists over the size of President Joseph R. Biden Jr.’s proposed $1.9 trillion stimulus package has drawn attention to past cases of inflation spurred by big government spending. Both sides have cited the Vietnam War of the 1960s as a precedent of an outbreak of inflation that would be difficult to reverse. Looking to the past can be misleading, however. The spending boom of the late 1960s—fueled not only by the war but by the Great Society programs—was long-lasting, whereas the Biden plan is a temporary response to a crisis. Moreover, the Federal Reserve’s passivity in the face of rising inflation in the 1960s is not likely to be repeated. A better historical analogy may be the large but temporary surge in inflation in 1951, related to the Korean War, which did not pose any lasting damage to the US economy.

Olivier J. Blanchard and Lawrence H. Summers raise concerns that spending in the package may be inflationary and that the Federal Reserve may not be able to contain inflation without creating a financial crisis or tipping the economy into recession. Paul Krugman and Wendy Edelberg and Louise Sheiner are less concerned, arguing that the translation from federal outlays to economic activity and inflation may be much smaller than historical patterns would suggest. However, Krugman, Edelberg, and Sheiner ignore the possibility that a successful vaccination campaign that reopens important service industries might unlock a flood of spending from the large backlog of household savings last year.

Government spending during the Vietnam era was long term

Both sides discuss similarities and differences of the likely outcome under the Biden package with the US experience of the 1960s, when military and social spending under President Lyndon B. Johnson pushed the unemployment rate 2 percentage points below current estimates of the then-prevailing natural rate, where it remained for four years, 1966–69. Inflation rose from 1.2 percent in 1964 to 5.9 percent in 1969.[1] The Federal Reserve finally tightened policy in 1969, causing a mild recession in 1970, but inflation never fell below 3 percent. The lack of a coherent and sustained Fed response to inflation set the stage for even larger spikes of inflation in the 1970s.

But there are important differences between 2021 and 1966. President Johnson’s Great Society programs reflected a long-term commitment to fight poverty, and the Vietnam War dragged on for almost a decade. In contrast, President Biden’s COVID-19 package is meant to be a temporary effort to overcome the pandemic and get the economy restarted.[2] The Federal Reserve was strangely silent about its goals and intentions in the 1960s and 1970s, whereas now it clearly states its intention to keep inflation close to 2 percent on average.

A better template may be the Korean War of 1950–53. This was a much shorter war than the Vietnam War and was expected to be so from its beginning. There was no coincident rise in social spending. Thus, the overall boost to spending may have been seen as more temporary than during the Vietnam War, as is the intention of the Biden package.

The Korean War started when North Korea invaded South Korea in June 1950 and ended with an armistice in mid-1953. As displayed in the following figure, US inflation soared in late 1950 but returned to around 2 percent in 1952 and 1 percent in 1953.[3] 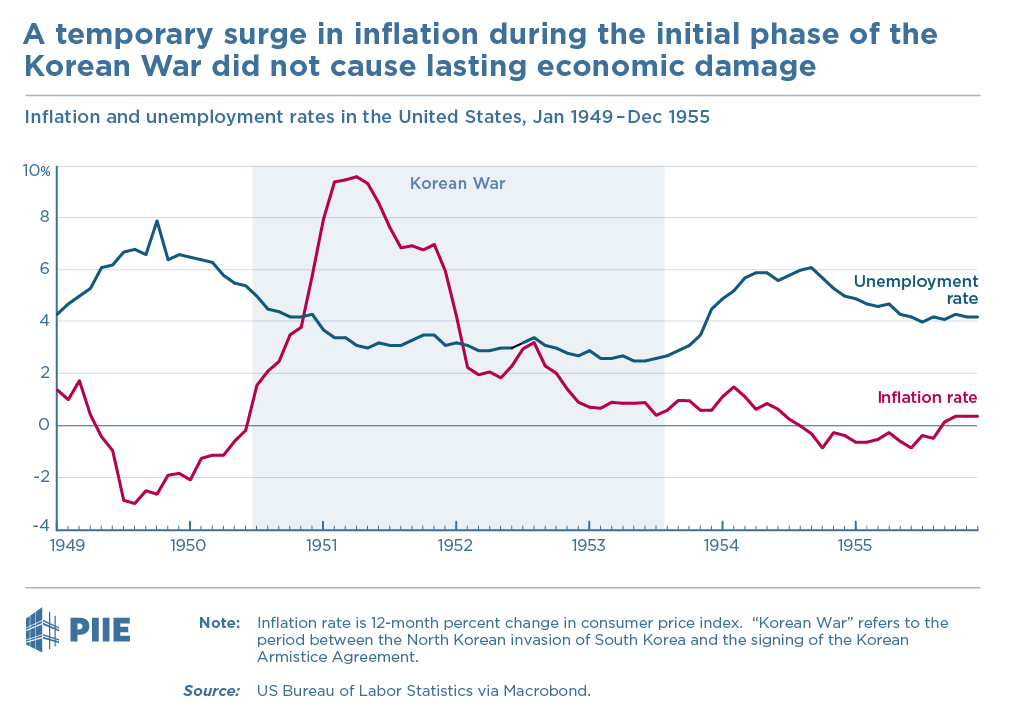 In early 1950, the US economy was recovering quickly from the recession of 1949. The unemployment rate had peaked at 8 percent in October 1949 but dropped rapidly to 5.4 percent at the outbreak of the war in June 1950. Mobilization pushed unemployment down to 3 percent by early 1951, where it remained until the end of the war.

Total spending in the US economy (nominal GDP) soared 18 percent in 1950 (on a Q4/Q4 basis) as consumers and businesses ramped up purchases to prepare for war production and the possibility of renewed rationing.[4] (In the event, rationing was not reimposed.) Military expenditures took over in 1951, as nominal GDP grew another 11 percent before returning to the trend growth rate of 7 percent in 1952.[5] After allowing for some recovery from the 1949 recession, nominal GDP arguably exceeded its prior trend by 10 percentage points in both 1951 and 1952.

If the COVID-19 vaccines succeed in allowing a near-complete reopening of the US economy in late 2021, spending may surge in 2021–23 at a rate comparable to that of 1950–52. The Biden fiscal package comes on top of a $0.9 trillion package passed in December; the two packages total 13 percent of GDP.[6] In addition, US household savings in 2020 were $1.6 trillion above the previous trend, representing another 7 percent of GDP in pent-up spending power. The bulk of both the 2020 and 2021 fiscal packages is targeted at low- and middle-income households, which tend to save little of their income. The closure of restaurants and entertainment venues in 2020 prevented households from spending a normal share of their income, but this forced saving is not likely to persist after COVID-19 has been suppressed.

The double-digit percent spending surge would hit an economy with excess capacity that is far below 10 percent. The Congressional Budget Office (CBO) estimates that the US economy was 3 percent below potential in 2020 Q4. Some economists believe that the gap is larger. For example, labor economist Adam Ozimek argues that the prime-age employment to population ratio is the best guide to potential output and that the United States was at potential output when this ratio hit an all-time peak in 2000. Based on that analysis, potential output may be 3 percentage points higher than the CBO estimate, and the gap last quarter would have been 6 percent.

Regardless of one’s view on the current output gap, reopening the restaurant, travel, and entertainment sectors should generate a self-sustaining rise in output even in the absence of fiscal stimulus and pent-up saving. The output gap would surely be less than 6 percent. A double-digit percent rise in spending would push the economy above anyone’s estimate of potential by more than has happened in decades.

As a result of these factors, inflation may surge temporarily. But, as long as the spending boom is viewed as a temporary readjustment and the Federal Reserve maintains its commitment to controlling inflation over the longer run, inflation should drop quickly. To demonstrate its anti-inflationary resolve, the Fed would need to raise interest rates quickly and significantly. But the increase need not be commensurate with the increase in inflation, nor need it be high enough to cause a recession. All that is needed is enough of an increase to prevent long-term inflation expectations from rising above the Fed’s inflation target. The best way to do that is to promise dramatically higher interest rates in the future if inflation does not fall back rapidly.

An episode of higher inflation, even if temporary, would present an ideal opportunity for the Federal Reserve to reconsider its 2 percent inflation target. The case for raising that target to 3 percent or a bit more is strong.

1. Inflation data are 12-month percent changes in the consumer price index from the US Bureau of Labor Statistics.

2. President Biden’s long-term infrastructure plan will be negotiated with Congress later this year. It is supposed to be financed by rolling back tax cuts for the wealthy and other unspecified tax reforms.

3. Wage and price controls were used in World War II and in the Korean and Vietnam wars. It is widely believed that these controls were only partly effective and delayed rather than eliminated price pressures (Gordon 1982). It may be that the rapid price increases of late 1950 occurred in anticipation of the imposition of controls in January 1951. Controls were removed in February 1953 with no apparent rebound in inflation.

4. Data are from US Bureau of Economic Analysis.

5. One difference with 2021 is that taxes were raised at the start of the Korean War to keep the federal deficit from rising significantly. This may explain why the Federal Reserve was able to keep interest rates so low during the war, with the Treasury bill rate rising only from 1.2 percent in June 1950 to 2.2 percent in June 1953. Data are from the International Monetary Fund via the Federal Reserve Bank of St. Louis.

6. Some of the authorized spending in the packages may not materialize because, for example, unemployment is lower than expected or state revenues are higher than expected. But most of the headline number is likely to be disbursed.

In defense of concerns over the $1.9 trillion relief plan