Lessons from East Asia and Pacific on taming the pandemic

This essay is part of a PIIE series on Economic Policy for a Pandemic Age: How the World Must Prepare.

The East Asia and Pacific region is one of the few global bright spots in the fight against the COVID-19 pandemic. Its success provides many lessons on containing infectious diseases at a low cost to the economy in an era of chronic pandemics. The experience in East Asia and Pacific varies among countries with diverse cultures, geographies, and political systems, but one thing is clear: rigorous masking requirements, testing, contact tracing, selective quarantines, border closings, and clear public health communication all helped to avoid the overwhelming economic dislocations that occurred in the West. The ability and readiness to deploy these tools, and to secure political support and compliance with public health measures, allowed both democratic and authoritarian countries in East Asia and Pacific to emerge from the pandemic with some of the lowest COVID-19 mortality rates in the world.

COVID-19 mortality rates vary substantially, but one of the most striking contrasts is between East Asia and Pacific and the United States and Europe (see map). Deaths from COVID-19 per million people reported by East Asian jurisdictions are much lower than in most Western countries, even though East Asia and Pacific is one of the most densely populated and globally connected regions on earth. A case in point is China. Despite the initial failure in containing the local outbreak and undergoing a costly lockdown, quick virtual eradication of COVID-19 in China made it the only major economy to grow in 2020—notwithstanding only a modest economic policy stimulus compared with the United States, Europe, and Japan. 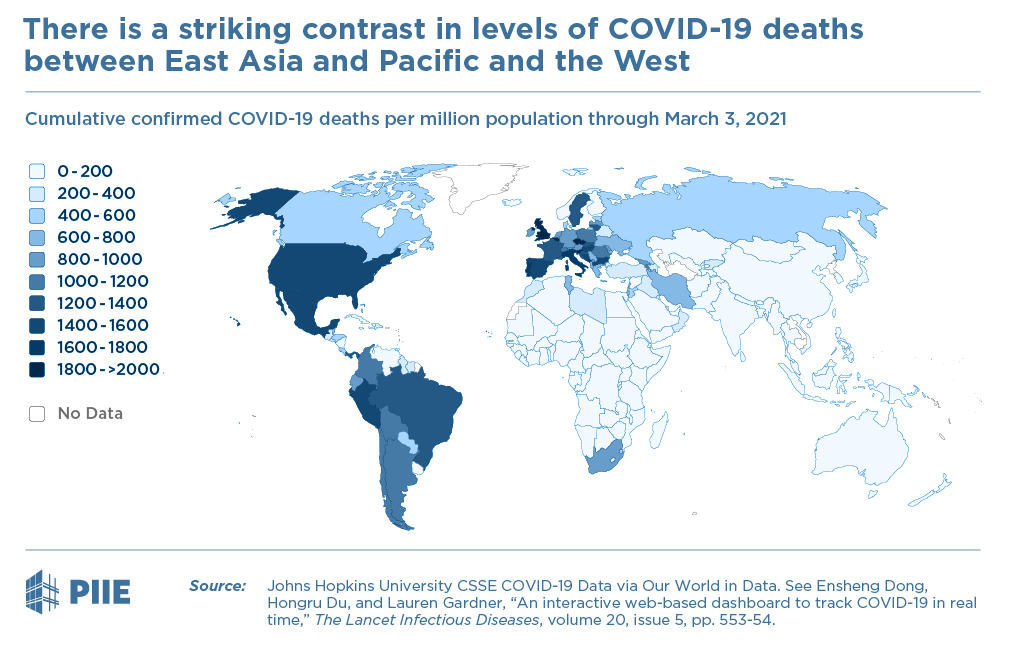 East Asia and Pacific’s success in keeping COVID-19 caseloads low for an extended period while maintaining or quickly restoring high economic activity levels suggests that the often-suggested dichotomy between pandemic control and maintaining economic health is a false one. Bloomberg News’ COVID Resilience Rankings evaluate success in handling the pandemic while minimizing the impact on business and society. An astounding ten of the top 15 countries and territories are in East Asia and Pacific. Top performers vary enormously in size, wealth, and political institutions, from small, wealthy, democratic islands like Taiwan and New Zealand to large, middle-income countries under one-party rule like mainland China and Vietnam. Core to their exemplary performance was the use of targeted and less costly mitigation measures that do not require an economic freeze. This strategy is worth emulating as the pandemic drags on and novel viral variants emerge.

Policy Response of East Asia and Pacific Is of Global Relevance

Our colleague Cullen S. Hendrix has found that some countries previously rated as prepared for a pandemic failed to live up to their billing: The United States was ranked at the top in preparedness before the pandemic by a Global Health Security Index; by contrast, Vietnam ranked 50th. The study showed that a strong predictor of an effective COVID-19 response was having recently faced an outbreak of similar infectious diseases, such as severe acute respiratory syndrome (SARS) and Middle Eastern respiratory syndrome (MERS), both of which had erupted previously in East Asia. This finding suggests that countries can learn from that experience and that factors like geography and culture, while far from negligible, may be less relevant. Most countries in the West were unready to handle COVID-19 despite earlier warnings from outbreaks of H1N1, Ebola, and Zika. That failure has devastated human lives and economic activity. But if Western countries now take to heart the lessons from COVID-19, as East Asia and Pacific did from SARS and MERS, they may be better prepared for future pandemics.

Most governments in East Asia and Pacific had already established extensive public health infrastructures for dealing with epidemics, drawing on their earlier brushes with those diseases. Learning from these experiences that demonstrated the seriousness of respiratory pandemics to all of society strengthened cultural norms toward adhering to public health measures like mask wearing, social distancing, and contact tracing. Arguments about deep-seated cultural differences between East and West making East Asia’s experience less applicable to the West oversimplify a more complex reality. China’s authoritarian government has the tools to coerce private behavior. But a survey by the global communications firm Edelman in 2020 showed that public trust in government dropped, in light of the Chinese government’s initial coverup and failures in containing the outbreak—particularly at the time of the death of whistleblowing doctor Li Wenliang. Yet the populace rallied to contain the virus once the government and society were clear about the threat the virus posed. South Korea, a robust democracy, is near the bottom of trust in government, yet its leaders managed to rally its populace through clear communication and demonstrated effective action, such as bringing Koreans abroad back home (to quarantine facilities first) and containing the first cluster of cases.

The immediate policy responses to the COVID-19 outbreaks were heterogenous across jurisdictions in East Asia and Pacific. While aggressive lockdowns were adopted in China, Australia, and Vietnam after the initial outbreaks, Taiwan and South Korea avoided the pain of a nationwide lockdown by relying more on preventative measures such as mass masking, social distancing, systematic quarantines, and border management. Despite these differences, the ways in which East Asia and Pacific maintained an extreme low case load over an extended period of time do have much in common—and are therefore of global relevance to combating recurrent pandemics, including those caused by novel variants of SARS-CoV-2.

The stringent public health measures adopted in East Asia and Pacific should not be blindly accepted in their entirety, however. Along with many citizens of these countries, we see some of the measures undertaken as excessively intrusive as well as unnecessary. While the tradeoff between controlling pandemics and economic health is illusory, public health measures at times trampled on personal liberties.

In China, for example, zealous local authorities welded shut some people’s doors, an unsafe and draconian way to enforce quarantines. Authorities’ measures, especially personal data surveillance for contact tracing purposes, appear excessive to many in the West, though even open, democratic societies like South Korea and Taiwan used them to great benefit. In China, South Korea, and Taiwan, after detecting cases of community transmission, the authorities published detailed movement logs along with an amount of personal information—including gender, age, and sometimes even occupation—that likely is more than necessary for the public to identify their possible exposure and has proven controversial in South Korea. Moreover, poor cybersecurity in government platforms has allowed leaks of individuals’ sensitive health data in China, leading to harassment.

Fortunately, there may be ways to gain most of the benefits of the approaches in East Asia and Pacific without giving much ground on civil liberties. For example, governments could stand ready to provide voluntary quarantine facilities for individuals who test positive or were exposed to the virus, where their health can be more effectively monitored. This option would especially reduce spread among low-income households in crowded housing, which suffered disproportionately from COVID-19 because they could not safely quarantine at home. Short of posting detailed data online, there may be quicker ways for contact tracers to unearth critical data needed to trace the path of an outbreak than manually compiling contacts through phone calls.

South Korea, for example, created special pandemic exceptions to its stringent privacy laws after its poor performance with MERS, which allowed authorities to quickly access data like mobile phone location, credit card transactions, use of public transport, and closed circuit television (CCTV) footage on confirmed cases. These data were not only useful to find close contacts and control the outbreak in South Korea. They also made it possible to complete exhaustively detailed studies like this one, which provided evidence with important global implications that COVID-19 could spread indoors with airborne transmission beyond 2 meters. These systems or similar exemptions can be designed now to be ready for future pandemics or new SARS-CoV-2 variants without necessarily enshrining a long-term expansion of government surveillance. Indeed, even some local governments in China have been forced to abandon plans to make the Health Code system permanent after citizens voiced concerns about privacy in online protests.

Every society needs to weigh tradeoffs between public health and personal liberties according to its values and capabilities. Nevertheless, the lessons from East Asia and Pacific are clear: More targeted data gathering can identify individuals reasonably suspected to be infectious and allow for the enforcement of strict quarantines on those individuals or travelers only. This approach offers a much more promising outcome than the alternative: Letting the epidemic rage out of control and then attempting to lock down entire populations under stay-at-home orders, as occurred in much of Europe and the United States.

Ultimately, the success of East Asia and Pacific in getting the COVID-19 pandemic under control was mainly a result of specific strong government programs, credibly sustained and enforced. These programs were maintained in the face of some popular opposition, both in democratic and authoritarian societies, using strong political will but eventually winning over the public with results. It must be noted that not everything in these programs, notably some of the largest violations of privacy, was necessary to carry this out successfully. At the same time, governments sticking to a policy program and enforcing it in an emergency until results appear is hardly the sole province of supposedly disciplined or docile societies—as the contentious democracies examined here, as well as Australia, Israel, and New Zealand, demonstrate. This combination of lessons is not an unattainable product of supposedly different cultures. That experience should be emulated to the extent possible and consistent with local values to lessen the devastating damage to health and economic prosperity from the recurrent pandemics the world is all but certain to experience in the years ahead.

Economic Policy for a Pandemic Age: How the World Must Prepare

For a fairer fight against pandemics, ensure universal internet access

How to accelerate vaccine innovations to counter future pandemics