A well-known limitation of Europe's banking union is the fact that most banks in the euro area will escape the direct supervision of the European Central Bank (ECB) and the Single Resolution Board that will address insolvent banks next year. Indeed, the ECB's recently published mapping identifies 3,652 banks in the euro area, of which only 120 groups are subject to its direct supervisory authority, though these 120 larger banking groups represent at least 80 percent of total euro area banking assets.

A closer look at the ECB's list shows that the smaller banks are concentrated in a limited number of countries, much more so than larger ones. Germany, Austria, and Italy together are home to almost four-fifths of all smaller banks, and Germany carries the lion's share. (1,697 out of the 3,532 smaller banks that the ECB calls "less significant supervised entities" are in Germany.) 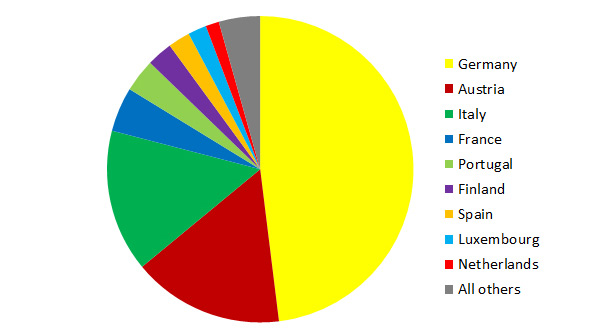 By contrast, in many other countries, local banks are consolidated into groups large enough to be subject to the ECB's direct supervisory authority. This is the case of most Spanish savings banks following recent consolidation (cajas de ahorros and cajas rurales); Finnish Osuuspankki cooperatives within the OP-Pohjola Group; French savings and cooperative banks (Crédit Mutuel, Caisses régionales du Crédit Agricole, and Banques populaires and Caisses d'épargne et de prévoyance within BPCE Group); and Dutch rural Raiffeisen-Boerenleenbank cooperatives within Rabobank. It is also the case of Austrian savings banks (Sparkassen), consolidated within Erste Group, and Volksbanken under Österreichische Volksbanken AG.

The ECB's criteria for distinguishing between groups it considers integrated (such as Rabobank or Erste) and those scattered across independent local entities (such as the German Sparkassen or Austrian Raiffeisen cooperatives) are based on legal form and ownership. Whether this distinction is meaningful for prudential purposes is not a trivial question, however. German savings banks rely on an elaborate system of mutual oversight and contingent guarantees, which suggests that they might be consolidated as one single entity for the purpose of systemic risk analysis. In other terms, the ECB's separation of euro area banks into "significant" and "less significant" relies on objective criteria, but the economic relevance of these criteria may be tested over time.

One additional twist is that, in several countries and systems, local banks pool functions such as asset management and wholesale market activity into separate entities that are typically large enough to be caught in the ECB's direct supervisory net. Specifically, Germany's Sparkassen rely on regional Landesbanken, which are all directly supervised by the ECB (except the tiny one in Saarland), and on DekaBank for asset management. German Volksbanken and Raiffeisenbanken similarly rely on DZ Bank and WGZ Bank, and so do Austrian Raiffeisenbanken on Raiffeisen Zentralbank. While the nature of these links does not lead to accounting consolidation, the corresponding financial interdependencies could be significant in at least some crisis scenarios—especially as the European Commission's recently strengthened assertiveness on state aid control could limit the availability of alternative support by municipalities or other territorial entities, as has often been observed in the past.

In contrast to small banks, the 120 larger banking groups subject to the ECB's direct supervisory authority are much more equally spread across all euro area member states: 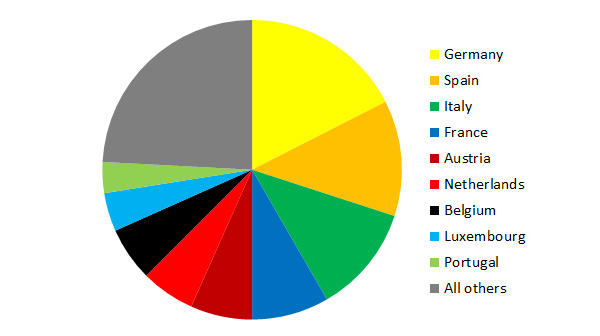 The much longer "tail" (the grey quadrant) in this chart is due to the legal minimum of three "significant" banks per member state, which leads to comparative overrepresentation of the smaller countries. Otherwise, and unlike the chart above on smaller banks, member states are represented broadly according to their economic weight—with a slight overrepresentation of Luxembourg, as a significant financial center, and of Spain, where recent consolidation of Cajas has led to a large number of medium-sized banks. France is slightly underrepresented in this count, because its banking sector is uniquely concentrated.

These observations have policy implications. The exemption of small banks from the ECB's direct supervisory authority was not in the European Commission's initial proposal for the Single Supervisory Mechanism Regulation (September 2012). The exemption was introduced during the negotiation within the Council, reportedly at Germany's vocal insistence. Its consequences on the structure of Europe's banking union are asymmetrical: The exempted banks (for which the ECB will be the ultimate license-granting authority but will delegate supervisory tasks to the relevant national authority) form a minor part of most participating countries' financial systems but loom large in Germany and to an extent also in Austria and Italy. It remains to be seen how this asymmetry may or may not lead to future political tension and/or regulatory arbitrage across European nations.

Why a Spanish Approach to the ESM Will Help

Why the Euro Doomsayers Are Wrong