To: The President of the European Central Bank

Background: This memo must start with a note of congratulation. While the European Central Bank (ECB) has not achieved its inflation target (and I shall come back to it below), it has stabilized financial markets and helped sustain economic activity in the euro area. This achievement was true during the financial and the euro crisis, and it has been true in the COVID-19 crisis as well.

In the process of doing so, the ECB has introduced many new programs and tools. Its balance sheet has increased by a factor of 9 since 2000, and by 40 percent since the start of the COVID-19 crisis (see figure). It is time to take stock, which is the purpose of this memo. 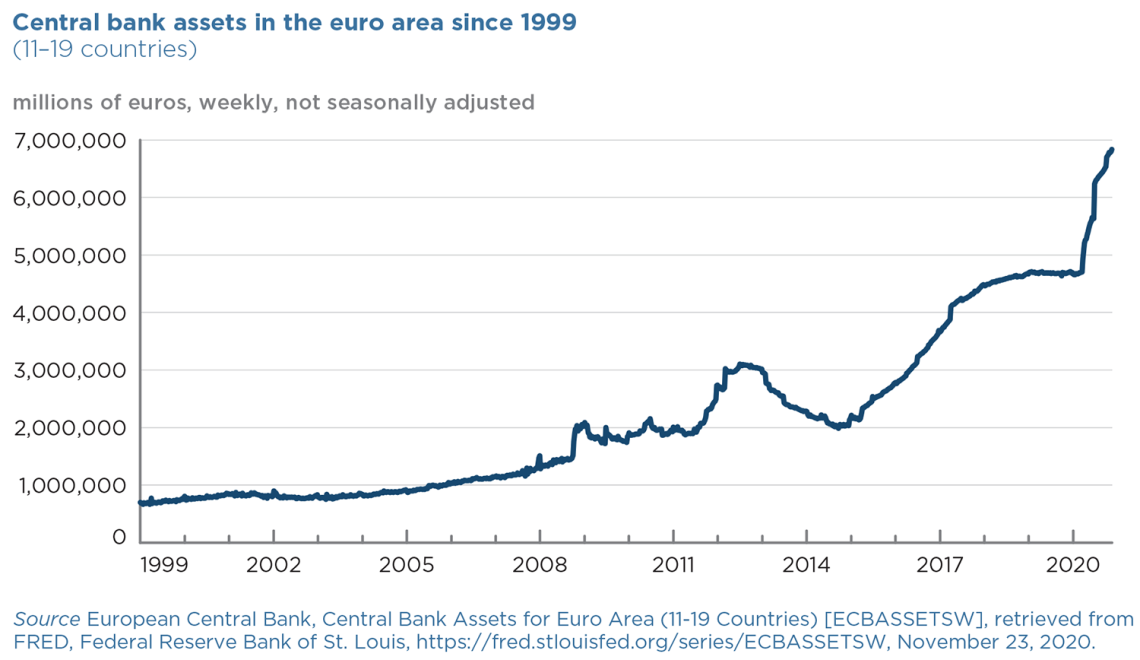 To do so, one must distinguish between three different economic environments.

Call the first “dislocation,” times when financial markets experience sudden outflows, when investors suddenly leave or enter markets, leading to large disruptions and large price movements. Europe experienced them as recently as the spring of 2020. At this point, it no longer does.

Call the second “secular stagnation,” i.e., times when r*, the neutral real safe rate, is so low that, in combination with low inflation, it limits the central bank’s ability to rely on the policy rate as the main tool of monetary policy. The ECB has been in this environment now for more than a decade.

Call the third “normal times,” or perhaps more accurately “olden times,” times when the neutral rate, and by implication the nominal rate, is sufficiently high on average that there are few constraints on moving the policy rate. According to both forecasts and market prices, this will not happen any time soon.

Take the first: The ECB did well in fighting dislocation. It negotiated swap lines with the US Federal Reserve, provided generous liquidity to both markets and institutions, and quickly got markets to stabilize. It is ready to do it if it happens again.

Take the third: For the time being, Europe does not have to worry about what to do in “normal times”: There will be time to rethink and possibly remove policy tools if and when normal times return.

This leaves monetary policy under secular stagnation, which I shall focus on in the rest of the memo.

Under secular stagnation, the central issue is the right monetary-fiscal mix. In “normal times,” the allocation is simple. Fiscal policy should focus on fiscal objectives and leave the macro stabilization mostly to monetary policy. Under secular stagnation, the answer is not so simple. Monetary policy cannot do the job alone, and this limitation has indeed been reflected in the ECB’s inability to achieve its target inflation for so long. Both fiscal and monetary policies are needed for macro stabilization, and the mix is a complex one.

Faced with a negative output gap, too little fiscal help forces the central bank to go beyond its comfort zone to sustain activity, forces it to decrease spreads perhaps too much, and in the process take on risks, not only financial but political as well. Too much fiscal help, on the other hand, can raise issues of debt sustainability, worry markets, increase spreads, and make the central bank’s job harder.

Fiscal and monetary policies must thus find the sweet spot, not an easy thing to do. I believe that in the COVID-19 crisis, the European national fiscal authorities and the ECB together have roughly found it. The risks to both the ECB and the national bank balance sheets have remained limited. And, given the low rates and the low spreads, debt sustainability risks have also remained very low. Let me, however, raise three issues, which I see as important:

The first involves semantics. “Market stabilization” and “improving the transmission mechanism” were good descriptions of what the ECB did in the dislocation phase. Preventing a self-fulfilling run on Italian bonds earlier in 2020 was clearly the right policy to follow. These terms are not, however, an honest description of what the ECB is doing today. With security holdings of close to three trillion euros, the ECB is doing more than stabilizing markets; it is decreasing spreads. Being honest about what the ECB is doing will improve the discussion.

The second deals with the division of labor between fiscal and monetary policies. Decreasing spreads is the right thing to do. If the policy rate cannot be decreased further, and activity remains weak and inflation too low, there are good second-best arguments for decreasing spreads beyond what the market would achieve, even if this leads to some distortions. The issue, however, is when it should stop being the job of the ECB and become the job of fiscal policy. The ECB’s liquidity programs are all carrots and no sticks. If a government started misbehaving, the ECB would be faced with very difficult decisions, and possibly with balance sheet problems. A lighter European Stability Mechanism/Outright Monetary Transactions (ESM/OMT) arrangement, with very limited conditionality but still the means to force an adjustment if it were needed, may be a better way to provide sovereign lending at lower rates and reduce the ECB exposure. Europe cannot move to such an arrangement today, as markets would likely react badly, but European authorities should think about whether such a transition should take place over time.

The third points to the need for major institutional changes in fiscal policy, a change in fiscal rules, a move toward more fiscal union, and the need for a fiscal partner for the ECB. These are not the ECB’s responsibility, but they are of the essence if the ECB is to do its job correctly. Achieving the right mix between monetary and fiscal policies in the current environment is difficult when 19 fiscal authorities are involved. Having one formal fiscal partner would help. EU fiscal rules have been suspended, and euro area governments have been willing to aggressively use fiscal policy, but rules cannot be suspended forever. They must be rewritten to consider the new realities. A bigger role for the ESM along the lines above requires movement toward more fiscal union. It is appropriate for the ECB to push explicitly for such reforms, indicating that if they do not take place, it might be forced to take excessive risks, which is in nobody’s interest.

Priority 2: Not the right time for higher inflation targeting

Let me turn to several other issues, which I view as less fundamental but are the subject of much attention and will be discussed in the ECB’s strategy review.

There is nearly universal agreement among economists that, in general, central banks should have a dual mandate, output gap stabilization and stable inflation. But the ECB’s single mandate may de facto not be so bad: Stabilizing inflation at target will in general deliver a decent output performance. Furthermore, the reality is that the ECB cares about both the output gap and inflation. If inflation were at 2 percent and, for some reason, the euro output gap remained large and negative, I am sure the ECB would maintain an expansionary stand. So, for the time being, given the difficulty of achieving a Treaty change, I would leave this issue aside and let sleeping dogs lie.

What about an increase in the target inflation rate? Relative to the debate and the many papers written before the financial crisis, what have we learned? On the one hand, we have learned that the probability of being at the zero lower bound was much higher than had been estimated; that the underlying reason was not just bad shocks, but a decrease in the neutral rate, r*, relative to the past. On the other hand, we have learned that a central bank can set somewhat negative interest rates, which relaxes the zero lower bound. The Phillips curve has become not only flatter but more so on the downside, decreasing the risk of a catastrophic deflationary spiral. And low inflation has made inflation less salient and inflation expectations stickier, a useful development for monetary policy.

So, while, in the abstract, the ECB would probably be in a better place with a higher inflation target, this is also not the time to push it. We should clearly move from the “below but close to 2 percent” to a straight “2 percent,” but not go further at this point. The credibility of the current target is already low, the credibility of a higher one would be even less so. As opposed to what the US Federal Reserve said, I would, however, leave the door open to revisiting the issue when inflation is back at 2 percent.

What about following the Fed and adopting average inflation targeting, or even considering a stronger version, price-level targeting? From an opportunistic viewpoint, given the context, this was a potentially good move on the part of the Fed as it could increase inflation expectations and decrease real rates (it turned out not to…which says something more general about the ability of monetary policy to manage expectations). The relevant issue, however, is whether it is a good rule in general. If it is symmetric, it will not be credible: No central bank will trigger a recession based on the argument that inflation is fine today but has been too high in the past. Thus, it must be asymmetric, perhaps along the lines of the proposal by former Fed chairman Ben Bernanke. If so, I believe it must be less fuzzy than the Fed has described. Fuzziness about length of time over which the average is computed, and what this means about the inflation rate the central bank will tolerate, will confuse investors and complicate policy. It will be more hindrance than help. If the central bank goes down that path, I believe that yield curve control, à la Bank of Japan, is a better way of sending the right signal. The ECB should explore it further.

I have not talked about how much monetary policy should be concerned with income distribution or global warming. It was intentional. In the ECB’s role as the financial market supervisor, considering global warming risks on the portfolio of financial institutions is obviously desirable. Going beyond this would be unwise, except when the choice of alternative monetary policy tools has clear implications for either income distribution or the nature of growth. Realistically, the ECB can have at most a marginal effect on these evolutions, and having too many targets will come at the cost of not fulfilling its primary mandate as best as it can.

High inflation is unlikely but not impossible in advanced economies

Europe must go big in its macroeconomic response to COVID-19

The Euro Area Is Not (Yet) Ready for Helicopter Money