The Spring of Latin America's Discontent

The violent demonstrations in Latin America in the spring of 2019 have prompted many theories about why so many protests have taken place spontaneously and at the same time. Some have asked: Was this a sudden eruption of hopes for a democratic revival? Unfortunately, the answer is a qualified no.

The discontent of recent weeks—perhaps years if we include the mass demonstrations in Brazil during 2013—has been spurred less by rising hopes than by what one might call the “postcommodity boom syndrome,” that is, the crushing of hopes for prosperity that had been engendered by the 2004–14 period of rising commodity prices, which had lulled the people of Latin America into a false sense of security about their economic future. The commodity bust has frustrated expectations, particularly among the less well-off, sparking rage at seemingly minor economic policy adjustments.

In Chile, for example, protests flared following a small change in transportation fares. In response, President Sebastián Piñera announced a state of emergency on national television alongside military officials. For a country with a history of bloodshed at the hands of the military, Piñera’s decision evoked a past that few would like to remember. His likened demonstrators to “vandals” and “thieves,” illustrating a leader out of touch with the sense of loss that led many to the streets and echoing the stance of other politicians across the region.

Protests have also broken out recently in Bolivia, Ecuador, and even in normally tranquil Uruguay—although there the demonstrations were largely against a constitutional reform that would militarize public security. Militarization is certainly a theme in Latin America these days, from Piñera´s televised address to the cabinet of President Jair Bolsonaro of Brazil, which is chock-full of former generals and other members of the Armed Forces. As political scientist Javier Corrales recently wrote for Americas Quarterly, the militarization of democracies is a symptom of weak political leadership. It also does not bode well for a region marred by military coups and dictatorships.

The figure below helps to explain why these protests have occurred. It shows the poverty gap in several Latin American countries at the beginning of the commodity boom (2004), near its end (2014), and recently (2018). The poverty gap measures the share of the population whose mean income falls below the poverty line (defined here as $5.50 per day). Hence, the poverty gap is a measure of the level of poverty in each country. 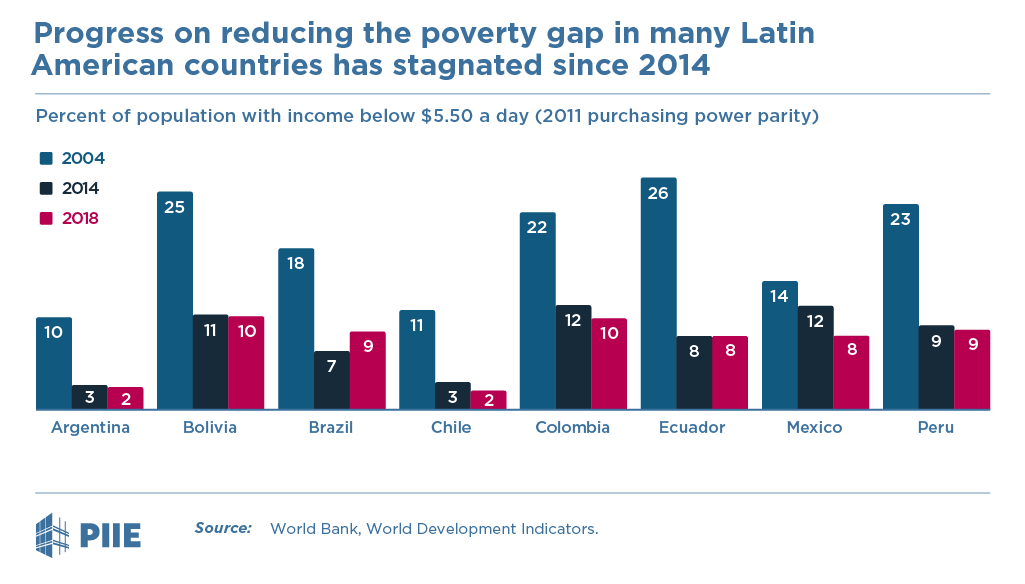 Between 2004 and 2014, the commodity boom—coupled with the adoption of policies to alleviate poverty in many Latin American countries—reduced poverty across the region by more than 60 percent on average. Since the commodity cycle ended, poverty levels have largely stagnated, except in Mexico. In Brazil, poverty levels have bounced back by more than 30 percent as a result of a major recession in 2015–16 aggravated by macroeconomic mismanagement and corruption scandals. These numbers underscore the frustrated expectations of those who believed that the gains seen during 2004–14 were permanent.

Social gains came hand in hand with greater political inclusion, which made the poor and the vulnerable middle classes feel more entitled to take on their countries’ leaders. Moreover, improvements in their livelihoods, however temporary, gave them hope for the future, but the lack of further economic progress has heightened the sense of unfairness, turning the optimism into rage against the political machine. Tensions thereby escalated into large-scale demonstrations provoked by economic measures that directly affected pocketbooks. Such was the case with the removal of fuel subsidies in Ecuador and now the rise in subway fares in Chile. Massive demonstrations also erupted in Brazil in 2013 following the announcement of a hike in bus fares. People took to the streets then to vent their frustrations not so much because of the increase in transportation costs but because growth was slowing and social progress had become less visible. Politicians failed to adequately address those frustrations. The result was political polarization, compounded by corruption scandals and economic mismanagement.

While the actors may be different and the initial trigger of mass demonstrations may not be the same everywhere, the underlying problem is the same across Latin America. Millions have been orphaned by the end of the commodity boom and, in some cases, by the governments’ failure to adopt social policies to address poverty and inequality. Governments should respond not by attacking the demonstrators but by adopting policies that address the growing discontent. If politicians continue to ignore the causes of the persistent turmoil, economic growth in Latin America will be the slowest in the world.

Hyperinflation in Venezuela: A Stabilization Handbook