Startups boom in the United States during COVID-19

Despite a health catastrophe and one of the worst economic downturns in modern history, startup business activity grew in the United States last year—business startups[1] grew from 3.5 million in 2019 to 4.4 million in 2020, a 24 percent increase. The number of new businesses also increased in Chile, Turkey, and the United Kingdom. Other economies were not so vibrant: New business formation declined by a quarter in Portugal and Russia. Startup activity in China barely budged, growing by 3 percent in the first three quarters of 2020 relative to 2019.

Economic crises are periods of “creative destruction,” where new ideas and ways of doing business come to the fore, a phenomenon famously described by the Austrian economist Joseph Schumpeter in the 1930s. No data are available yet to measure the number of businesses destroyed in 2020, because business data for firms that close without entering bankruptcy is lagging. Early evidence shows that by the end of 2020, around 9.1 million small businesses were temporarily or permanently closed,[2] and 9 million jobs were lost during the downturn. Nor is it easy to generalize about the new businesses starting up. But some of them reflected a shift to new technology-based ways to carry out the same business. Firms have been reborn after investing in digital applications. Workers have learned how to use remote databases and reach their customers over social media. The office was becoming virtual even before the pandemic and may remain so post-COVID-19 in some sectors of the economy.

There is a widespread perception that small businesses create the most jobs in the United States and other advanced economies. Research suggests that it is new businesses, not small ones, that create these jobs (Haltiwanger et al. 2013). Studying the patterns in startup activity is hence an indicator of future employment growth.

The focus of COVID-19 economic recovery efforts so far has been mostly on assisting businesses with weathering the crisis and on saving jobs. Governments have offered less to help new companies emerge. Still, several governments have established programs to aid new business formation during the pandemic. The scale of such a program in the United States is much larger than in other advanced economies. The US Small Business Administration provides Paycheck Protection Program (PPP) loans to small businesses, including eligible startups. The loans can be forgiven when certain conditions are met. By August 2020, 3.3 million PPP loans under $50,000 were approved.

Other advanced economies have developed more tailored programs. The United Kingdom, for example, created the Coronavirus Future Fund for startups, which gives out loans ranging from £125,000 to £5 million, subject to equal match funding from private investors. Between its launch in May and October 2020, the program approved a total of £800 million convertible loans to 745 companies. In Switzerland, a government scheme started in April 2020 has provided 360 loans for startups, with the full loan amount up to CHF 1 million ($1.1 million) guaranteed jointly by the federal government (65 percent) and the canton (35 percent). In Chile, the Startup Ciencia program has provided 90 new technology companies with equity financing for up to 85 percent of overall equity, with a ceiling of 220 million pesos ($300,000).

Early data from 16 advanced economies suggest a significant divergence in startup activity. The number of new business applications in the United States shot up by 23 percent in the first three quarters of 2020 relative to the same period in 2019, before the COVID-19 pandemic struck (figure 1). This is the largest increase of any country in the Organization for Economic Cooperation and Development (OECD) or the G20 with available data. Significant increases in entrepreneurship are also recorded in Turkey (23 percent), Chile (14 percent), and the United Kingdom (9 percent). Several other countries—China, Estonia, Switzerland, Australia, and the Netherlands—show modest increases in the number of startups. 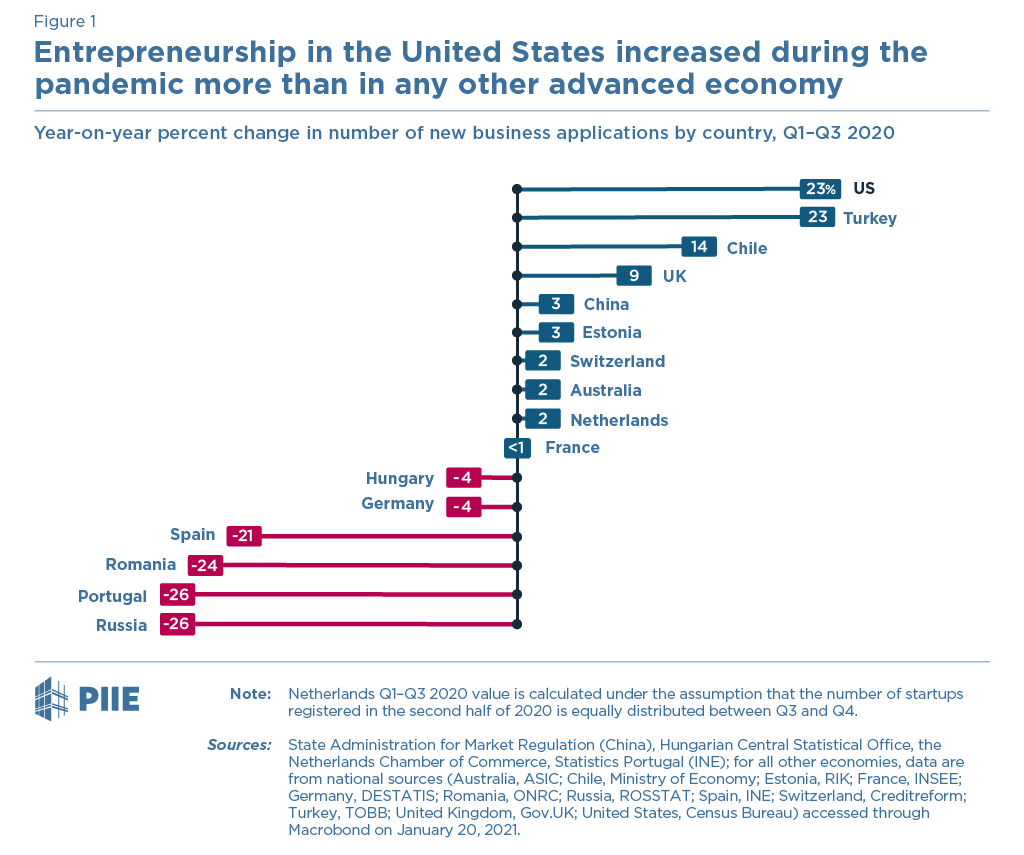 In contrast, the number of newly established companies has plummeted in Southern and Eastern Europe (figure 1). In the case of Romania, Portugal, and Russia, this decline is by a quarter relative to the previous year; in Spain, by a fifth.

The decline is 4 percent in Germany, though the situation is likely to change with the creation of the €10 billion “Future Fund” program for startups in 2021. KfW, Germany’s state development bank, will invest in German venture capital funds, a model arrangement designed to encourage private institutions like pension funds to invest more in startups as well. France has similarly pledged to raise €5 billion for startups by getting institutional investors to co-invest.

Three hypotheses have been suggested to explain the differential growth of new businesses in the early stages of economic recovery. The first is changing customer preferences during COVID-19 that create opportunity for entrepreneurs. In the United Kingdom for example, 20 percent of new businesses created in the third quarter of 2020 were in retail. The growth in new retail businesses could reflect the increase in online shopping during COVID-19, when internet sales as a share of all retail in the United Kingdom jumped from 19 percent prior to the pandemic to 33 percent in May 2020. Besides retail, industries that are adaptable to remote work, such as back-office services, also took a larger share of business formation in the United Kingdom in 2020 than before.

Second, new businesses emerge fastest in economies where the administrative procedures for starting a business are easiest (Djankov et al. 2002). Countries with a more expeditious process to start a business have been more likely to experience an uptick in business formation during the pandemic. Indeed, a simple correlation between the number of days required to complete the procedures needed to start a business and the change in business formation across the 16 economies in our sample provides suggestive evidence (figure 2). This correlation leads to a simple policy recommendation: simplify business entry procedures as a COVID-19 recovery measure. 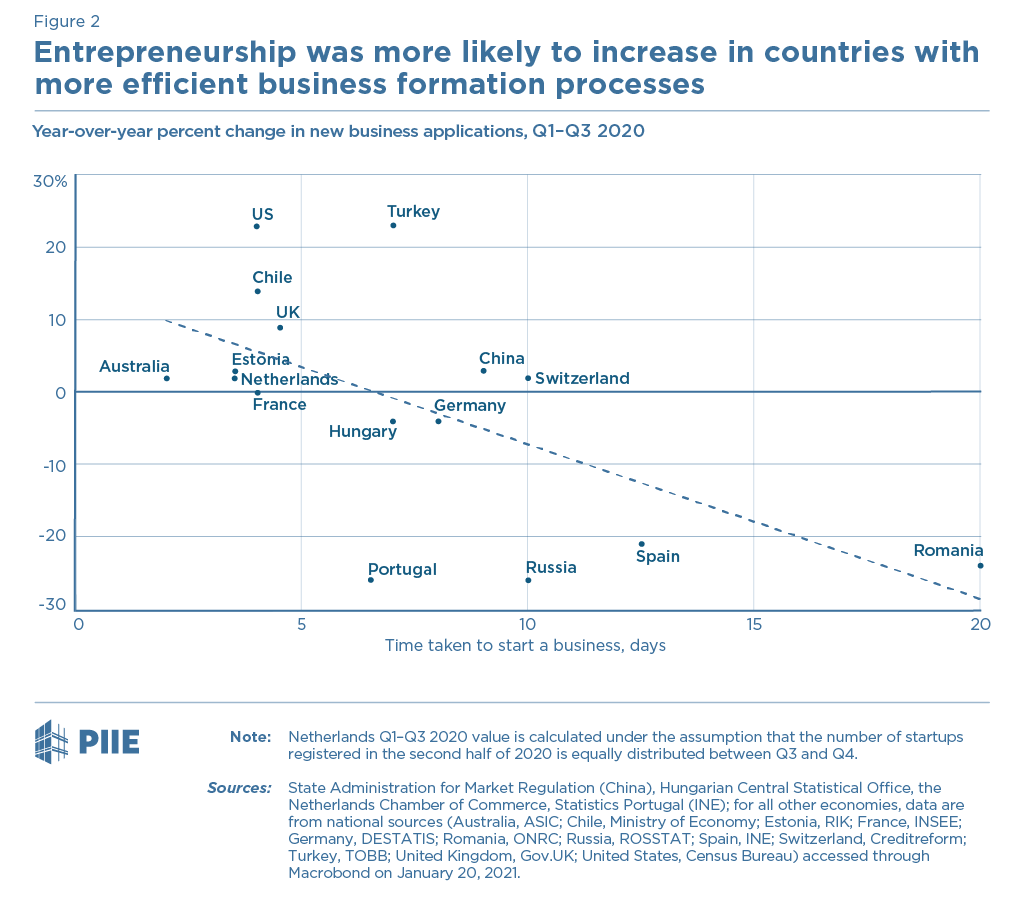 Unemployment may not be quite the right correlate during the pandemic, however, as the level of unemployment benefits and other subsidies also matters greatly. In France, for example, benefits have been very generous, and those workers who are on partial unemployment during COVID-19 can survive without trying to take up another activity.

When Schumpeter was contemplating creative destruction, he probably did not have in mind a global pandemic that puts a protracted stop on many economic activities. He also likely did not envisage the uncertainty over demand recovery that will remain in some sectors for years to come. Also, to be sure, while business formation grew last year, the recovery may be hampered by the millions of old businesses being destroyed, along with their role in value manufacturing and production value chains. The destruction of businesses in economic crises is also anything but new. Firm deaths spiked up in previous economic crises in the United States, with many workers losing their jobs (figure 3). 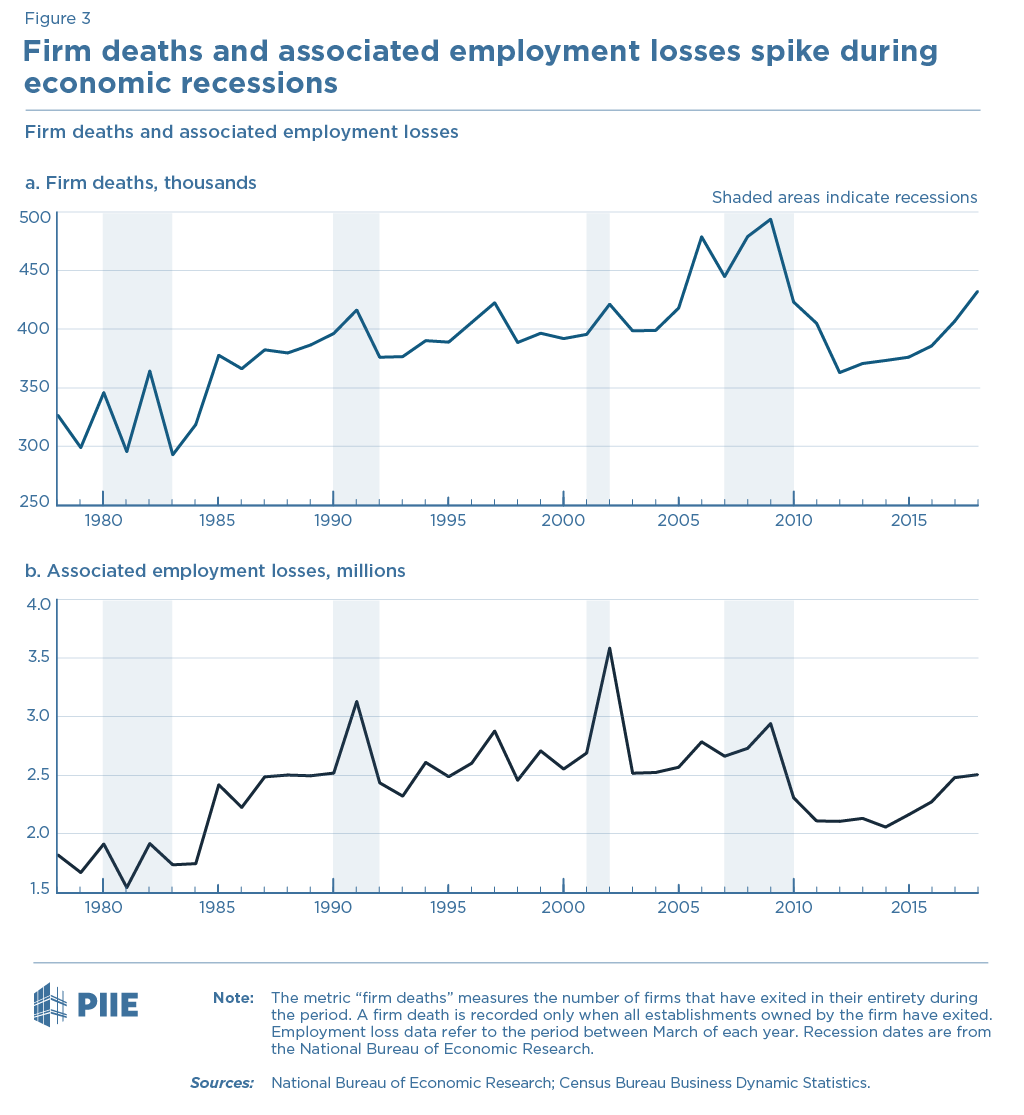 Tough times in doing business during a likely protracted COVID-19 recovery will dampen survival rates among startups. However, some of the entrepreneurship by necessity in the past is now absorbed by the gig economy (working for Lyft, DoorDash, and others). These jobs will remain after COVID-19 too, as vaccinations will increase demand for such services. And the changing nature of some sectors suggests that new firms may become market leaders quickly.

1. Startup data are constructed based on the number of business applications as reported to the US Census Bureau. The data cover Employer Identification Number (EIN) applications made in the United States. EINs are identification numbers used by business entities for tax purposes. https://www.census.gov/econ/bfs/about_the_data.html