There Is No Inflation Puzzle—Japan Edition

A previous post showed that current low inflation in the United States does not contradict a standard Phillips curve model adapted to accommodate downward wage and price rigidity. Some readers may wonder whether the Japanese experience also is consistent with such a Phillips curve. It is often argued that the Bank of Japan (BOJ) has pursued extraordinarily easy monetary policy since 2013 with little to show in the way of higher inflation. As in the United States, however, Japan is only now beginning to exceed potential employment, so the real test of the Phillips curve is yet to happen.

The upper panel of figure 1 displays consumer price inflation in Japan since 1983, excluding food, energy, and consumption taxes. Core inflation has fluctuated around zero since 1995. The lower panel of figure 1 displays the BOJ’s estimate of the gap between actual and potential output. This gap is based on flexible trends in the components of a production function for GDP as described in this research paper. Since 1995, the output gap has been negative more often than not, consistent with a prolonged period of subpar performance. Moreover, the construction of the output gap is based on the maintained assumption that output returns to potential every few years. It is more likely that output never exceeded potential between 1995 and 2016, as argued in a recent Brookings paper. 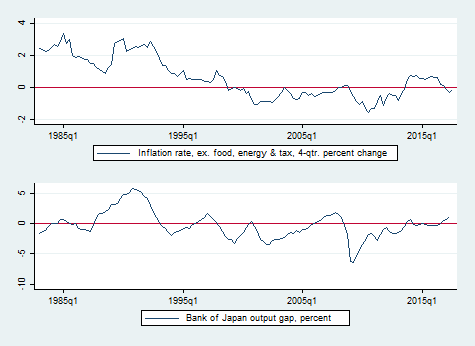 Note: Core inflation is the four-quarter percent change in the consumer price index excluding food and energy, adjusted for changes in the consumption tax. The consumption tax effect is assumed to be the average of the increase in inflation in the first quarter of a tax increase and the decrease in inflation in the fifth quarter after a tax increase. Taxes were increased in 1997Q2 and 2014Q2. The output gap is expressed as a percent of potential GDP.
Sources: Bank of Japan, Haver Analytics, and author’s calculations.

The true puzzle of inflation in Japan is the absence of accelerating deflation after 1995, when the economy was far below potential. As previously shown for the United States, this puzzle can be explained by the fact that workers and firms strongly resist outright declines in wages and prices. When overall inflation is close to zero, even large amounts of economic slack are not able to cause substantial deflation.

The implications of downward wage and price rigidity for the Phillips curve are displayed in figure 2. The vertical axes display the change in the Japanese inflation rate and the horizontal axes display the output gap as a percent of potential GDP.[1] The left panel focuses on the period before inflation fell to near zero and the right panel focuses on the period since 1995, during which core inflation has never exceeded 1.1 percent. The positive Phillips curve relationship shows through clearly in the left panel. If the output gap is overestimated because of the implicit assumption that it crossed zero several times since 1995, then a measured value of 2 percent may be closer to a true output gap of zero, as depicted by the dashed line. When the estimated output gap is above 2 percent, inflation tends to rise, and when the estimated output gap is below 2 percent, inflation falls. The right panel shows that the estimated output gap has been continuously below 2 percent during Japan’s extended period of ultra-low inflation. Downward wage and price rigidity weakens the Phillips curve relationship when inflation is very low. Other factors are more important for the ups and downs of inflation in the right panel, but note that the vast majority of these ups and downs are quite small—less than 1 percentage point.[2]

Figure 2 Japanese Phillips curves before and after transition to ultra-low inflation based on change in inflation and output gap, 1984Q1–2017Q3 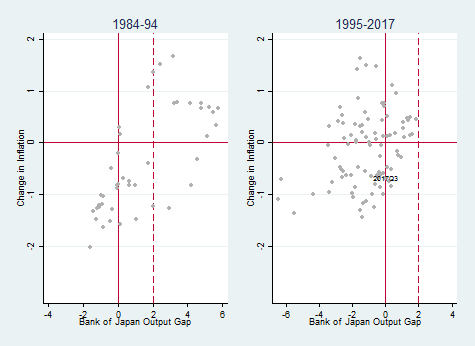 Note: Change in inflation is the four-quarter percent change in core consumer prices minus the average percent change over the previous three years. See note to figure 1 for definition of core inflation. The output gap is lagged by four quarters. The dashed line depicts a plausibly true output gap of zero.
Sources: Bank of Japan, Haver Analytics, and author’s calculations.

The drop in inflation in 2017 is not particularly large in historical context. Figure 2 displays the location of the latest observation (2017Q3 based on current inflation and the lagged output gap), which is well within the historical Phillips curve experience. In late 2016 and early 2017, the output gap increased noticeably to a value of 1.2 in 2017Q2 (the latest available observation). If the gap increases above 2 percent by the end of this year, we may expect to see a pickup in core inflation late next year.

Figures 3 and 4 display similar results for the growth rate of unit labor costs and the unemployment rate. Unit labor costs are considerably more volatile than core consumer prices, reflecting the fact that Japanese businesses do not lay off workers or reduce their hours nearly as much as their production changes. Nevertheless, figure 3 shows that growth of unit labor costs turned persistently negative after 1995.[3] This downturn appears to coincide with a sustained rise in the unemployment rate. There is no widely accepted and published estimate of the natural rate of unemployment in Japan. The dashed line in figure 3 is one simple estimate based on the BOJ view that output was near potential in 1985 and 2016. It is a straight line connecting a value of 2.5 percent in 1982Q1 and 3.0 percent in 2016Q3 and assumed constant at 3 percent in 2017.[4] 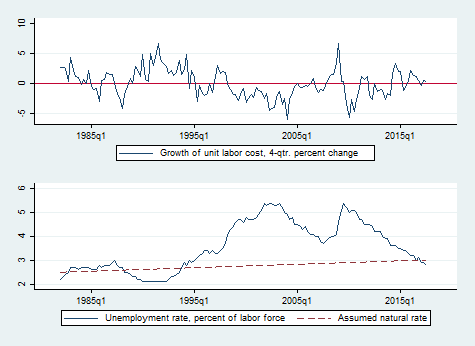 Note: Unit labor cost is total compensation of employees divided by real GDP. Natural rate of unemployment is assumed to rise steadily from 2.5 percent in 1982Q1 to 3 percent in 2016Q3 and remain constant thereafter.
Sources: Haver Analytics and author’s calculations.

Figure 4 displays Phillips curves based on the change in unit labor cost growth and the employment gap (dashed line minus solid line) in figure 3. Before the descent into ultra-low inflation (left panel) a standard Phillips curve is apparent. During the period of ultra-low inflation (right panel), employment has been continuously below potential and there is little effect from the size of gap on the change in unit labor costs. If unemployment stays low or falls further, we may expect some upward pressure on unit labor costs next year.

Figure 4 Japanese Phillips curves before and after transition to ultra-low inflation based on change in unit labor cost growth and employment gap, 1984Q4–2017Q3 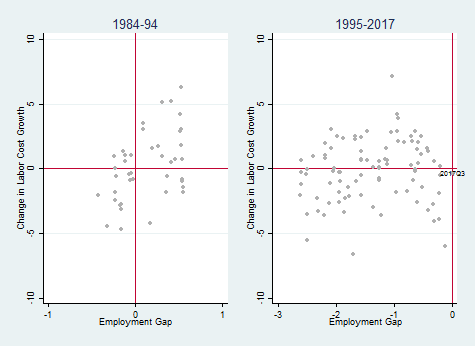 The data underlying this analysis are available here here. [zip]

1 The gap is four quarters earlier to allow for a lagged effect on inflation.

2 Some of these factors include the effects of exchange rate movements, indirect pass-through of commodity prices, and expectations about the BOJ’s future policies.

3 Hourly wage rates are not a useful measure of labor costs in Japan because of the importance of semiannual bonuses. Monthly earnings are also not useful because they do not control for changes in hours worked.

Overheating debate: Why not in Japan?

Japan's economic challenges mirror those of other advanced economies