The US economy contracted 3.5 percent on an annual basis in 2020, the largest contraction for any full year since the demobilization from World War II in 1946. The large decline in annual GDP reflects the very low amount of economic activity that took place in the second quarter. With the relatively rapid rebound in the second half of the year, the economy was down 2.5 percent from the fourth quarter of 2019 to the fourth quarter of 2020, among the worst four-quarter contractions in the postwar period but somewhat smaller than the worst period in the global financial crisis.

In contrast, disposable personal income (which subtracts taxes paid and adds government benefits received), experienced the fastest annual growth since 1984, fueled by supplements to unemployment insurance, stimulus checks, and support for small businesses. This, together with lower interest rates that resulted from extraordinary monetary support, fueled strong increases in spending on new homes, recreational goods, and vehicles—partially offsetting the large reduction in spending on services and business fixed investment in structures.

Overall, the contraction in the economy was considerably smaller than projected earlier in the year and is likely much smaller than experienced in most other large advanced economies. In part this reflects the benefits of the substantial US policy response and the resilience of the economy, but it also reflects the fact that the United States has taken fewer steps to curb the spread of the novel coronavirus.

The US economy ended 2020 about 5 percent below its trend level of output. US households ended 2020 with about $1.6 trillion of excess savings from the increase in disposable personal income and the reduction in overall consumption (equivalent to about 7 percent of GDP). If vaccines can get the virus under control, those resources plus the resources from the roughly $900 billion December legislation and any forthcoming legislation should provide substantial demand to support a strong economic recovery. The amount of demand, however, will depend on how quickly people return to their previous levels of services consumption and whether there is any pent-up demand that leads to additional consumption. An even bigger uncertainty about the economy is how quickly supply can rise to meet any increased demand, especially how quickly people who have lost their jobs can reconnect to new ones.

The following are eight charts illustrating some of the most important points from the GDP release. 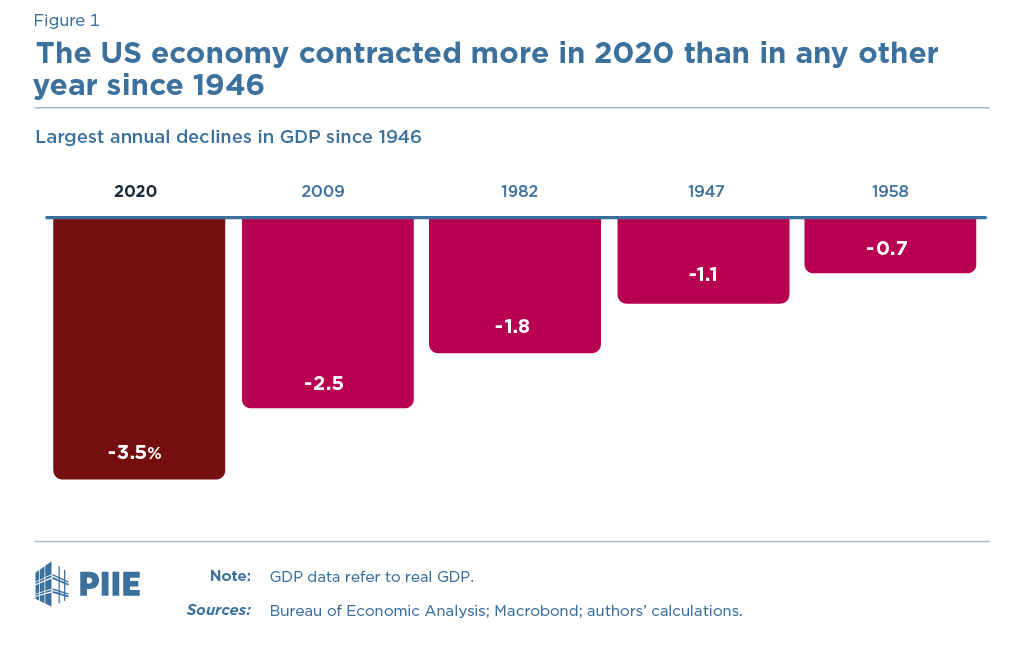 2. Among the largest four-quarter contractions in GDP since the demobilization from World War II. Measuring economic growth from Q4 to Q4 is the best way to understand what happened in the economy over the course of the year. In 2020, this meant a massive contraction in GDP in the second quarter followed by a substantial but incomplete rebound in the third and fourth quarters. 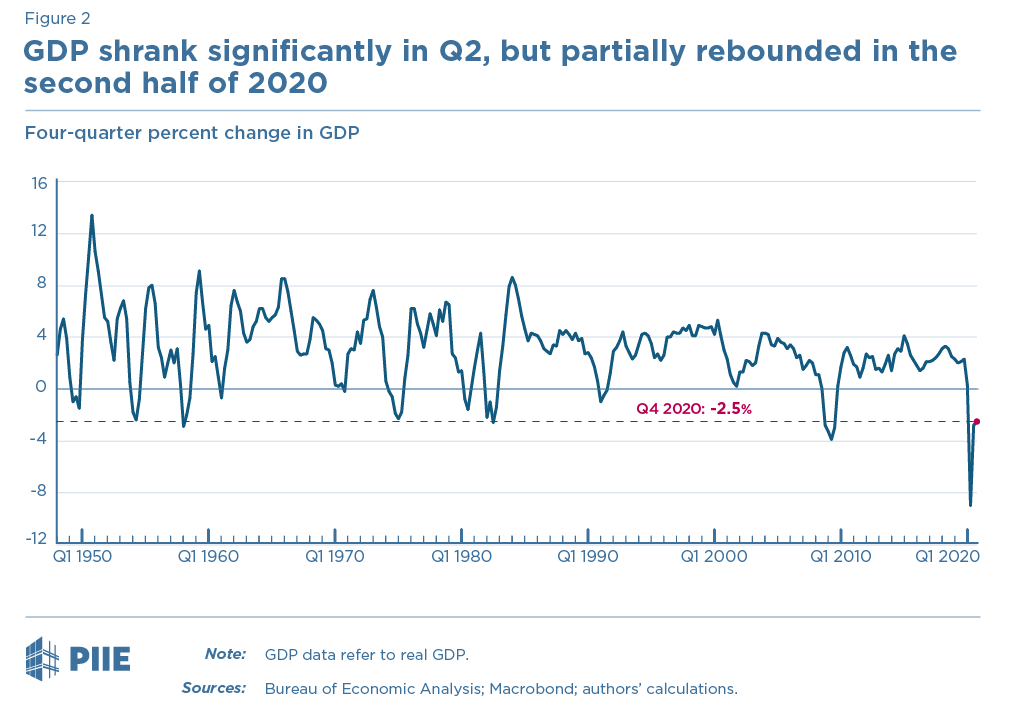 3. The contraction in GDP was not nearly as bad as most predictions earlier this year.
While the economic contraction in 2020 was among the largest on record, in the early part of the pandemic, forecasters expected the decline to be about twice as large. As the year progressed and the speed of the initial recovery and the effects of the policy response became apparent, forecasters became less pessimistic. 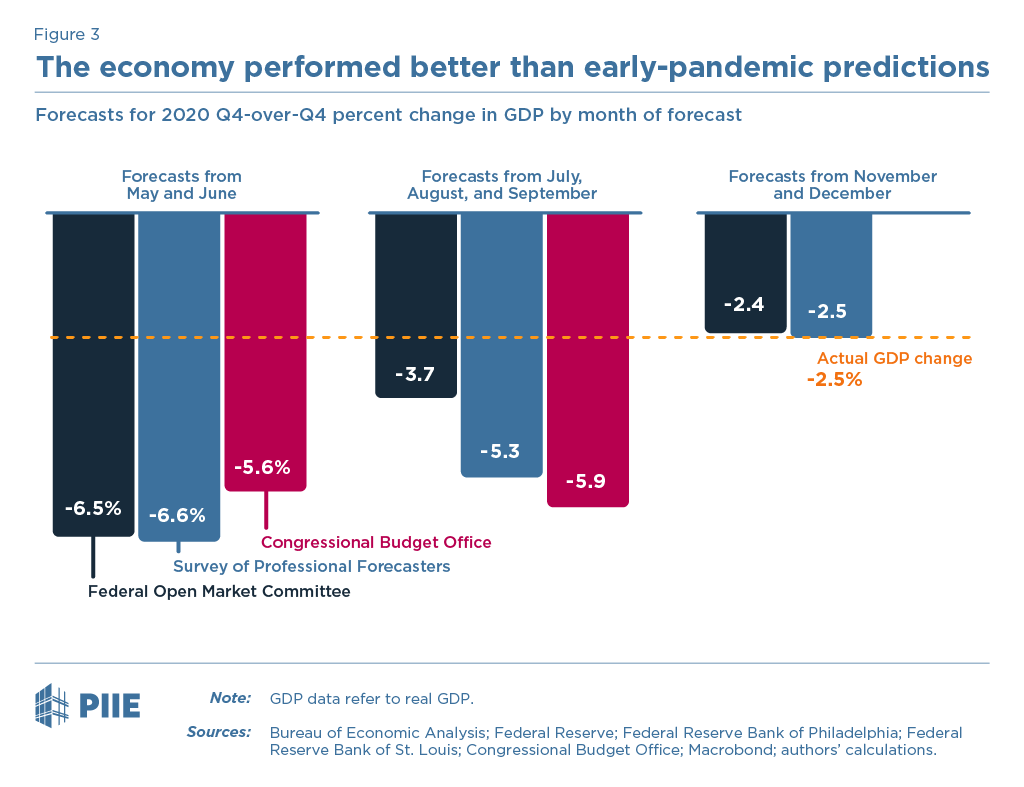 4. The contraction in GDP was likely less bad than for other advanced economies. Among the other major advanced economies, only Japan, where the pandemic has been much less deadly and which largely avoided the most stringent halts to economic activity, is expected to have a smaller contraction than the United States. 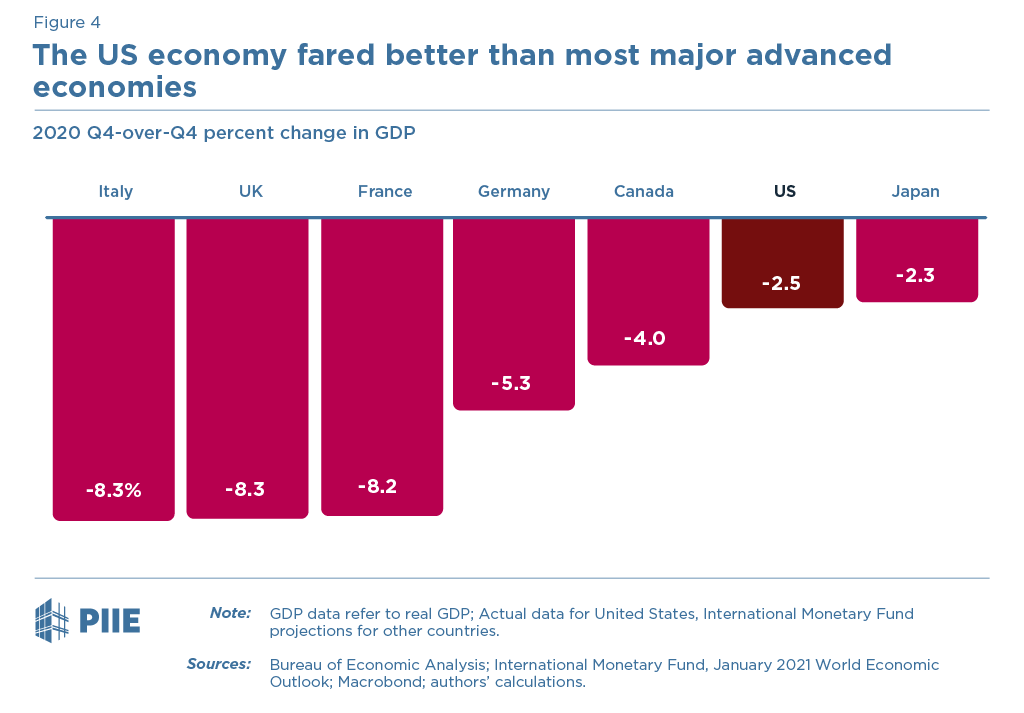 5. The largest increase in annual disposable personal income since 1984. Overall, real annual disposable personal income grew by 6.0 percent in 2020. This was entirely driven by increases in government benefits, without which income would have fallen 0.9 percent. While this is only a summary measure for the economy as a whole, a range of evidence suggests that lower-income households experienced, on average, even larger increases in disposable personal income than the average household. However, aggregate gains, even those concentrated among households at the lower end of the income distribution, mask the fact that many millions of households still fell through the cracks of government programs and faced considerable hardship over the course of the year. 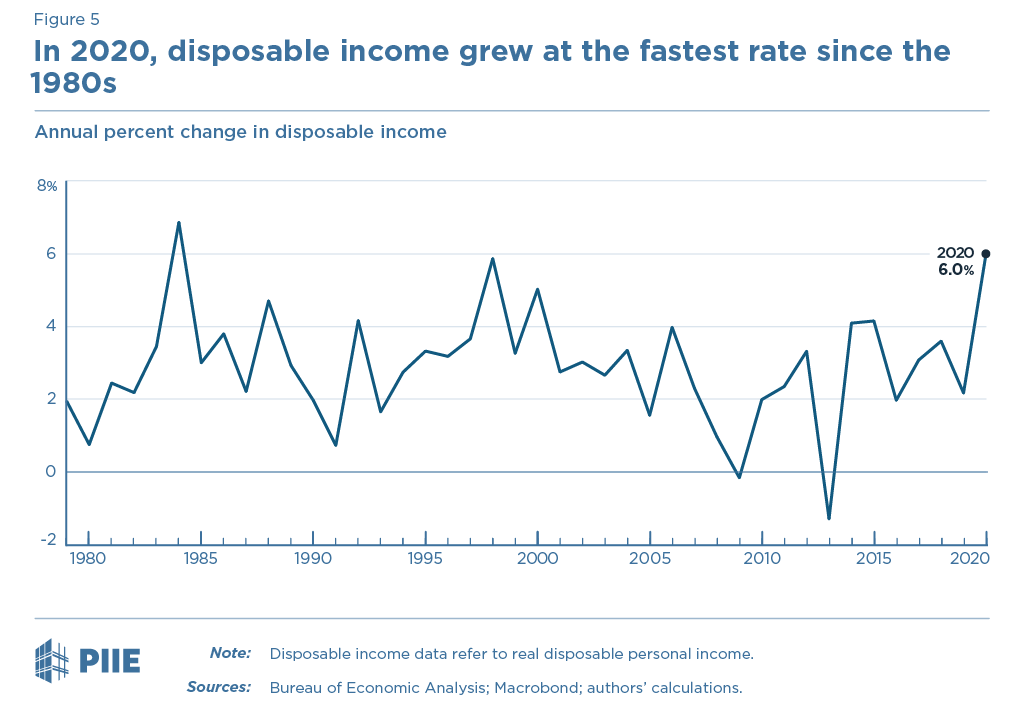 6. Consumption grew for durable goods and nondurable goods while falling sharply for services. The large increase in disposable income meant that many households could largely maintain their purchasing power, but pandemic-related closures affected what they were able to buy. Durable goods consumption grew 12 percent over the four quarters of 2020 as households were able to spend out of their incomes and borrow at low interest rates to fund bigger purchases. In contrast, services, which make up about two-thirds of consumption, fell over the course of the year as the virus prevented much face-to-face activity.

7. The 13.7 percent growth in residential housing in 2020 was a particularly strong part of the economy. The Federal Reserve’s combination of a near-zero federal funds rate and substantial purchases of mortgage bonds drove mortgage rates to their lowest on record, driving very strong growth in residential construction. 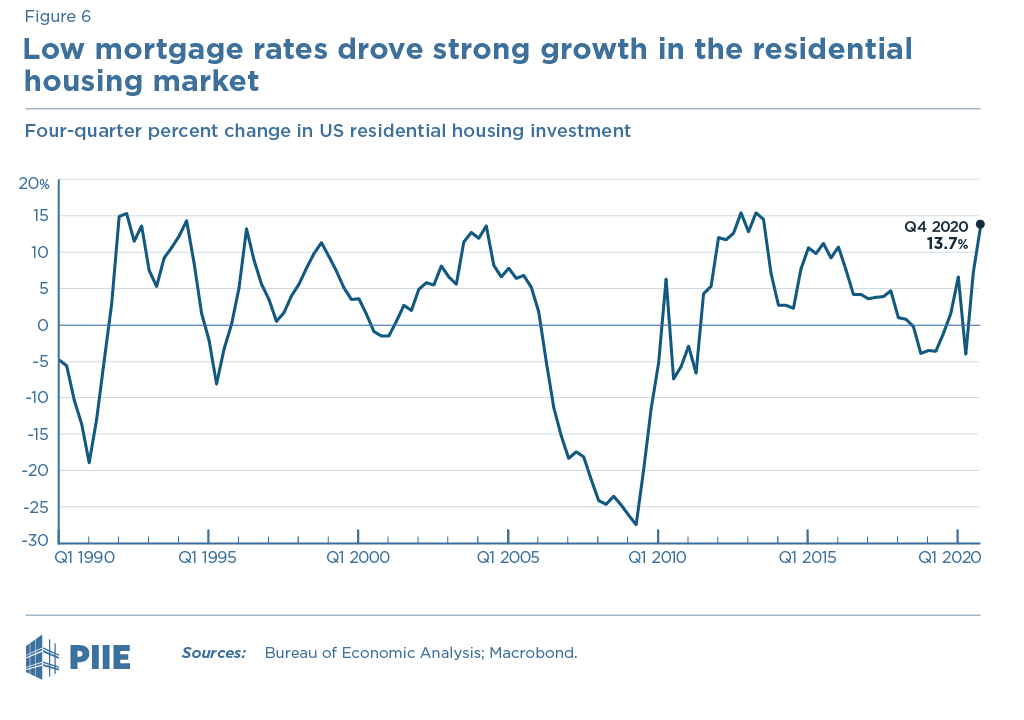 8. The US economy enters 2021 with $1.6 trillion of excess savings due to both higher incomes in 2020 and reduced consumption. For all of 2020, disposable personal income was $0.6 trillion above trend and consumption was $1.0 trillion below trend. As a result, the saving rate was 16 percent, well above the 7 percent average in recent years. This leaves households with an additional $1.6 trillion in additional savings. (Note these totals include only income flows, not the trillions of dollars of capital gains, which largely went to high-income households). 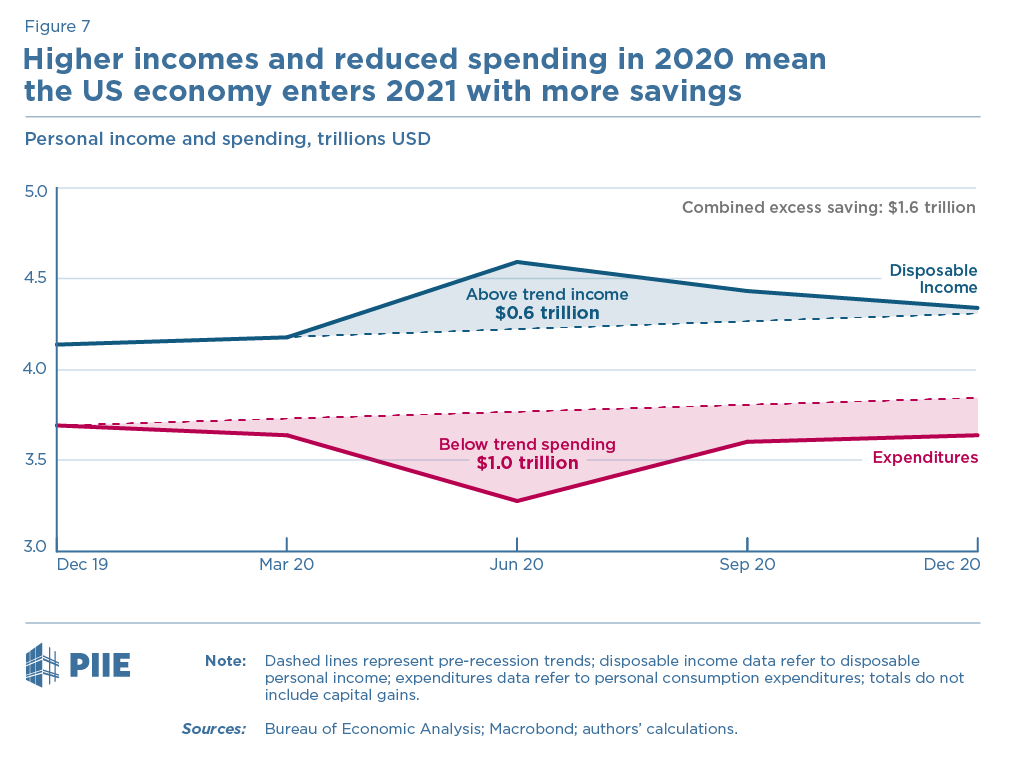 The pandemic led consumers to spend more on goods, less on services