EU lobster deal may be too little too late for Maine

The beleaguered lobster industry in Maine got scant relief this month when US trade negotiators reached a deal with the European Union that removes tariffs on US exports of lobsters to Europe. The deal follows fierce pressure on the Trump administration to rescue the lobster industry, once one of the state’s economic success stories, from the damage inflicted by President Donald Trump’s trade wars, European trade preferences for Canadian competitors, and the sharp downturn in world trade resulting from the COVID-19 pandemic.

The tariff deal is welcome action to be sure. But it is not close to enough to offset the extensive damage suffered by the US lobster industry, which has experienced a decline in overseas sales of 44 percent in the first half of this year compared to 2019.

The agreement provides Maine’s industry the same open access to Europe that Canada already enjoys and that has contributed to a sharp increase in Canadian lobster exports at Maine’s expense. US officials hope it will help recoup some of the European market lost to Canada by removing the 8 percent EU tariff charged to US shipments of live lobsters while Canadian products enter duty free. The deal levels the playing field for US-Canada competition for EU sales. But it does not guarantee those sales; it is hard to rebuild market share after an industry has lost ground to strong competitors.

The United States and Canada account for about two-thirds of EU lobster imports, which averaged $410 million annually in 2017–19. Since the EU–Canada Comprehensive Economic and Trade Agreement (CETA) entered into force on September 21, 2017, which phased out tariffs on Canadian shipments to Europe over several years, Canada’s share of EU lobster imports rose from 39 to 55 percent. During the same period, the value of annual US lobster shipments to the EU was cut in half to $52 million (figure 1). And in the first half of 2020, US exports to the now 27-member European Union fell even more sharply to $4.6 million. 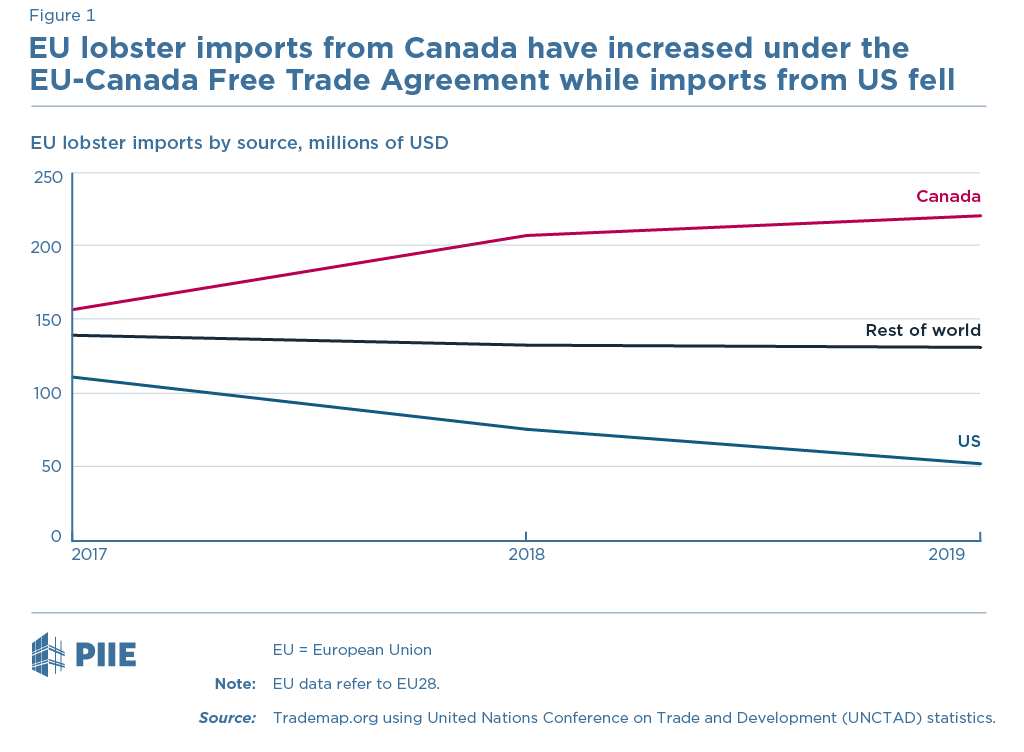 Trump’s trade war with China also has hurt Maine’s lobster industry. As part of its retaliation against US tariffs on Chinese goods, on July 6, 2018, China imposed a 25 percent penalty tariff on US lobsters on top of its 5 or 7 percent most-favored nation (MFN) tariff and then increased the penalty to 35 percent on September 1, 2019. And while it raised duties on US lobsters, China cut tariffs on lobster imports from Canada and other countries by 3 percentage points in July 2018, a move that made Canada’s lobster exports even more attractive to Chinese importers.

With the implementation of the phase one US-China trade deal on February 14, 2020, China committed to increasing US imports over two years. To make that happen, China reduced the US penalty levy to 30 percent. Even so, US exports of lobsters to China fell from $148 million in 2018 to $86 million in 2019 and sunk to only $26 million in the first half of 2020 (figure 2). Shipments have begun to recover slowly in the past few months but could be shut back down if the phase one deal goes off the rails. President Trump has repeatedly threatened to cancel the deal if China does not meet its commitment to increase US imports. 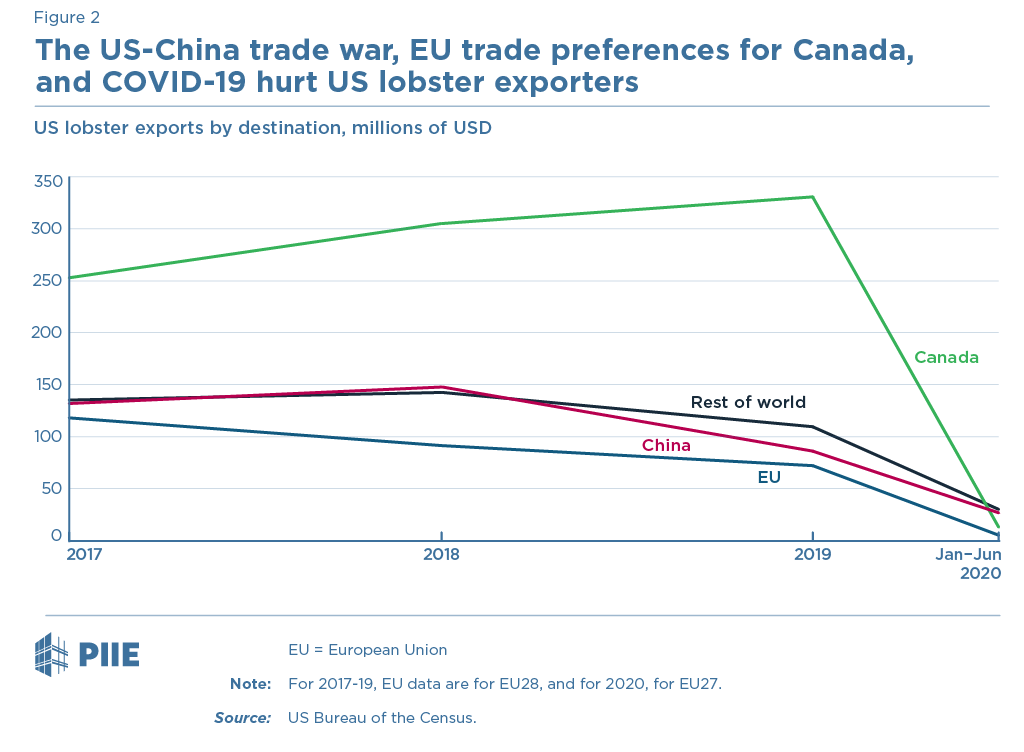 The pandemic has dealt an even bigger blow

But the biggest hit to Maine’s lobster industry may have come from the COVID-19 pandemic. Total US exports of lobsters were valued at $638 million, $687 million, and $598 million in 2017, 2018, and 2019, respectively. And in the second half of 2019 alone, shipments totaled $468 million despite Chinese tariffs and EU trade preferences for Canada. Interestingly, what seems to have sustained the industry despite the trade discrimination from China and the European Union was exports to…Canada!  Some news reports suggest Canada is importing raw lobster parts from the United States, only to process them and re-export them to China and other countries. Shipments rose steadily from $253 million in 2017 to $331 million in 2019 (when Canada accounted for 55 percent of total US lobster exports).

But the roof caved in on US exports generally in the first half of 2020 and on US lobster exports in particular. Global US lobster exports cratered to $73 million, and that modest level was sustained only by Chinese purchases that accounted for 36 percent of the total. Sales to Europe and Canada plummeted.

Lawmakers and business groups in Maine have focused on this hope: Surely, they have thought, the Trump administration would intercede to support hard-working American lobstermen and women, as it has done by doling out tens of billions of subsidies to hard-hit Midwest corn, wheat, and soybean farmers targeted by Chinese and other countries’ trade retaliation against Trump’s trade war tariffs.

But Maine’s lobster industry has not been eligible for US subsidies under the Market Facilitation Program of the US Department of Agriculture to compensate for retaliatory measures against US exports. That program has disbursed more than $24 billion to bail out Midwestern farmers. Those subsidies have been funded by diverting trade war tariff revenues collected on imports from China under obscure authority provided in section 5 of the Commodity Credit Corporation Charter Act. Though it was hit by foreign tariffs, the US lobster industry did not receive compensatory funding.

With a presidential election approaching, the Trump administration appears to be worried about votes in the farm belt and other export-reliant sectors of the economy. Accordingly, the administration recently has thrown a few crumbs of relief for the battered Maine lobster industry. As noted, China specifically included commitments to purchase US lobsters in the phase one trade deal reached in January. Then on June 24, President Trump issued a memo to agency heads instructing the Secretary of Agriculture to develop a plan within 60 days to provide assistance to the lobster industry and the US Trade Representative to ask the US International Trade Commission to assess the impact of the EU-Canada pact on the US lobster industry. So far, however, the lobster industry has pocketed only the mini-tariff deal.

The mini-tariff deal reached with the European Union last week provides a case study of what can go wrong with a confrontational approach to trade. US negotiators did not intend for their trade actions to hurt the lobster industry, but it made that industry a prime target for foreign retaliation and vulnerable to the drop in global demand from the pandemic.

The mini deal has also diverted precious negotiating energy that should have been focused on a full panoply of issues that have damaged US competitiveness in EU markets. The lobster industry gained tariff relief, but other US farmers and manufacturers got nothing. Lobsters are important to Maine, but even in 2017, its exports of lobsters to Europe were less than 0.04 percent of total US exports to the European Union.[1]

US-EU trade talks should have had a broader focus, but that approach would have looked too much like the Obama administration’s Transatlantic Trade and Investment Partnership talks, which the Trump administration has made clear it is intent on not pursuing. The Trump trade team’s efforts to escape from a lobster trap of their own making illustrates the larger trade trap they have created for themselves.

EU Trade Policy amid the China-US Clash: Caught in the Cross-Fire?