President Donald Trump’s 2018 tariff spree has resulted in 14.9 percent of US imports now being covered by some sort of special trade protection. Most of those affected imports were hit by Trump’s own actions. But some had already been subjected to tariffs imposed in previous administrations, with the Trump tariffs added on top. This fact complicates not only the challenge of measuring the impact of Trump’s actions so as to avoid double counting but also the implications for retaliation.

In 2018, Trump applied five sets of tariffs under a vast array of rarely used US trade laws, including claims that tariffs were needed to protect America’s national security. Many accounts have blurred the issue by counting the same tariffs twice. Furthermore, some of his tariffs have hit China exclusively, and some have hit China along with other countries. The tariffs also disproportionately targeted goods traded as part of global supply chains, making measurements of the impact even more difficult.

Getting the size and location of Trump’s new protection correct is important. Most of his tariffs do target imports not previously covered by special restrictions, and these are likely to significantly curtail trade. But hitting imports already covered by very high duties is different. It is less likely to do additional damage. Once imports of a product have been stopped by actions in previous years, it is hard for even President Trump’s new tariffs to stop them again.

Here are five new things you need to know from careful measurement of Trump’s 2018 tariffs.[1]

1. Trump’s five tariff actions by themselves covered 12.6 percent of US imports

Trump imposed five sets of tariffs in 2018.[2] Combined, they covered $303.7 billion, or 12.6 percent, of the total of goods that the United States imported in 2017. These are tariffs in addition to the normal tariff imposed on imports arising from trade agreement negotiations, such as the “most-favored nation” rates of duty collected at the US border.[3]

But there is some redundancy across Trump’s five sets of tariffs. His duties hit 12 different products more than once. For example, some semiconductors from China faced a new 30 percent tariff on February 7 and another new 25 percent tariff that Trump justified under a different trade law on August 23. Thus, while simply combining the five tariffs suggests $304.8 billion of trade was affected, hitting some products more than once implies that only $303.7 billion of US imports in 2017 was covered.

Distinguishing between hitting two different products with one tariff each and hitting one product with two tariffs can be important economically. Imposing another 25 percent tariff on Chinese semiconductors on August 23 may have little additional economic effect if the 30 percent tariff imposed on February 7 was already a costly enough penalty to stop them from entering the US market.

Figure 1 illustrates the trade coverage of Trump’s five different tariffs. The largest was the “unfair trade” action on China, which covered 10.4 percent of US imports. Next came the tariffs on steel (1.9 percent), aluminum (0.7 percent), solar panels (0.3 percent), and washing machines (0.1 percent). 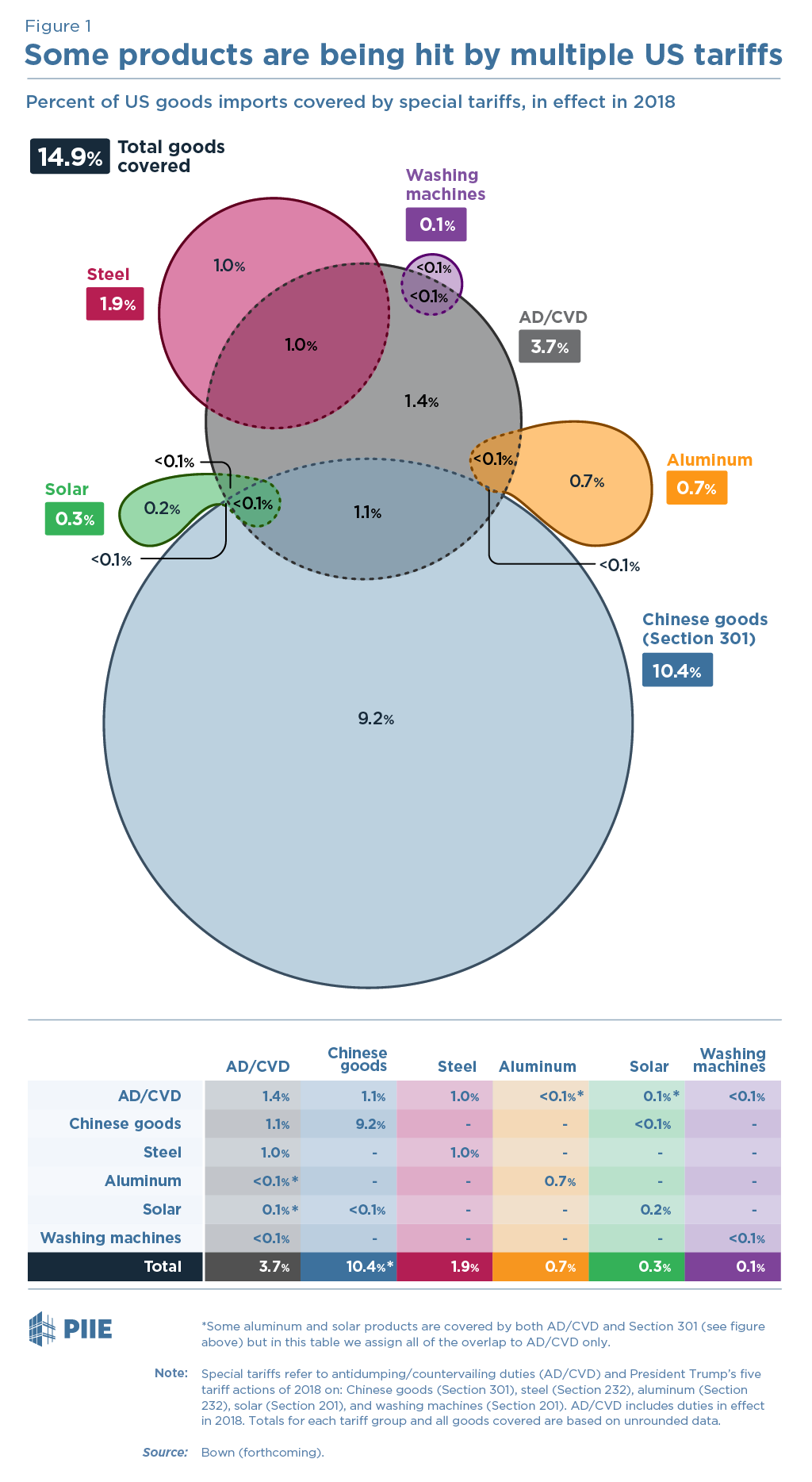 2. But some of those imports had been hit prior to 2018 by other special tariffs

The headline number for the value of imports covered by Trump’s five tariffs overstates the impact in at least one other way. Some of the products hit with new tariffs in 2018 were already subject to special tariffs, many imposed by prior administrations and at prohibitively high levels, arising under still different US trade laws.

Take Trump’s 2018 national security tariffs on steel imposed in March and June. Even before his tariffs, about half of US imports of steel products had already been subject to other special tariffs imposed under US antidumping and countervailing duty laws, which are designed to stop injurious imports caused by goods that are priced too low in the US market (dumping) or goods that benefit from foreign subsidies (countervailing duties). Trump’s 25 percent tariff on steel would be in addition to an average antidumping tariff of 66 percent on those products already in effect in 2018.

Steel is not alone. As figure 1 illustrates, antidumping and countervailing duties were already imposed on a number of specific products and countries covered by each of Trump’s tariffs on washing machines, solar panels, aluminum, and Chinese (Section 301) imports.

Estimates are that Trump’s five tariffs of 2018 hit “only” 11.2 percent of US imports that hadn’t already been affected by one of these other special tariffs of antidumping and countervailing duties.[4]

3. In total, all of these special tariffs now cover 14.9 percent of US imports

Getting the full picture of US special protection requires dealing with one other measurement issue. The flip side of the concern over double counting of antidumping and countervailing duties is that earlier use of those same laws had resulted in other, additional imported products being covered by US special tariffs that were not a part of one of Trump’s five actions. Furthermore, most of the antidumping and countervailing duties in effect in 2018 were not imposed by Trump but one of the six preceding administrations—some dating as far back as 1977.

The most important point? Adding up all forms of US special protection implies an estimated 14.9 percent of US imports are covered by tariffs of one form or another in 2018 (figure 1).

4. China, Canada, the European Union, South Korea, and Mexico are the biggest targets

Figure 2 illustrates the top exporting countries hit by this accumulation of US special tariffs.

Panel a) takes the 14.9 percent of US imports and allocates it across source countries. In the aggregate, most of the US special tariffs in effect in 2018 cover imports from China. This explains why, from a purely economic perspective, China has imposed the largest amount of tariff retaliation against US exporters.

These US special tariffs also disproportionately target imports of intermediate inputs. These inputs are the parts and components that American companies and workers purchase to combine with other materials to turn into globally competitive goods and services. Access to foreign-made inputs can result in higher quality and lower cost products for sale to consumers in America and around the world. 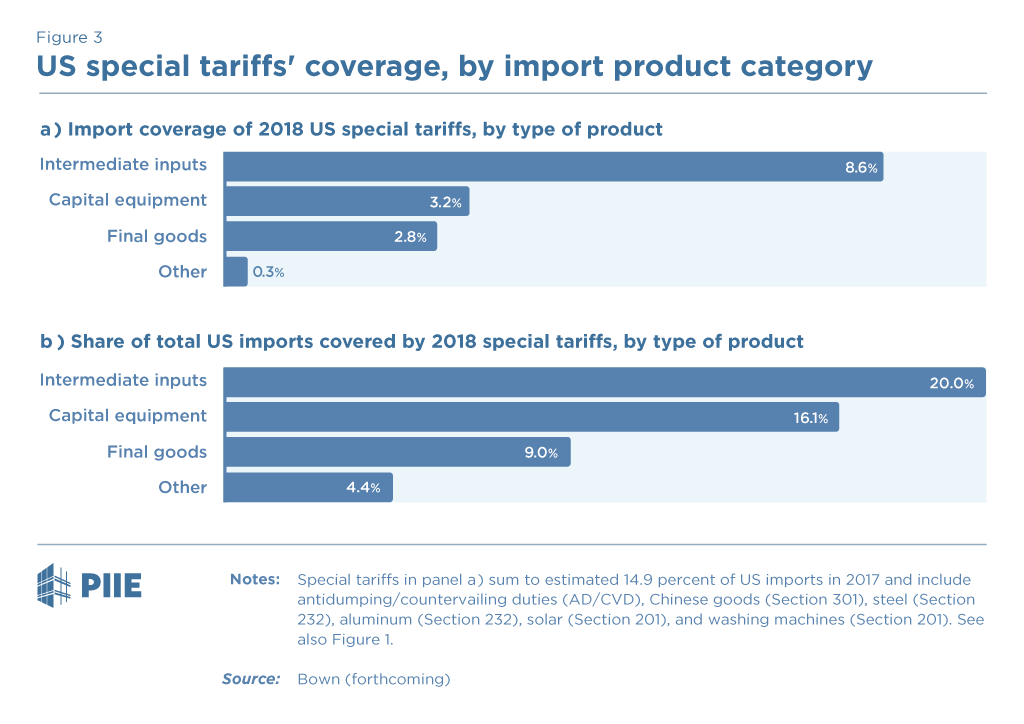 Over the last 20 years especially, countries around the world have lowered and kept low their tariffs on imported parts and components to help make their local economies competitive in the global marketplace. The Trump administration’s significant reversal of this approach makes American companies and workers less competitive relative to firms in other countries that do not face these higher costs for their inputs.

President Trump has applied an increasingly complex web of trade protection. Not only is the total import coverage massive but some imported products are being hit multiple times.

Consider the policy implications of one day removing Trump’s tariffs, however remote the current prospects. Unfortunately, applying multiple tariffs to the same product means that removing only one layer of tariffs may not actually revive trade flows.

Finally, there are increasingly bizarre scenarios involving trading partner retaliation. On February 8, 2019, for example, the World Trade Organization (WTO) authorized South Korea to retaliate against $85 million of American exports for US failure to remove tariffs imposed in 2012 on washing machines. But Trump put an additional layer of tariffs on those same washers in February 2018. Thus, South Korea may potentially retaliate because of US protection imposed in 2012, which may no longer have an economic effect because of other Trump tariffs on the same products.

1. These estimates are based on Chad P. Bown (forthcoming), US Special Protection in Historical Perspective: 1974-2018, working paper, Peterson Institute for International Economics.

3. The United States also has free trade agreements with 20 countries. With very few product exceptions, the normal US tariff applied to imports arising from these countries is zero. For all other countries making up the majority of US imports, the simple average applied US most-favored nation tariff on imports was 3.4 percent.

4. Note that making comparisons of acts of protection over time requires slightly more sophisticated measurement techniques than simply comparing actual levels of realized import—i.e., the method that generated the estimate of 12.6 percent. One important concern is that imports hit with special tariffs in earlier years that remain in place are expected to be low (even zero) in subsequent years because of those tariffs. Utilizing a technique designed to address this concern implies that an estimated 13.6 percent of US imports were hit with new Trump tariffs in 2018, as opposed to 12.6 percent of realized 2017 imports. Of that 13.6 percent, 2.3 percentage points were already covered by other special tariffs of antidumping and countervailing duties. Thus, Trump’s 2018 tariffs hit “only” 11.2 percent of US imports that hadn’t already been affected by one of these other types of special tariffs.

5. As figure 1 illustrates, a handful of solar and aluminum tariffs have been hit with more than two types of special tariffs.

Trump's phase one trade deal with China and the US election