Donald Trump isn’t the only presidential candidate who wants to build a wall around the United States.

While his opponents may not want to erect physical barriers, it’s hard to find a candidate who has not resorted to bashing efforts to continue opening the US economy to international trade. Politicians on both sides of the aisle have blamed past trade deals, particularly the North American Free Trade Agreement (NAFTA), for the loss of high-paying manufacturing jobs that never returned to the United States.

Even Hillary Clinton has disavowed her husband’s policies, prompting her Democratic opponent Bernie Sanders to quip during a debate that he was glad to see the former secretary of state has “discovered religion” on the issue of trade. During her time in the Obama administration, Clinton championed the early negotiations of the Trans-Pacific Partnership Agreement, or TPP, which was signed by 12 member nations in February 2016 but still requires ratification by individual legislatures. She has since come out in opposition to TPP as a presidential candidate. Her loss of the Michigan primary vote was widely seen as an indictment of Clintonian trade policies that supposedly hurt the US auto sector.

Despite the rising antitrade sentiment among voters that politicians are pandering to, a long history of economic research on trade, as well as data on employment trends in the United States, cast doubt on many of the lofty claims surrounding the trade debate. That’s the case on both sides: Those who argue, as President Barack Obama has, that the TPP could be a major boon to job creation, are stretching the truth. Trade agreements, by their nature, are not job-creation programs. They create better jobs, notmore jobs.

At the same time, those who say the United States has lost millions of manufacturing jobs because of NAFTA lack evidence. A closer look at US manufacturing employment data over time shows that the decline in factory jobs preceded NAFTA and was not accelerated by it. 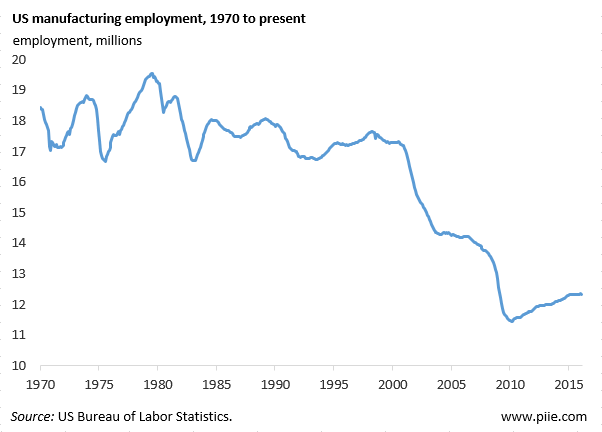 More significant, as the figure above suggests, was China’s explosive capture of world markets for manufactured goods, following its entry into the World Trade Organization in 2001. But the rapid growth of US imports from China between 2001 and 2007 simply accelerated a downward trend in US manufacturing employment already well established. As extensive research points out, including from the Peterson Institute for International Economics, trade deals create jobs that are higher paying than the ones lost. But the net effect on employment is small. Jobs gained are often in high-paying service sectors like computer software, finance, and consulting, as well as high-tech manufacturing like medical equipment and aerospace. Jobs are primarily lost in lower-paid industries like furniture and clothing.

In short, the net effect of trade on the level of employment is tough to gauge. It pales in comparison with other aspects of the economy—notably the lasting toll of the Great Recession of 2007–09 on US employment conditions and the widespread adoption of information and communications technology in every phase of the modern workplace. While trade deals have little net effect on employment, they boost the productivity of the US economy, and they lower the price of everything from jeans to autos.

To put the jobs issue in perspective, consider that the most severe estimate of job losses due to NAFTA, offered in a worst-case scenario from the AFL-CIO, pegs total job losses to Mexico at 682,900 positions. Contrast that to the damage from the Great Recession, which included a collapse in global trade rather than an increase and cost the US economy some 9 million jobs. Technological change is also having an impact. US factories that once employed thousands now barely need a couple of hundred workers to keep up with production.

Narrowing down the impact of a single agreement on job losses given all the other economic factors at play is a fool’s errand, as noted by the US International Trade Commission.

An April 2015 study from the independent Congressional Research Service found “NAFTA did not cause the huge job losses feared by the critics or the large economic gains predicted by supporters. The net overall effect of NAFTA on the US economy appears to have been relatively modest, primarily because trade with Canada and Mexico accounts for a small percentage of US GDP.”

In short, politicians looking to create jobs in the United States, in addition to remaining open to trade, should be debating a much wider set of policies—including business taxes, healthcare costs, education, even greater government support for dislocated workers—before dwelling so repetitively on commercial deals that have minor net effects on employment.

The real issue of TPP & other so-called trade deals is the loss of sovereignty of countries to corporations. Attacking the idea of free trade is probably easier for people to understand though.

Canada has been the sole loser in several investor protection lawsuits via Chapter 11 of NAFTA. Indeed, more than the money we’ve had to hand over, is the effect on politicians’ policies as they weigh whether or not we’d be sued.

TPP would increase the drain of our taxes to foreign corporations or prevent us from re-enacting rigorous environmental policies, and other policies for the good of the population.

TPP isn’t about trade, as you no doubt know, but about protecting U.S. corporations, in some cases fossilizing 20th Century business models. TPP is actually protectionist.

I’m with Trump (OMG!) on this. Rip these deals up & start over, talking trade.

Trump Can Push Congress on NAFTA, but Congress Can Push Back

The Politics of Job Polarization

Keystone Pipeline Lawsuit is not a Precedent for the TPP