The incoming European Commission led by Ursula von der Leyen faces a dilemma on the transatlantic trade relationship because of the unpredictable policies of the Trump administration. Should the Commission negotiate with the United States to de-escalate sanctions and defuse myriad issues and work through the World Trade Organization (WTO)? Or should the Europeans simply wait the administration out, knowing that making a significant deal is nearly impossible and hoping that President Donald Trump will no longer be in the White House after 2020?

Whether or not Trump follows through on his threats of more tariffs on Europe, the European Union cannot afford to just wait and see. It should test whether the administration can agree to some specific timely deals to minimize the risk of car tariffs; the conditions are not there, however, for a broader agreement. It should also try to settle the long-standing dispute over subsidies pitting Boeing against Airbus. Most important, Europe should bring together China and like-minded countries to uphold and reform the WTO. A united EU internal front is critical to deliver on these goals.

The Trump administration has repeatedly expressed unhappiness with Europe. In August 2019,  President Trump reiterated that “the European Union is worse than China, just smaller. It treats us horribly.” The July 2018 visit of European Commission President Jean-Claude Juncker to the White House brought the European Union some respite, but points of contention have only increased since.

The European Union is the world’s largest and most open trading bloc. In dealing with the United States, it is affected by Washington’s approach toward China and its attack on the WTO. But Europe is itself also a target of the disruptive US trade policy stance, and its bilateral trade deficit with the United States has not shrunk (see figure). The threat of national security tariffs on automobiles and automobile parts from the European Union hangs in the air, along with the possibility of more tit-for-tat tariffs over the long-running Airbus-Boeing dispute and French plans for a digital tax on technology companies. 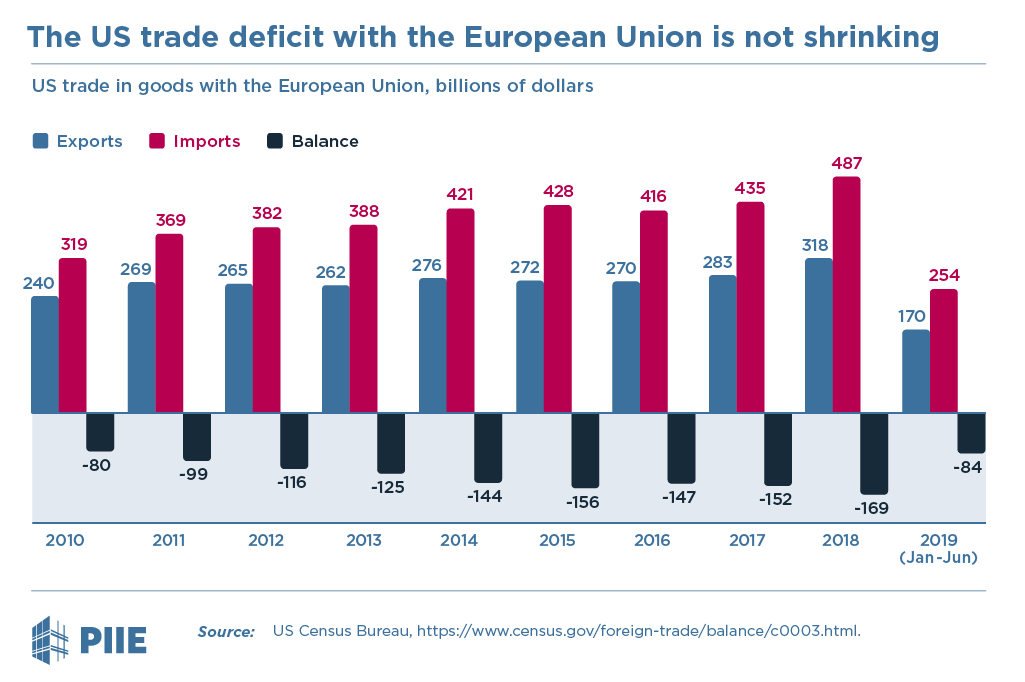 In recent months, Washington has made rapid progress on a limited deal with Tokyo, granting concessions on auto tariffs in return for Japan allowing market access for some US agricultural products (similar to what it has agreed to in the Comprehensive and Progressive Agreement for Trans-Pacific Partnership). A similar “agriculture for cars” deal with Europe would be hard to attain, since the United States and Europe are at odds on negotiating objectives. The new European Commission could revise the European stance. But French farmers are unlikely to cede on agriculture to save German carmakers, even if German car production draws heavily on imports of auto parts from all over Europe. Moreover, the European Union has stated it will not accept quotas or any form of managed trade in automobiles, making a “zone of possible agreement” uncertain at best.

The alternative to no agreement, however, is not good either. The European Union could face higher tariffs in its most important market for car exports, which could add up to $11,000 to the price of each EU car. Also, in addition to filing a WTO case against the United States, Brussels would likely retaliate with tariffs on imports of US products. The new European Commission announced it will strengthen its toolbox to use sanctions when other countries adopt illegal measures and simultaneously block the WTO dispute settlement process. While necessary from the perspective of power politics, “tariff rebalancing” would harm EU producers and consumers.

But some creative options to avert an escalation are not impossible. For example, a recent low-profile deal to improve US access to the EU beef market has created some goodwill. At the G-7 meeting in August 2019 in Biarritz, France offered a compromise on digital taxes in which it would repatriate revenue from the tax if there is a global deal on taxing technology companies.

Meanwhile, the 15-year-old dispute between Airbus and Boeing is coming to a head. The WTO has found both sides at fault for subsidizing their companies and authorized them to retaliate. Washington estimates damages caused to Boeing from EU subsidies at $11 billion while Brussels’ assessment of damages is $12 billion. Both sides have already produced lists of items to be potentially hit by tariff increases. Conditions are, therefore, ripe for a stand-down. Both the United States and the European Union have broken the rules, but a negotiated settlement to bring them into compliance with multilateral rules and a long overdue new framework to govern export financing in this sector would be the wiser course of action.

US and EU views diverge on multiple other topics, including the use of Huawei equipment in 5G networks, the impact of China’s Belt and Road Initiative, sanctions on Iran, and the strengthened extraterritorial application of US law on Cuba. Some escalation on these and other tensions may be unavoidable, but cooler heads should at least try to find alternative ways of managing differences in the next year.

The European Union has a special role in sustaining the multilateral trading system and preventing its potential demise. While the US approach has been less than constructive, the European Union is well placed to exercise leadership of middle-sized powers and developing countries to build a large coalition in support of the system. It may even be able to bring China around to play a constructive role in effective WTO reform. The immediate concern is focused on the Appellate Body crisis, which most likely cannot be sorted out without a greater commitment by emerging-market countries to the system and negotiation of new rules on subsidies, forced technology transfer, notifications, and others. Temporary solutions may be necessary, but ultimately, engagement with the United States is indispensable.

The European Union draws credibility from its long-standing principled commitment to the rules-based order, from established policy instruments such as its competition policy, and from its economic might. But it must further rally its citizens around the compatibility of an open trade policy and the fight against climate change and oppose economic-nationalistic agendas of some political leaders. The greater the divides between member states and with the EU institutions, the lesser the chances of the European Union forging effective policies toward the United States and China.

EU Trade Policy amid the China-US Clash: Caught in the Cross-Fire?

EU lobster deal may be too little too late for Maine

Will Auto Trade Be a Casualty of US-Japan Trade Talks?