US Oil Sanctions Policy Against Iran Is a Hard Sell

Under threat of new sanctions, US officials are pressuring Iran’s oil customers to cut off purchases by November 4. But since Trump announced the US withdrawal from the Iran nuclear pact in May, China and India—two of the biggest Iran oil importers—reportedly have increased their purchases of Iranian oil, a clear indication of how hard it will be to gain global cooperation in the drive to squeeze the Iranian economy.

Five years ago, the US-led coalition of countries sanctioning Iran reduced Iranian exports by more than 1 million barrels per day. But at that time, the European Union eliminated its purchases from Iran, which it is not willing to do today. And China and India imported less oil from Iran than they do now and only agreed to reduce purchases by a limited amount. Even matching the Obama-era cutback in Iranian sales will be an ambitious task for Trump’s sanctions diplomats.

According to data compiled by S&P Global Platts and by Bloomberg, which estimate Iran’s export volumes based on shipping data from Iranian ports, Iran’s oil exports are trending down overall as risk-averse customers react to the impending imposition of US sanctions after November 4. But Iran’s biggest customers are balking.

China and India accounted for 49 percent of Iran’s oil exports in the first half of 2018; in July, they increased their purchases substantially and took more than 60 percent of Iran’s crude exports (see figure). 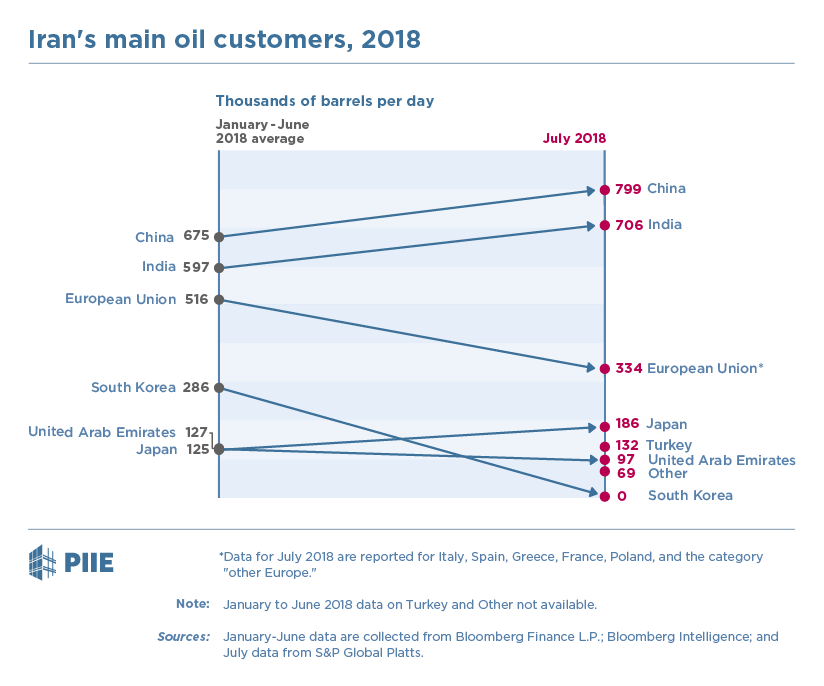 Chinese officials have said no to the US overtures and are using US threats to wrest pricing concessions from Iran. To help China avoid sanctions exposure, Iran is reportedly self-insuring cargoes and providing its own tankers to transport the oil. However, depending on the financial arrangements for these transactions, Sinopec, the China National Petroleum Corporation, and other Chinese firms still could be vulnerable to US financial reprisals.

India also has ramped up its oil purchases from Iran recently, though Indian officials seem amenable to negotiating a deal with the United States to cut back its purchases in return for a waiver of US sanctions and to foster goodwill for US-India defense cooperation. It is unclear, however, by how much. If India were to reduce its Iranian oil imports by 20 percent of its average import levels in the first half of 2018, the reduction would only cut imports by about 120,000 barrels per day—or almost the same amount that India increased purchases in July 2018! US officials will likely expect a lot more from Iran’s no. 2 customer.

European purchases from Iran are down overall. Total, France’s largest energy company, agreed to stop buying Iranian crude oil and investing in Iran’s energy sector (it remains, however, a partner of the China National Petroleum Corporation in the South Pars offshore gas field development in the Persian Gulf). But other companies continue to import Iranian oil into Italy, Spain, Greece, and elsewhere in Europe with estimated purchases of about 334,000 barrels per day—down from the more than 500,000 barrels per day in the first half of 2018, when European countries accounted for 20 percent of Iran’s oil sales. But those transactions still leave European firms and financial institutions vulnerable to US sanctions, if they are not granted a waiver.

Turkey also is resisting shutting off oil flowing from its pipeline with Iran. In July, Turkey reportedly bought about 130,000 barrels per day from Iran. But it’s bad timing for Turkish officials to seek a waiver from US sanctions; the Trump administration just doubled up its tariffs on Turkish steel exports to the United States and imposed sanctions on several senior officials—and is threatening to do more.

Besides some EU countries, US officials are getting support for their sanctions policy from Japan and South Korea. These Asian allies seem to be willing to comply with US demands to phase out most or all Iranian oil purchases by November 4. Together, they represented less than 20 percent of Iran’s exports in the first half of 2018.

In sum, US officials are far from the vaunted goal of cutting off Iran’s oil exports; they are still well short of commitments just to cut purchases in half. So far, counting cutbacks by the European Union, Japan, and South Korea, Iran may lose perhaps 600,000 barrels per day; adding India may boost the total cut to 700,000 to 800,000 barrels per day or about a third of the volume of its exports in the first half of 2018.

Are we likely to witness further cutbacks of purchases of Iranian oil? The countries that the United States needs to support it value the Iran nuclear pact that President Trump has trashed and worry as well that further pressure will provoke Iran to walk away from the pact. They are also the same countries that US officials have attacked or threatened with new tariffs impeding access to the US market. Will China pressure Iran when the United States threatens to impose high tariffs on half its shipments to the US market? Will Europe cooperate on Iran when the United States hits them with steel and possibly auto tariffs? Will India continue to postpone retaliation against US steel tariffs and substitute US and Saudi oil for Iranian crude? Will Turkey comply with US oil policy when it ignores US entreaties on the release of a jailed US pastor?

Achieving the US goal of drastically cutting Iranian oil exports will require some diplomatic acrobatics.

Steel Tariffs against Turkey Unlikely to Halt Its Attack on Kurds

Will Trump Throw Oil Sanctions on the Fire of US-China Relations?