Why did Trump end the WTO's Appellate Body? Tariffs.

From January 1, 1995 until December 10, 2019, the world trading system had a relatively reliable referee. If one government reckoned that another had broken the rules, then instead of lashing out immediately on its own, it could complain to the World Trade Organization (WTO). After a first round of independent arbiters judged on which side was in the right, WTO members could appeal to the Appellate Body, which would deliver the final verdict. But now, because of the Trump administration’s refusal to appoint new members, that Appellate Body is defunct. Without a referee, the danger is that trade disputes blow up into trade wars. Why, then, has the Trump administration done this?

One answer came on February 11, 2020, when the Office of the United States Trade Representative (USTR) published the Report on the Appellate Body of the World Trade Organization. Over 174 pages, the report accused the Appellate Body of engaging in ultra vires actions (acting beyond its powers) and obiter dicta (going on and on). It complained about these adjudicators taking away members’ rights and adding new obligations, in ways that American policymakers had never intended when they signed up to the WTO.

From this body of lawyerly Latin one could easily conclude that the Trump administration is engaged in a philosophical legal debate. Perhaps this is about a clash of legal systems, with the American contract-based approach to international law pitted against a European one, where interpretation—or, in American eyes, misinterpretation—is more acceptable.

Dig through the details, though, and it becomes clear that a key area of conflict is much less grandiose. In particular, one collection of judgments by the Appellate Body has caused special angst. In the section of the report titled “Appellate Body Errors in Interpreting WTO Agreements Raise Substantive Concerns and Undermine the WTO,” four of the five alleged errors concerned “trade remedies.”[1]

In other words, this is about tariffs. In a new essay, we explain why.[2]

Under WTO rules, members commit not to raise their tariffs above a certain level. But under exceptional circumstances, governments can break those limits to apply trade remedies. These include antidumping duties to defend against cheap imports; countervailing duties to protect against subsidized imports; and safeguard tariffs in response to import surges. By alleviating the pressure caused by injurious foreign competition, these defensive duties are supposed to preserve the political legitimacy of the system.

Under the WTO, America’s use of trade remedies came under fire

When negotiating the terms of the WTO, American trade negotiators fought hard to retain the right to use trade remedies. And immediately after joining the WTO, their import coverage increased (see figure). But then their import coverage fell, from a peak of 5.5 percent of total US goods imports in 1999 to a trough of 1.9 percent in 2013. 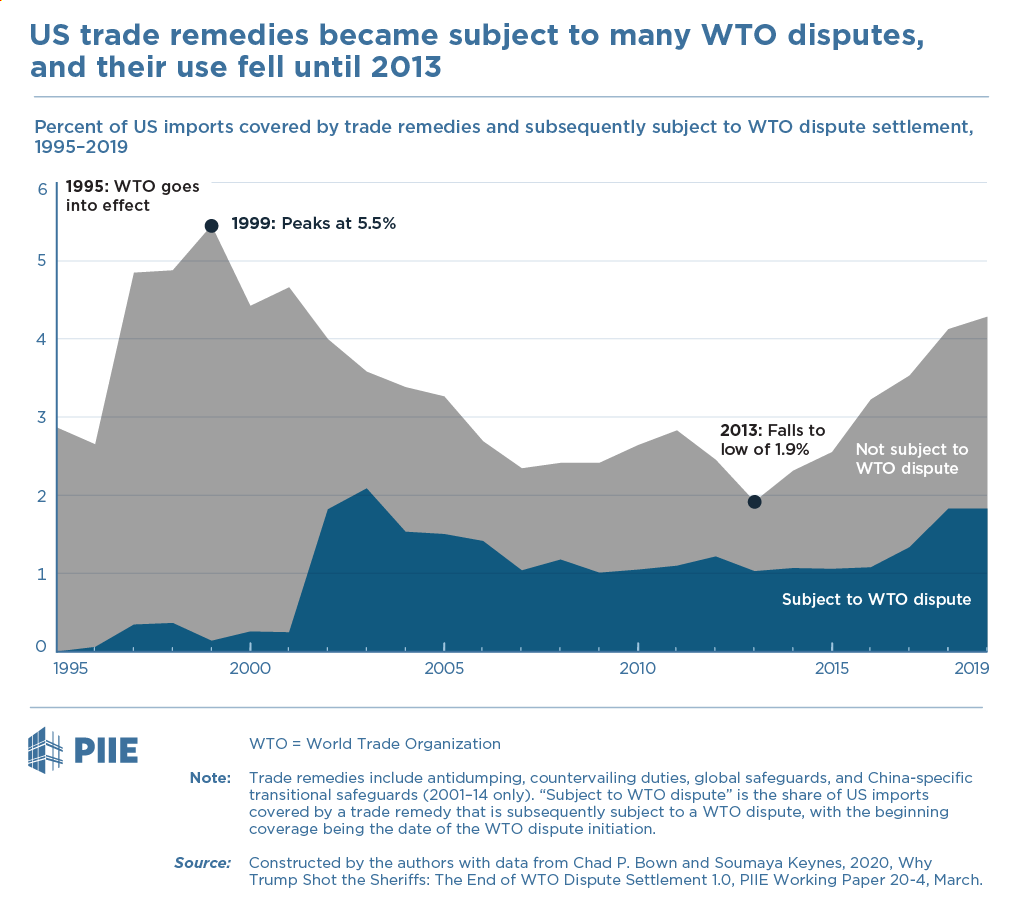 Pinning down exactly why this happened is all but impossible, as so many different things were happening at the same time. It is possible that this decline was the natural consequence of globalization. For example, as American companies built cross-border supply chains to take advantage of cheap inputs from other countries, their calls for tariffs should have quietened down.[3]

But one might also have expected to see the reverse. Over that period American producers were increasingly exposed to international competition, not only through tariff cuts agreed to as part of America’s WTO membership but also through the North American Free Trade Agreement with Mexico and the agreement to grant China permanent normal trade relations in 2000. The Great Recession, with its devastating impact on American manufacturing, should also have increased demands for protection.

Meanwhile, as demand for protection should have been on the up, the supply of tools to respond to such demands had fallen. Before the WTO, American negotiators had sometimes dealt with import competition by browbeating their trading partners into limiting their exports. At their peak in the late 1980s, such voluntary export restraints (VERs) affected 12 percent of US imports. But under the WTO, the United States agreed to relinquish this tool and use tariffs instead.

Implicit in the USTR’s report is the idea that this decline in trade remedy use was in fact the unnatural consequence of the WTO’s Appellate Body. Upon joining the institution, America’s use of trade remedies came under intense attack from other members. Nearly two-thirds of the disputes filed against it by other members were about trade remedies. Between 2002 and 2019, anywhere between a third and 60 percent of America’s trade remedies by import coverage were subject to a formal WTO dispute (see figure).

Time after time, the American government defended its behavior in front of the Appellate Body. And time after time, it lost. After losing, it would generally change its practices to comply with the Appellate Body’s judgments. But over time resentment built. To the likes of USTR Robert Lighthizer, these decisions from judges in Geneva were undermining the rights that American negotiators had fought so hard to protect and influencing American policymaking in ways that only Congress was supposed to.[4]

Of the five complaints about Appellate Body errors listed in the USTR’s report, two concerned antidumping, one was about countervailing duties, and the fourth was about safeguard tariffs.

The Trump administration’s solution is more controversial than its diagnosis

The Trump administration is not alone in finding fault with the WTO’s Appellate Body.[5] But its solution, of leaving too few arbiters for the dispute settlement system to work, has attracted criticism. For example, the Obama administration’s USTR, Michael Froman, has summarized the system of definitive rulings supported by the global trading community and not just one government as “an important advance over the last 20 plus years.”[6] The system’s defenders could point out that the United States has brought the most offensive disputes of any WTO member and has won an overwhelming number for the benefit of American companies and workers.

Some policymakers outside America may hope for a different American administration to sweep in, recognize the value of independent international arbiters, and restore the Appellate Body to its former glory. Other more pragmatically minded ones should get to work. First they must recognize the source of American discontent, which goes beyond procedural gripes.[7] And they must start working on a politically sustainable fix.

1. The fifth error involves “Technical Barriers to Trade,” or how the Appellate Body ruled on challenges to US regulations such as the country of origin labeling program for beef and pork products.

2. For more on the history of this issue, see Chad P. Bown and Soumaya Keynes, 2020, Why Trump Shot the Sheriffs: The End of WTO Dispute Settlement 1.0, PIIE Working Paper 20-4, March.

4. Before becoming the USTR, Lighthizer represented the steel industry as it requested tariff protection through trade remedies. In any given year between 1999 and 2019, between 20 and 70 percent (by import coverage) of America’s trade remedies subject to a formal WTO dispute were in the steel sector.

Why Trump shot the sheriffs: The end of WTO dispute settlement 1.0

Why Trump shot the sheriffs: The end of WTO dispute settlement 1.0

The WTO's Existential Crisis: How to Salvage Its Ability to Settle Trade Disputes