Correcting the Record on NAFTA

In a recent blog, Kevin P. Gallagher of Boston University takes the Peterson Institute to task for “overselling” the North American Free Trade Agreement (NAFTA) to the American public in 1993. To make this criticism, Gallagher lifts a phrase from our assessment published prior to NAFTA ratification: “US exports to Mexico will continue to outstrip Mexican exports to the United States.”1

Our job projections reflect a judgment that, with NAFTA, US exports to Mexico will continue to outstrip Mexican exports to the United States, leading to a trade surplus with Mexico of about $7 billion to $9 billion by 1995. How long can that scenario last? The answer fundamentally depends on investor confidence in Mexico, Mexican growth, and the ratio between Mexican external debt and Mexican GDP.

Gallagher conveniently ignored the last two sentences in this forecast. As we now know, investor confidence in Mexico collapsed at the end of 1994, owing to excessive dollar-denominated debt, resulting in a drastic devaluation of the peso. As a consequence, Mexican exports to the United States surged, leading to a bilateral merchandise trade deficit of $16 billion in 1995.

But the larger point is quite different. Unlike Gallagher and other critics, we never regarded the bilateral trade surplus or deficit as a decisive litmus test for NAFTA’s success. For us, the key test was two-way trade growth. In other words: Would NAFTA deliver faster trade growth with Mexico than might have otherwise occurred?

We projected that NAFTA would deliver a long-term increase in two-way US merchandise trade with Mexico of $30 billion, in each direction (measured in 1990 dollars), above the normal growth in world trade after 1990. Measured in 2005 dollars, this projection suggested that the long-term NAFTA payoff would have been $43 billion in additional trade in each direction within a decade. However, by 2005, US merchandise exports to Mexico were $53 billion more than what might have been expected from the growth of US exports to the world, and US merchandise imports were $55 billion more.3 The figure below shows the course of US-Mexico trade since 1990. Calculations explained elsewhere indicate that the NAFTA contribution to US two-way trade with Mexico added $26 billion annually to US GDP as of 2005 and more in successive years.4 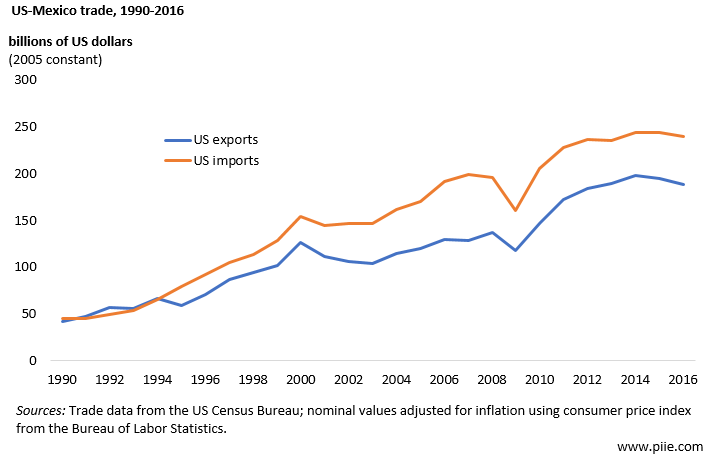 ​​​​​​Contrary to Gallagher and other critics, both imports and exports benefit the American public. The multiple payoff channels are summarized in chapter 2 of The United States and the World Economy (Peterson Institute for International Economics, 2005). As for imports, critics focus almost exclusively on their job displacement effects and ignore the benefits of lower prices, higher productivity, and greater variety. Far more jobs are displaced by technology than trade, and US imports from Mexico are around 13 percent of US imports from the world. Nevertheless, based on the records of the NAFTA Trade Adjustment Assistance (TAA) program, some 414,000 workers were displaced between 1994 and 2002.5 NAFTA displacement represented less than 2 percent of total job displacements during the same period, about 31 million workers—over 3 million a year. Despite predictions of NAFTA critics that the trade agreement would destroy jobs, the US economy grew significantly in the first decade of NAFTA with annual growth of 3.3 percent.6 That’s because trade agreements have little net effect on the level of national employment but do contribute to the overall “churn” in the job market. Existing government programs are totally inadequate to the hardships faced by displaced workers. The answer is not to denounce NAFTA and other trade agreements but to create the kind of adjustment programs that exist in other advanced countries.

Another criticism of NAFTA is wage depression. A study of national metropolitan labor markets by Autor, Dorn, and Hanson (2013) was unable to detect an impact on wages from US trade with Mexico and Central America.7 However, a subsequent study of local labor markets by Hakobyan and McLaren (2016) did find that about 1.3 million American workers experienced slower wage growth of 5 percent or more during the 1990s because of import competition from Mexico.8 These NAFTA-impacted workers represented about 1 percent of US workers in 2000. Their losses are real, but they are substantially outweighed by broad gains to the American economy.

Gallagher’s overarching complaint is that corporations essentially wrote the original NAFTA and silenced other constituents. His biggest fear is that corporations will dominate the NAFTA renegotiation. Gallagher’s misreading of history ignores President Clinton’s labor and environmental side agreements, and his crabbed forecast ignores President Trump’s populist leanings. The necessity of congressional approval will ensure that the new NAFTA, like the original NAFTA, reflects the preferences of the American public.

1. Gallagher also suggests that we claimed that Mexico would finally “export goods, not people.” While that is not a phrase we can find in our writings, it echoes Mexican President Carlos Salinas who famously framed NAFTA as a “choice between getting Mexican tomatoes or tomato pickers.”

4. For a detailed analysis of the successes and shortcomings of NAFTA, see Gary Clyde Hufbauer, Cathleen Cimino-Isaacs, and Tyler Moran, NAFTA at 20: Misleading Charges and Positive Achievements, Policy Brief 14-13, Peterson Institute for International Economics, May 2014.

8. Shushanik Hakobyan and John McLaren, “Looking for Local Labor Market Effects of NAFTA,” Review of Economics and Statistics, vol. 98, no. 4, October 2016. The figure of 1.3 million comes from a calculation supplied by professors McLaren and Hakobyan to the authors from their analysis.

Hufbauer and Schott selectively over react to my article.  My point is that NAFTA was over sold, it needs a new round of negotiation, and Trump will likely get it wrong unless we articulate what a better policy would be.

Hufbauer and Schott were a major part of the oversell.  Touting a trade surplus (sure, caveats and all) is but one example.  I did not attribute the 'exports goods, not people' quote to them (though they also touted that NAFTA would greatly benefit Mexico) but hyperlinked to Carlos Salinas, the shamed Mexican President that the US negotiated the treaty with.

Hufbauer and Schott know a lot about trade policy, and we agree on many particulars.  That said, both presidential candidates acknowledged that NAFTA needed an overhaul.  It is a pity that Hufbauer and Schott are putting themselves in the corner defending a flawed model whose advocates barely now support and whose opponents (somewhat wrongly) epitomize as the root of all ills.

We need to debate and devise a new trade policy that has the betterment of the world's people in a manner that is environmentally sustainable as the end goal--and then we need to make sure Trump doesn't steer it in the opposite direction.

Thanks, Geoff and Gary, for correcting  the record on the alleged oversale of NAFTA. I was in USTR and was deputy chief negotiator of NAFTA.  We in the US government were still more cautious,  basically claiming that exports would rise and that would support more jobs, but making no projections on trade surpluses.  We had good in-house economists who had educated us to the folly of measuring economic success or trade agreement success by trade deficits or surpluses.  I think those of us who did the original NAFTA are hoping the renegotiation can provide useful updates especially to those parts of the agreement that were particular to the economy of 1993, but trying to fix a trade deficit with NAFTA revisions is a fools errand that could do a lot of harm.

The USMCA, Newly Jeopardized, Was Never a Free Trade Agreement

For Mexico, Canada, and the United States, a Step Backwards on Trade and Investment