More than two and a half years have passed since China announced a number of changes to its foreign exchange regime in July 2005. During this period, the debate on the pros and cons of China's exchange rate policy, which had begun in earnest several years earlier, intensified. This important new book, based on an Institute conference in October 2007, takes stock of exchange rate policy in China and identifies the major policy options going forward. Specific proposals presented in the volume address how best to eliminate any misalignment of the renminbi; how best to reduce pressures emanating from the sterilization of large reserve accumulation; how best to make capital flows the ally—not the enemy—of exchange rate policy; and what institutional arrangements and policy guidelines to put in place to reap the greatest benefits from management of China's large foreign exchange reserves. Leading experts—including three from China—have contributed to the volume. The keynote address by Wu Xiaoling, deputy governor to the People's Bank of China at the time of the conference, is also presented in the book.

It is a superb collection featuring eight major papers, each one followed by thoughtful comments.

4. Estimates of the Equilibrium Exchange Rate of the Renminbi: Is There a Consensus and If Not, Why Not?
William R. Cline and John Williamson

6. The US Congress and the Chinese Renminbi
Gary Clyde Hufbauer and Claire Brunel

7. Influence of the Renminbi on Exchange Rate Policies of Other Asian Currencies
Takatoshi Ito 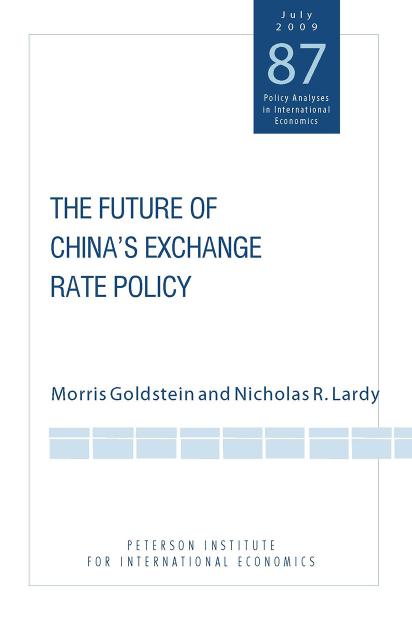