Is Trump right when he tweets that tariffs bring in government revenue? Here are 5 things you need to know.

President Trump has repeatedly praised tariffs as a “great revenue producer” for the U.S. government. According to him, “These massive payments go directly to the Treasury of the U.S.” — paid by foreigners when their goods enter the U.S. market.

In another tweet, Trump welcomed “Billions of Dollars” in tariffs on Chinese goods:

Billions of Dollars are pouring into the coffers of the U.S.A. because of the Tariffs being charged to China, and there is a long way to go. If companies don’t want to pay Tariffs, build in the U.S.A. Otherwise, lets just make our Country richer than ever before!

Like all governments, the U.S. government needs to raise revenue. And in doing so, it typically balances considerations of fairness against whether a particular tax imposes a lot of extra costs on society. Tariffs fall short on all these dimensions.

Here are five things you need to know about tariff revenue as federal tax revenue.

1. The United States gets 98 percent of government revenue from non-tariff sources.

Trump’s 2018 spree of additional duties on nearly $50 billion in steel and aluminum imports as well as $250 billion in imports from China has doubled the share of federal tax revenue that derives from tariffs — from 1 percent to 2 percent.

Two factors have contributed to the doubling of tariff revenue as a share of overall federal revenue in 2019. Besides the higher tariffs, corporate income tax collections fell by a third starting in 2018, after the implementation of the Tax Cuts and Jobs Act of 2017. 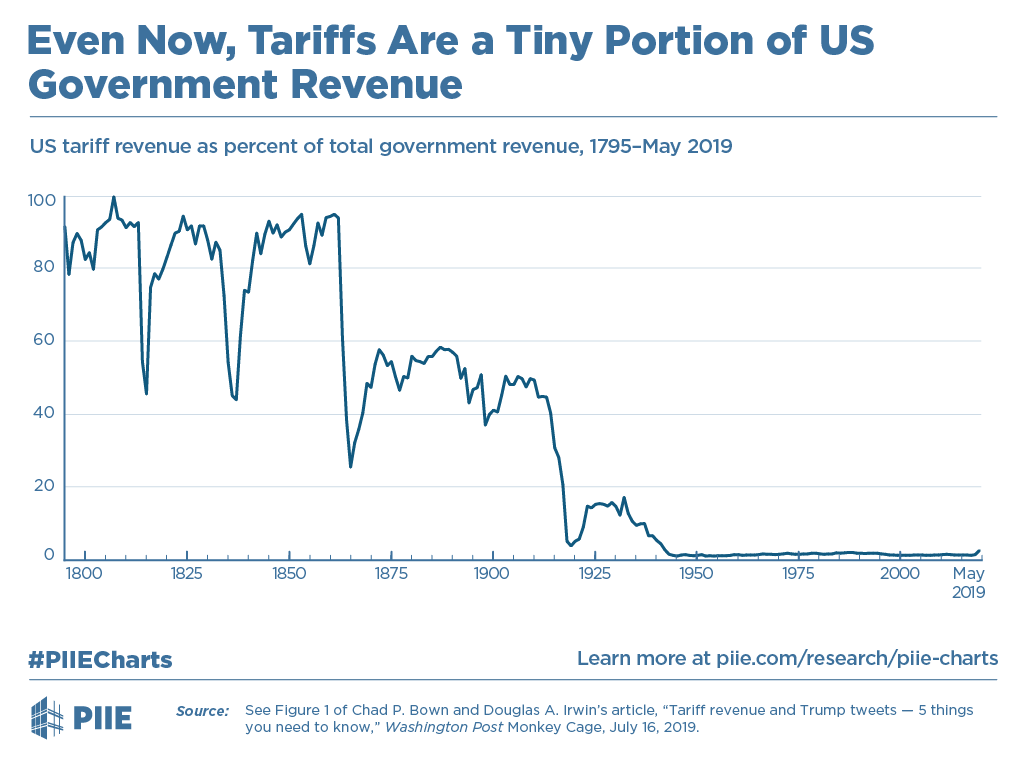 2. Tariff revenue hasn’t been a major source of fiscal revenue since 1914.

The U.S. government hasn’t relied on tariffs for a significant amount of its tax revenue in more than 100 years — see Figure 1.

The last time the share of tariff revenue in total tax revenue collections was more than 40 percent, and thus a significant source of total federal revenue, was 1914. The major shift was because of the 16th Amendment, ratified in 1913, which gave the federal government the constitutional power to collect income taxes.

There is no way the U.S. government could rely on import tariffs to fund expenditures on things such as national defense, Medicare and Social Security. In 2018, government spending on these and other programs was 20.8 percent of national income. Imports were only 12.5 percent of gross domestic product. Raising tariffs would deter imports, so they would fall as a share of GDP. Slashing imports may be one of Trump’s goals, but doing so undermines the ability to tax those imports to raise significantly more revenue.

3. Raising revenue through tariffs is more costly than other forms of taxation.

Governments require revenue to pay for roads and bridges, emergency responders, national defense, teachers and schools, and many other things. Policymakers face the question of how to raise tax revenue both efficiently and equitably.

Economists often think about minimizing the bad, unintended side effects of taxing any particular activity. On that score, sales taxes or income taxes are much better at raising revenue than trade taxes.

Here’s another big problem: Much of international trade today consists of parts and components. Tariffs thus harm the competitive position of U.S. companies that provide employment in the United States and rely on those inputs to make other things.

And then there’s the inevitable retaliation. China, the European Union, India and other places have imposed counter-tariffs on tens of billions of dollars in U.S. agriculture and manufacturing exports.

Simply put, there are some bad side effects of tariffs that don’t arise with other domestic taxes.

How do we tell whether tariffs are fair?

The first way to assess this is to determine who bears the burden of tariffs. Based on his tweets, Trump thinks foreigners are paying for his tariffs by reducing their prices to stay in the U.S. market.

Yet, the evidence suggests the opposite. Thus far, American companies and consumers are suffering the costs of Trump’s tariffs, in the form of higher prices and reduced purchases.

So who within the United States is taking it on the chin, exactly? Trump’s tariffs have hurt mainly the firms, farms and fisheries that now must pay more for inputs.

And who stands to gain? The beneficiaries are a handful of steel, aluminum or other input-making companies that face less competition and can raise their prices — ultimately at the expense of American consumers.

Missing from Trump’s many tweets on trade is a discussion of how other major U.S. trading partners rely on tariffs as a main source of their government revenue. That’s because they don’t. Today, it is primarily poor countries that are forced to rely on trade taxes — see Figure 2. 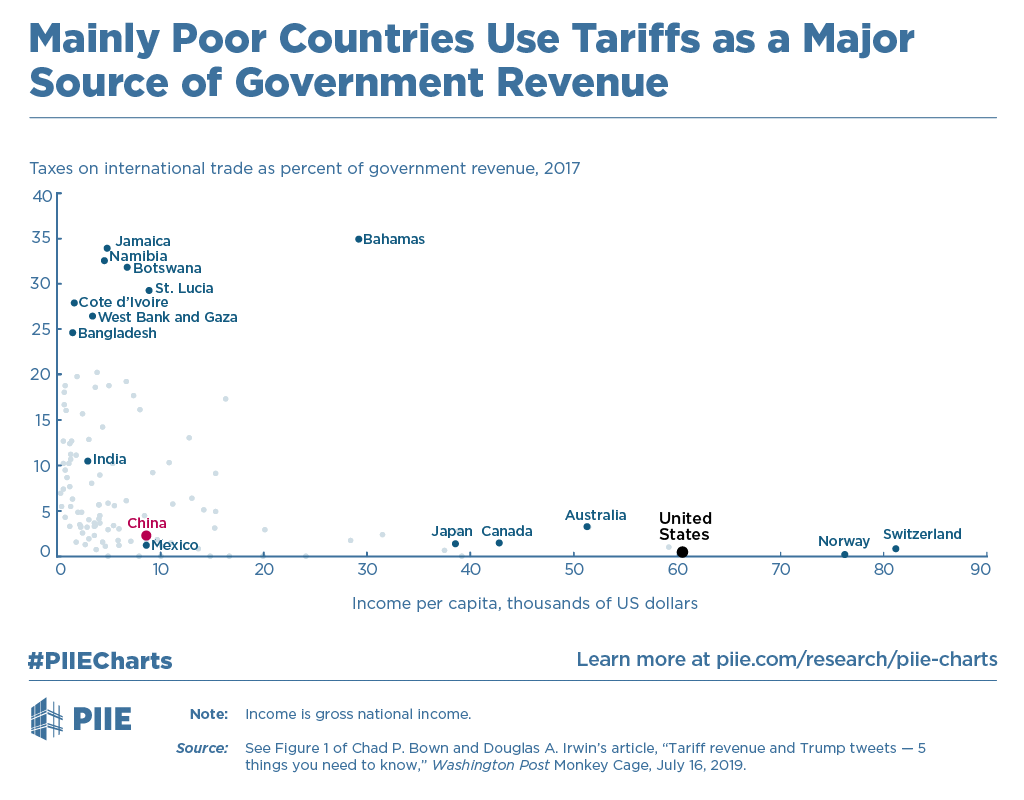 Even China — a country with much lower income per person, and one that Trump lambastes for its high tariffs — raises only 2.3 percent of its revenue from tariffs.

What’s the bottom line? Tariffs on imports are inefficient and inequitable compared with other taxes. They also cannot raise enough money for the federal government, and it’s U.S. companies and consumers who ultimately pay for higher tariffs. The idea of tariffs may sound good in a tweet, but such claims do not hold up in economic terms.