Zombies are a symptom of economic weakness, not a cause

The COVID-19 pandemic has revived attention on zombie firms, not only in Japan but around the world. Abundant credit, often from government programs, has enabled loss-making firms to survive. However, worries that zombie firms will drain resources from healthy firms and slow the coming recovery are misplaced. Zombies are a consequence of a weak economy and will either recover or die as the economy strengthens. Most advanced economies, including Japan, have been operating below potential for the past 30 years, creating an environment that allows zombie firms to stagger on. Aggressive monetary and fiscal policies to restore full employment coupled with sound bank supervision will end the problem of zombie firms.

What are zombie firms?

Zombie firms are commonly defined as those whose earnings are not sufficient to pay a market interest rate on their debt. This definition overstates zombies because, in any given year, some firms may face reduced profits for reasons that are not likely to persist. These temporary zombies are especially common during recessions.

True zombie firms are made possible by unsafe lending practices at banks that may themselves be zombies. These banks extend ever more credit to firms with no reasonable prospect of returning to profitability so that they can service their debts, a practice known as “evergreening.” The banks want to delay the inevitable losses from a failing zombie that would shrink their capital buffers and attract supervisory scrutiny.

The COVID-19 pandemic has created a large number of temporary zombies, but most of these firms are likely to return to profitability after the pandemic ends. Dealing with any true zombie firms should wait until after the economy has returned to its full potential.

Why worry about zombies?

Research by Ricardo Caballero of MIT, Takeo Hoshi of the University of Tokyo, and Anil Kashyap of the University of Chicago shows that zombie firms have lower productivity than other firms. By taking sales from healthier firms, zombies arguably reduce economic growth and retard the normal competitive forces that allocate labor and capital to their most productive uses. Given the increase in zombie firms as Japan’s economy slowed in the late 1990s, it is natural to suppose that zombies contributed to Japan’s lost decades. But this gets the direction of causation backwards.

Declines in economic activity and inflation make it harder for firms to pay back their investors, turning many into zombies. Banks, fearing a wave of defaults, begin to evergreen their loans out of a desperate gamble to stay alive until growth or inflation resume. The problem in Japan is that inflation never resumed and the economy never returned to its full potential.

Changes in the age structure, gender, and education level of the workforce have important impacts on the unemployment rate that are independent of the state of the economy, making it an imperfect guide to economic strength. One common way to remove these effects is to focus on prime-age male employment because prime-age males are the most strongly attached workers. The figure shows that prime-age male employment as a share of the prime-age male population has never returned to the high levels of the 1970s and 1980s. This is especially surprising because education levels have risen and education is associated with a higher probability of being employed.

The prime-age male employment rate peaked in 2018–19 at a level far below its earlier peaks, suggesting that the Japanese economy may not have been as close to full employment then as indicated by the overall unemployment rate. The inability of the Bank of Japan to achieve its target inflation rate of 2 percent, even in 2018–19, also supports the conclusion that the Japanese economy has been operating below potential for decades.

How to kill (or revive) zombies

The first step is to use all available macroeconomic tools to push economic activity above potential and keep it there for at least a few years. The best way to do that is to implement 4 percent salary increases in government and grant tax relief to businesses that also raise their worker’s wages by 4 percent per year. My PIIE colleagues Olivier Blanchard and Adam S. Posen recommended a coordinated wage increase in Japan back in 2015. More recently, Blanchard and Takeshi Tashiro argued in this newspaper (October 7, 2019) that more fiscal spending on education, worker training, and climate-related infrastructure will most likely pay for itself in stronger economic growth and higher tax revenues for years to come. The Bank of Japan should retain its yield curve control with 10-year JGB [Japanese government bonds] yields near zero. As inflation rises, a constant nominal bond yield would imply a dramatically lower real cost of capital, boosting investment in businesses and housing that would hire lots more workers.

Japan has built up a high government debt relative to GDP by allowing inflation to persist near zero and repeatedly adopting fiscal spending packages that avert disaster but are never large enough to achieve a truly strong economy. After the pandemic is over, the goal should be an unemployment rate well below 2 percent and a temporary but substantial overshooting of inflation above 2 percent. The paradox of a low interest rate world is that more borrowing can lead to less debt relative to GDP when the economy is weak and inflation is too low.

This is essentially the policy being pursued by President Joseph R. Biden Jr. and Fed Chair Jerome Powell in the United States: a massive fiscal expansion coupled with monetary policy aimed at temporarily overshooting its inflation target. Chair Powell has spent the past two years praising the benefits of a high-pressure economy that raises employment as far as possible. No major advanced economy has experienced a high-pressure economy since German reunification in 1991.

In a high-pressure economy, zombie firms would either revive or die, depending on whether they could take advantage of the stronger sales environment to service their debts without evergreening and raise their wages to retain their workers. Dying zombies would release their workers into a strong labor market with lots of opportunities. Productivity growth would soar as firms sought to economize on more expensive labor.

The second step is for bank supervisors to make sure that banks stop evergreening zombie loans. But taking this step before the economy revives would be a mistake. Killing a zombie firm in a weak economy only compounds the weakness, as newly unemployed workers reduce their spending and the effects reverberate, taking down other firms in turn. When the economy is weak, zombies perform a valuable service of maintaining employment and spending. It is better to have workers in underperforming zombie firms than to have them unemployed. 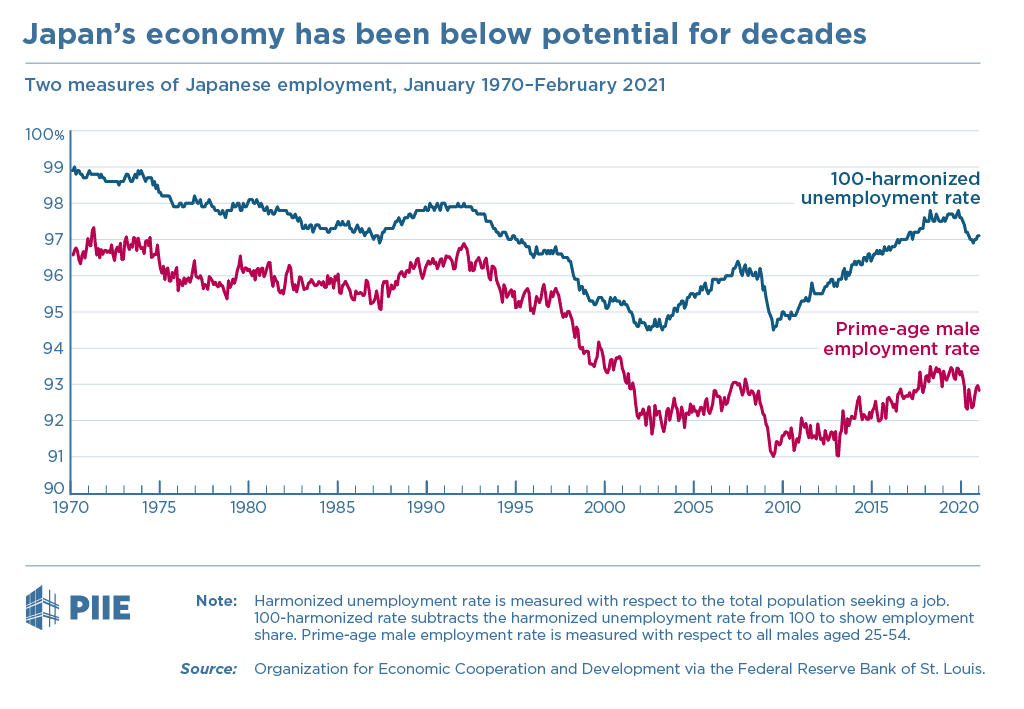 Turning Back the Clock: Japan's Misguided Postal Law is Back on the Table