Indian manufacturing and services exports have grown slowly since 2012. This export stagnation problem is compounded by India’s absence from the megaregional trade agreements being negotiated among its major trading partners. The Trans-Pacific Partnership (TPP) will include the United States, Japan, and several ASEAN countries; while Korea, other members of APEC, and possibly China may join TPP in a second stage of negotiations or work out a separate Free Trade Area of the Asia-Pacific (FTAAP).

The trade pacts currently being developed will generate trade diversion from India worth billions of dollars and set new standards that will further jeopardize its competitiveness. The big hit, however, would occur if the TPP were expanded to the rest of APEC, including China, or if a new FTAAP with that same membership were to emerge. Such a grouping that excluded India would cost it $45 billion in annual exports and $30 billion of annual income. By contrast, the chart shows that by joining an expanded TPP or FTAAP, India could experience significant export expansion of more than $500 billion per year, a 60 percent increase. Such gains would phase in over a transition period of about 10 years. For more analysis on a strategy for India’s trade-led growth, see C. Fred Bergsten (2015). 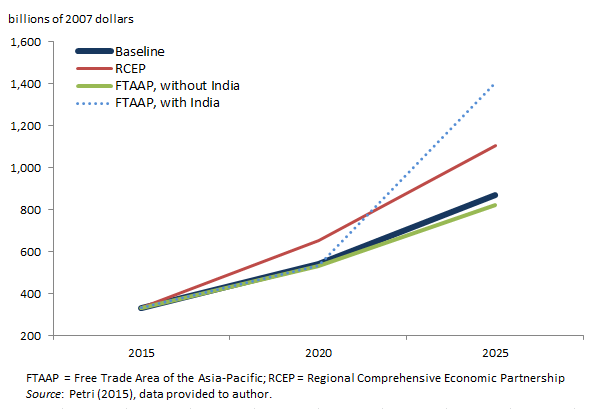 Free Trade in the Pacific: Wooing Back the United States