While enforceable currency provisions will not be central to the Trans-Pacific Partnership (TPP), exchange rate policies will be closely followed both in the forthcoming congressional ratification of TPP implementing legislation and in the decision whether to approve participation of new countries in the TPP. Korean officials should take heed. The most recent US Treasury Report on exchange rate policies noted “Korean authorities have intervened to resist won appreciation in the context of a large and growing current account surplus.” The chart shows that in 2013 and 2014, Korea’s current account surplus exceeded 6 percent of GDP; in the first half of 2015, the surplus soared above 8 percent—though this was in part due to the falling cost of oil imports. The Treasury did not conclude that Korea was “preventing effective balance of payments adjustments or gaining unfair competitive advantage in international trade”—its criteria for judging currency manipulation—but it did recommend Korea refrain from currency intervention and “allow the won to appreciate further.” For more analysis see Schott (2015). 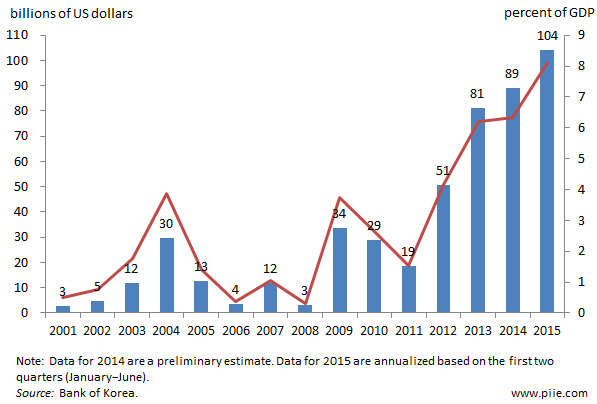 RCEP is not enough: South Korea also needs to join the CPTPP

More on TPP and Exchange Rates