The United States has been disengaging from the global economy

The United States’ openness to the global economy can be measured by the cross-border flows of goods and services (trade); of capital (foreign direct investment and other types of financial assets); and of people (immigration).[1] By some of the most central measures, depicted in the figures below, US disengagement from globalization has been significant, particularly in comparison to the general trend in and behavior of other large high-income democracies. Former President Donald J. Trump may have pursued that decoupling with his policies discouraging offshoring of US manufacturing and imposing tariffs on imports. But the trend of US deglobalization began with US administrations well before Trump took office in 2017.

The figures also illustrate that these successive US governments’ efforts to protect selected domestic workers by insulating them from the global economy have already failed—the US workforce is no better off, and in many ways worse off, than other advanced democracies, which increased their openness to the global economy at the same time: Labor force participation in general and for women in particular is lower; manufacturing jobs have declined as a share of employment at the same rate; and labor earnings as a share of GDP have followed the same path.

In his newly published article “The Price of Nostalgia: America’s Self-Defeating Economic Retreat” in Foreign Affairs, the bimonthly journal published by the Council on Foreign Relations, Adam S. Posen argues that making life better for American lower-income workers depends on the United States reopening to global economic cooperation and integration. The figures below showing signs of the deteriorating US role in the world economy were adapted from research for that article.

US trade openness has not kept up with the world 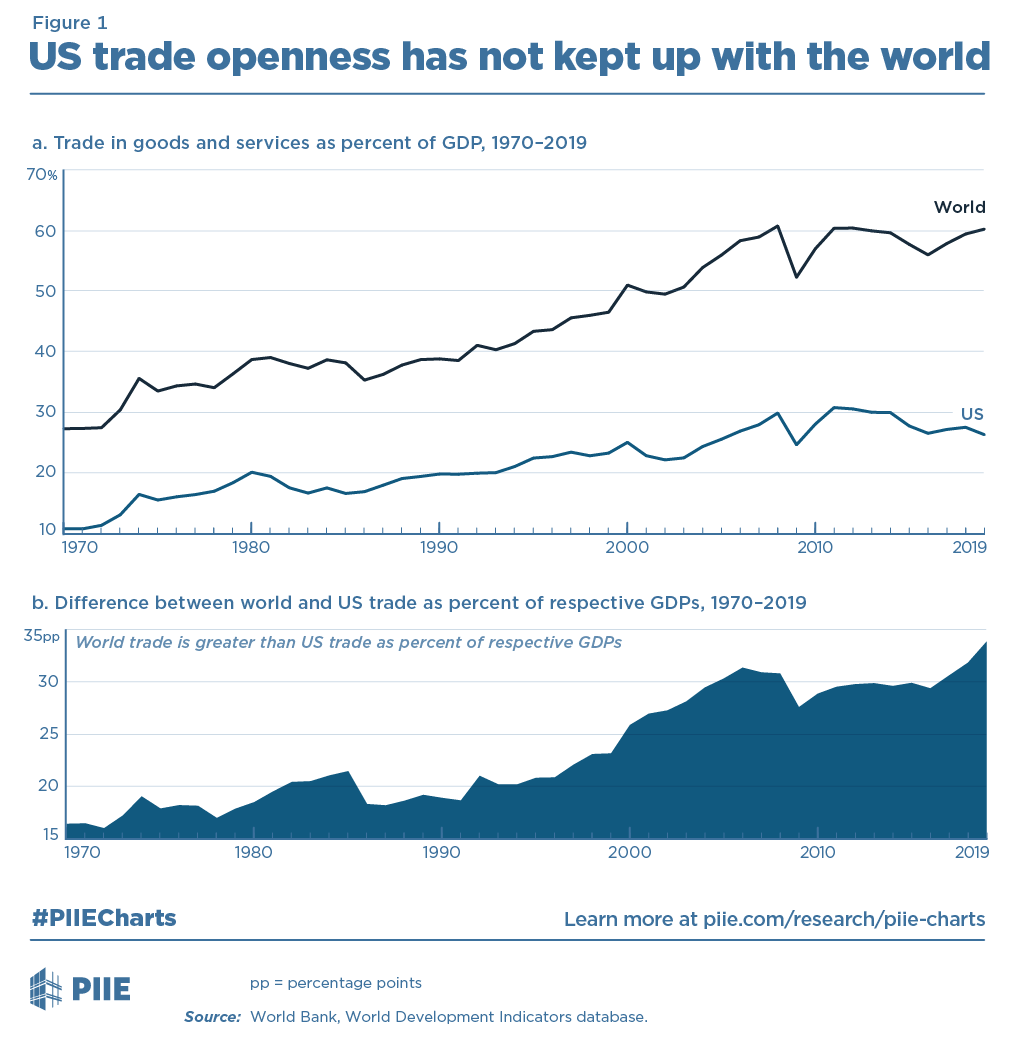 A common way to measure a country’s openness to trade is to add imports and exports in goods and services and divide the sum by its GDP. The larger the ratio, the more the country is integrated into international trade. Once seen as a force driving increased global trade openness, the United States is now lagging behind international trade expansion, more so since 2000. Global trade—i.e., total world exports plus imports of goods and services—increased from 38.8 percent of world GDP in 1990 to 60.8 percent in 2008. The United States has not kept up with this trend, however: US trade as a share of its GDP has risen more slowly than that of other countries, from 19.8 percent in 1990 to 29.9 percent in 2008 (panel a). The gap between global and US trade as a portion of the respective GDPs thus increased from 19.0 percentage points in 1990 to 30.9 percentage points in 2008 (panel b).

Global trade as a share of world GDP plunged during the global financial crisis but has recovered slowly since then. US trade as a share of its GDP also plunged but after a short rebound has continued to fall. This decline expanded the difference between global and US trade openness to 34 percentage points in 2019, the largest gap in half a century. 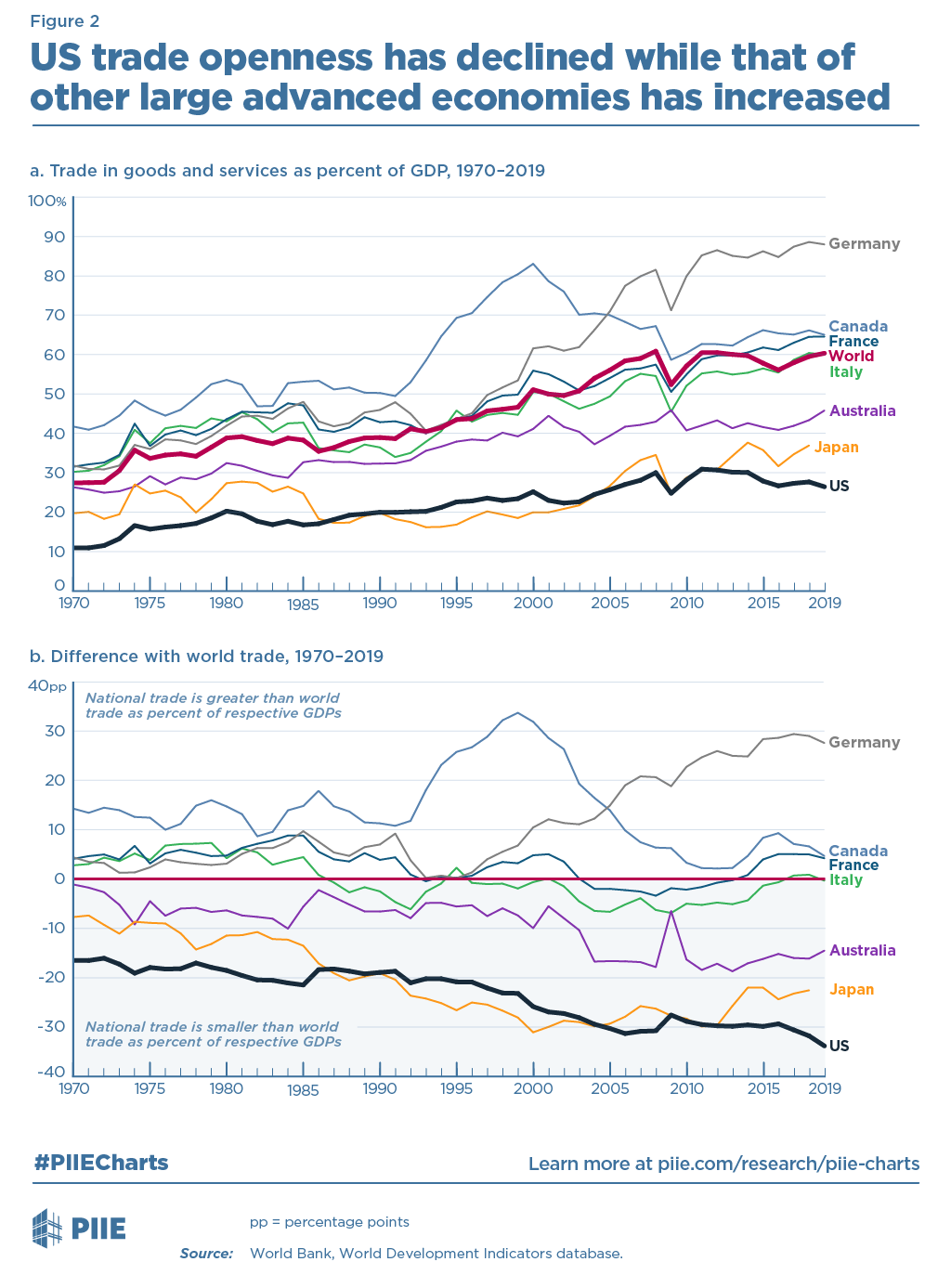 When measured by imports and exports as a share of its GDP, the United States has lagged behind not only the general trend of international trade expansion but also the upward trend in the other large advanced economies. This figure illustrates that the United States is also the only major advanced economy to have widened the gap with world trade in the last five years.[2]

In Germany, Canada, and lately France exports and imports as a share of their respective GDPs have been close to or have exceeded world trade as a share of global GDP. Italy’s trade share of GDP surpassed that of the world in 2017-18 but dipped slightly below it in 2019.

Foreign direct investment into the United States has stagnated since 2000 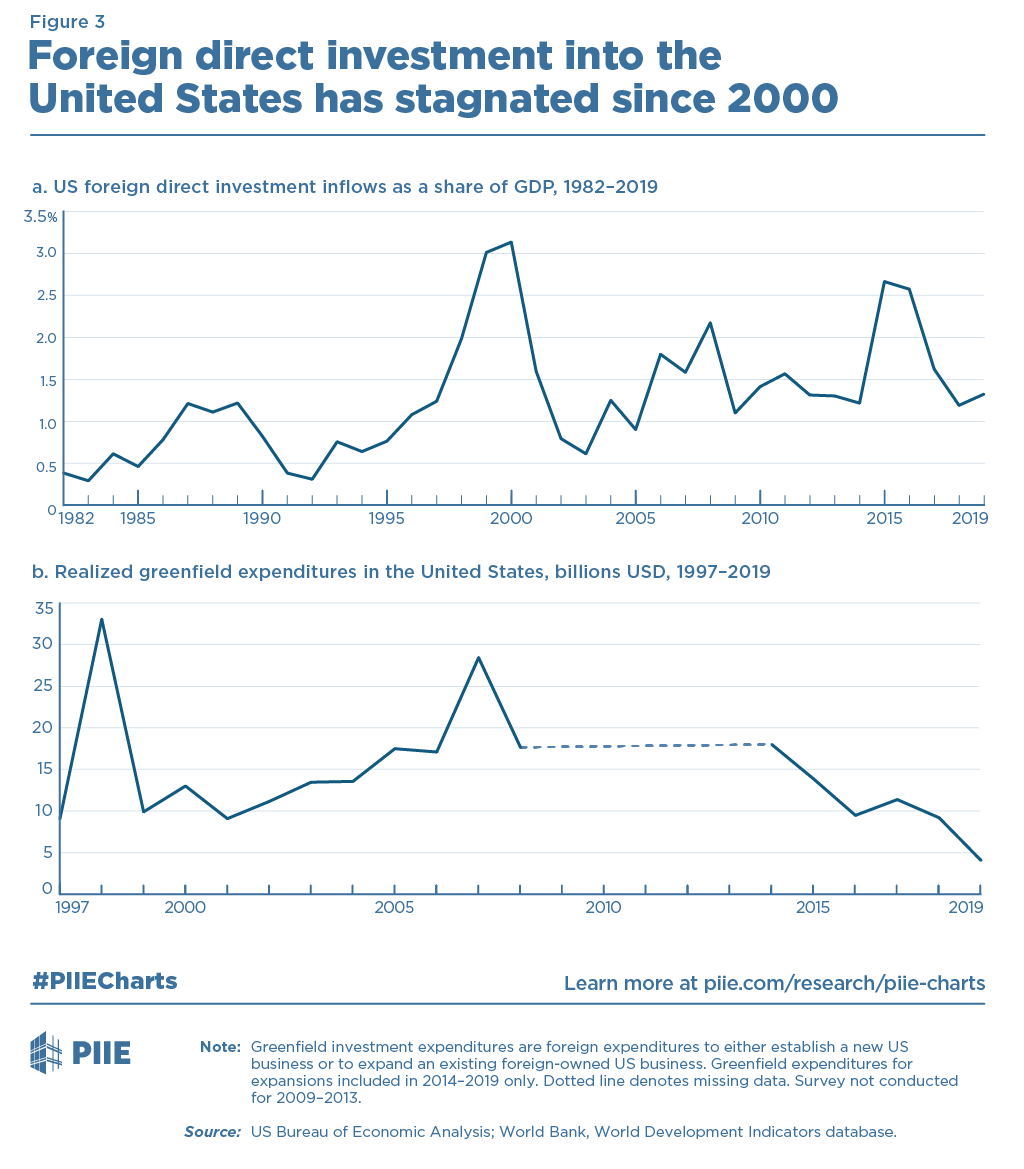 US immigrant population growth has been slowing for decades 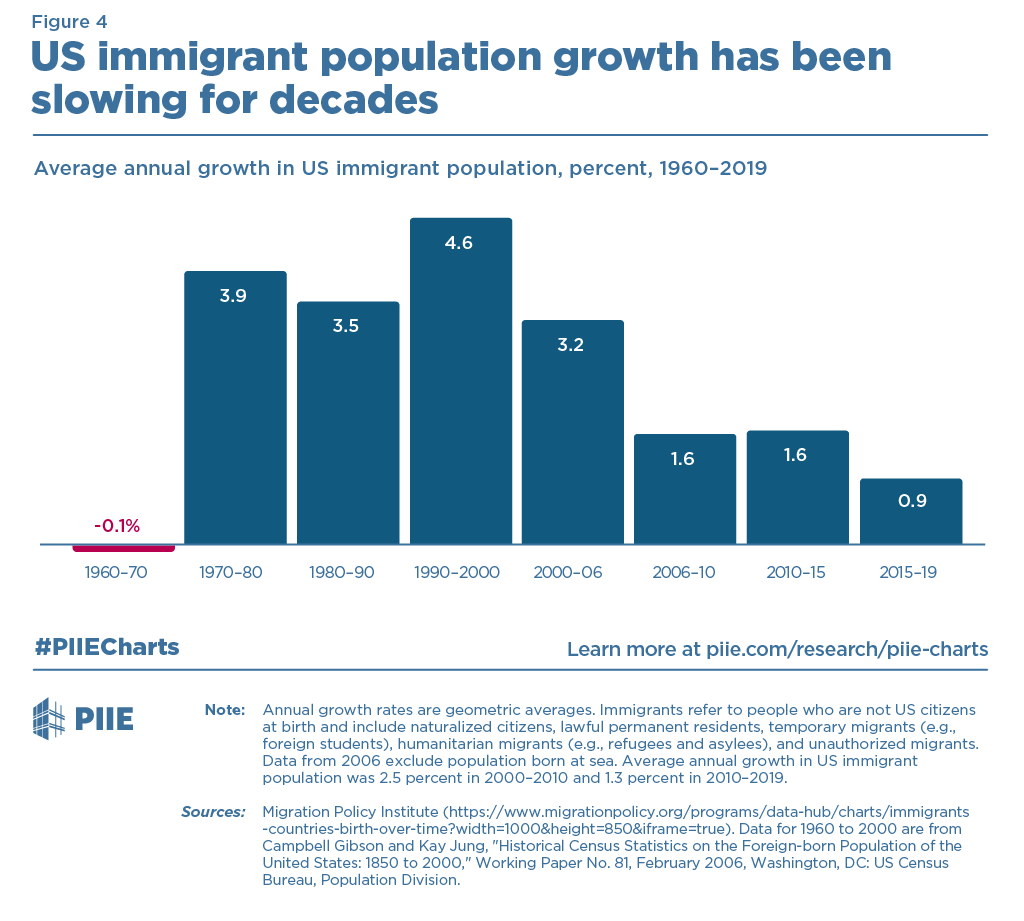 After surging in the late 19th and early 20th centuries, immigration to the United States began to decline largely as a result of restrictive immigration laws enacted in the 1920s. The Great Depression and World War II kept immigration levels down, with the immigrant share of the US population hitting a record low in 1970. But average annual growth of the US immigrant population sharply rebounded in the 1970s, reaching a peak of 4.6 percent in the 1990s, primarily because of important shifts in US immigration laws and increased immigration mainly from Asia and Latin America.

US foreign-born population growth, however, began to slow in the 2000s. Average annual growth declined to 3.2 percent in 2000-06, fell further and stabilized at around 1.6 percent in 2006-15, before dropping further to 0.9 percent in 2015-19. The declining trend in immigration started well before President Donald J. Trump took office in 2017, but his policies and statements contributed to the further recent immigration declines. Factors other than US immigration curbs, such as declining interest from potential immigrants due to rising economic opportunities and aging populations at home, may also have contributed to the downward trend. 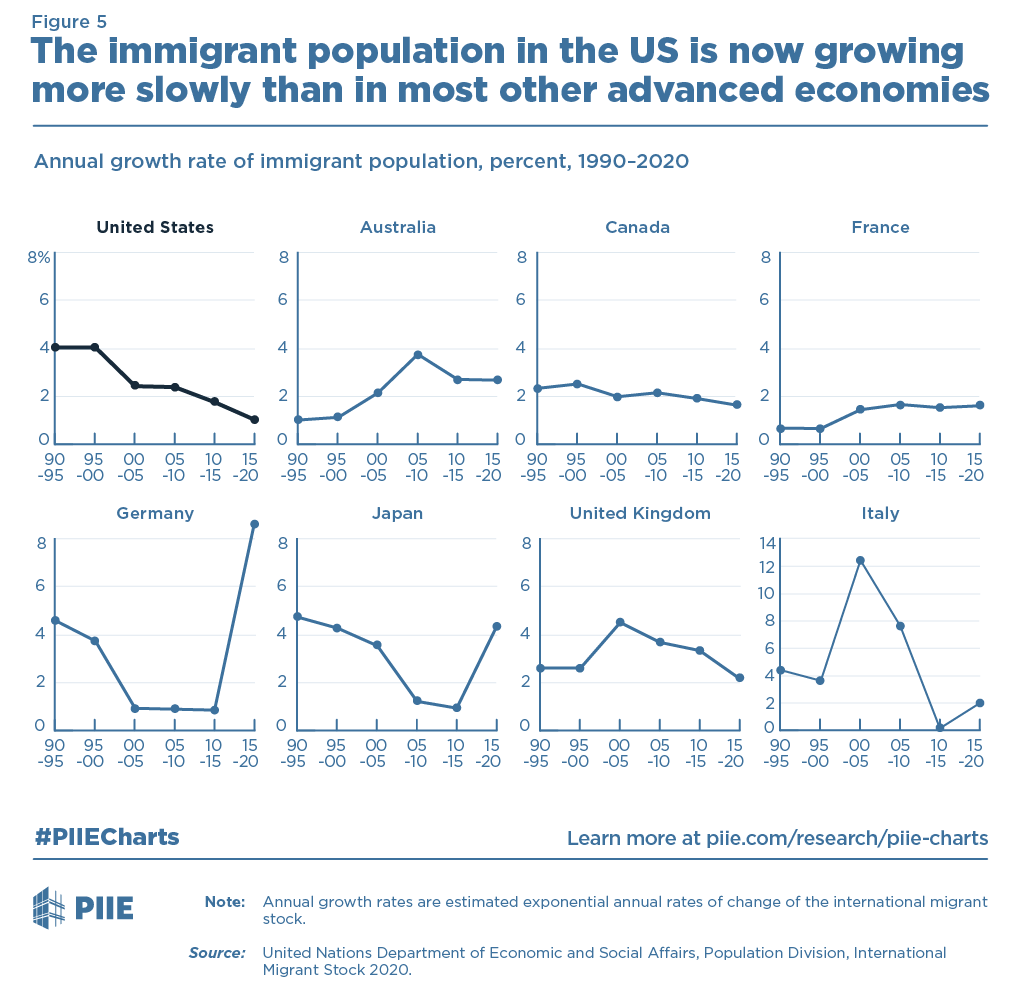 In most advanced economies, annual immigrant population growth rates have been largely stable over the last three decades, with some occasional spikes as in the case of Germany in 2015-20 as a result of its decision to welcome migrants from North Africa and the Middle East. Growth rates in Italy’s foreign-born population bottomed out in 2010-15, following a surge in the 2000s, and rebounded in 2015-20. Compared with immediately preceding years, the immigrant population in Japan also grew at a faster rate in 2015-20. 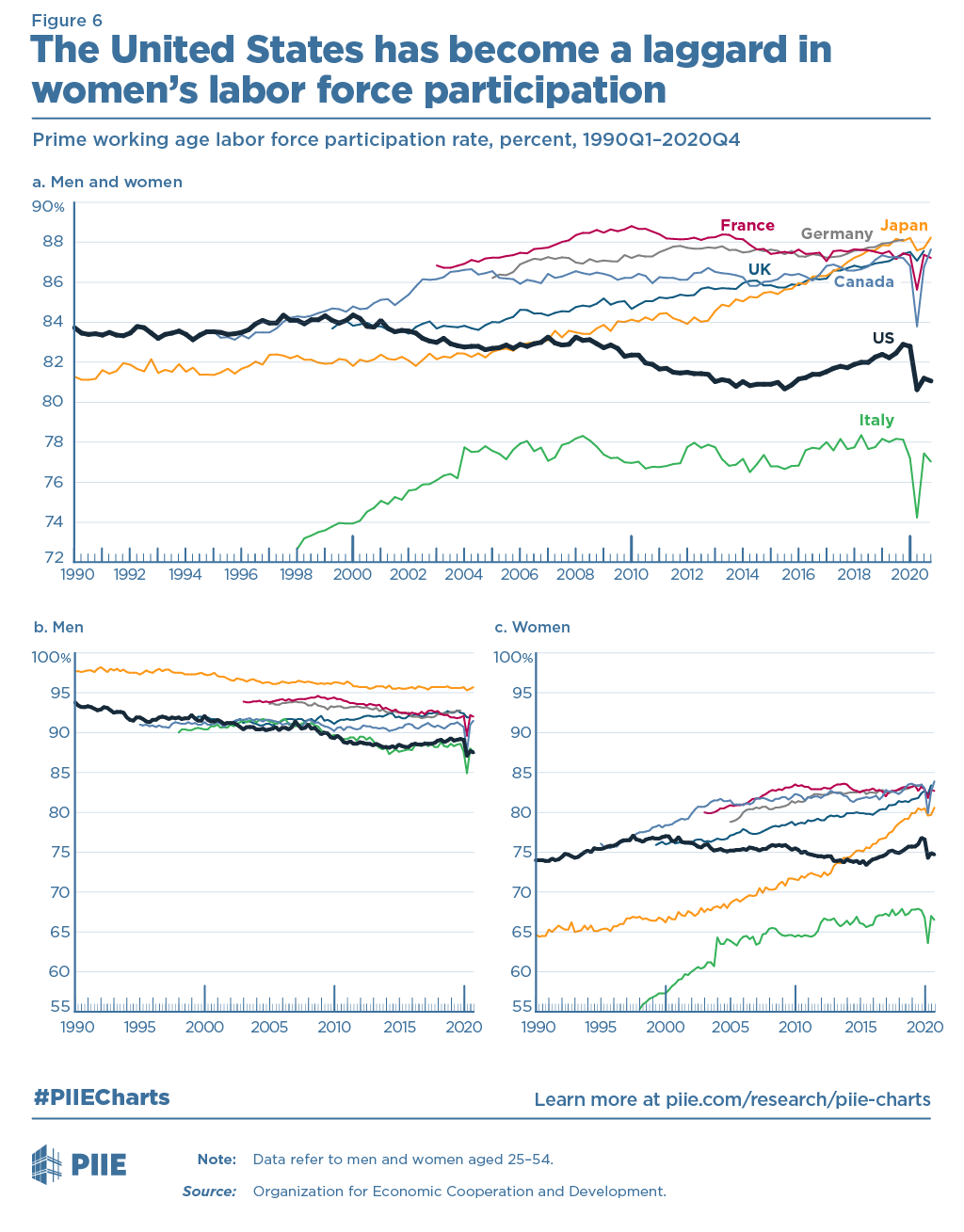 Women’s labor force participation rate (LFPR) in the United States—the percentage of prime working age women (25-54) who are employed or actively looking for work—rose steadily in the second half of the 20th century, especially in the 1960s through the 1980s. The increase slowed in the early 1990s, followed by a decline till 2015, when the rate picked up again. In other Group of Seven (G7) industrial democracies, women’s LFPR rose steadily between 2000 and 2015. In particular, the United Kingdom surpassed the United States in the early 2000s and Japan did so in the early 2010s (see panel c).

Even after prime-age women’s LFPR rose starting in 2015 to 77 percent in the US by the end of 2019, it was still substantially lower than in every G7 economy except Italy. Moreover, the COVID-19 pandemic has recently reversed these gains, making a more persistent and larger dent in US female LFPR than in other advanced economies. The gap between labor force participation of women and men has widened during the pandemic, as female LFPR was hit harder (panel c) and has recovered more slowly than male LFPR (panel b). The pattern was different in some other G7 countries. LFPRs for women rebounded and exceeded their pre-pandemic levels in the United Kingdom and Canada in the latter half of 2020.

Manufacturing employment has been declining in all advanced economies for decades 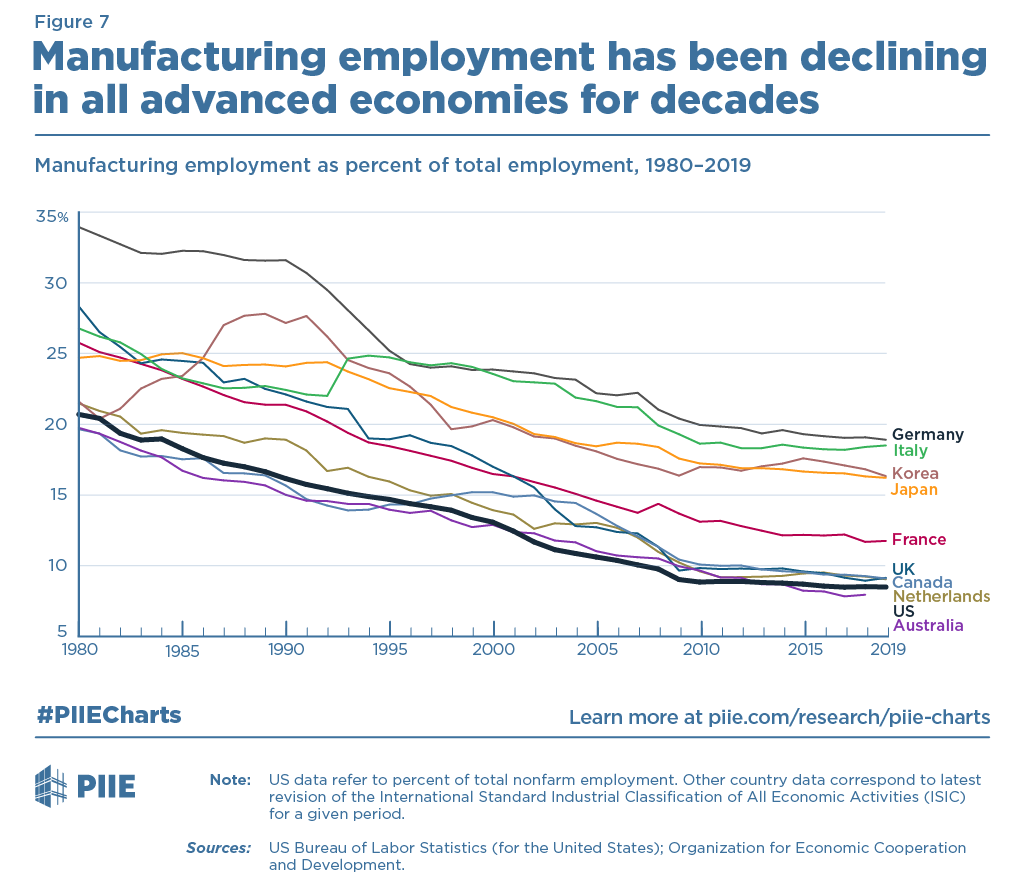 Critics attribute the decline in US manufacturing jobs to globalization, citing increased imports of manufactured goods and rising competition over the last 50 years, first from Japan and Germany, then from South Korea and Mexico, and now from China. Offshoring of manufacturing plants and jobs to low-wage locations abroad is also blamed. Other factors, however, may be more influential, including increased use of labor-saving technologies and improvements in productivity, which have reduced the need for more manufacturing workers. Productivity-enhancing technologies have made it easier to produce more goods with fewer workers. Changes in consumer demand, with rich-country consumers now spending more of their incomes on services rather than on manufactured goods, have also affected manufacturing employment. See more at PIIE’s microsite on globalization.

Labor’s share of national income fell, then stabilized at lower levels, in most advanced economies 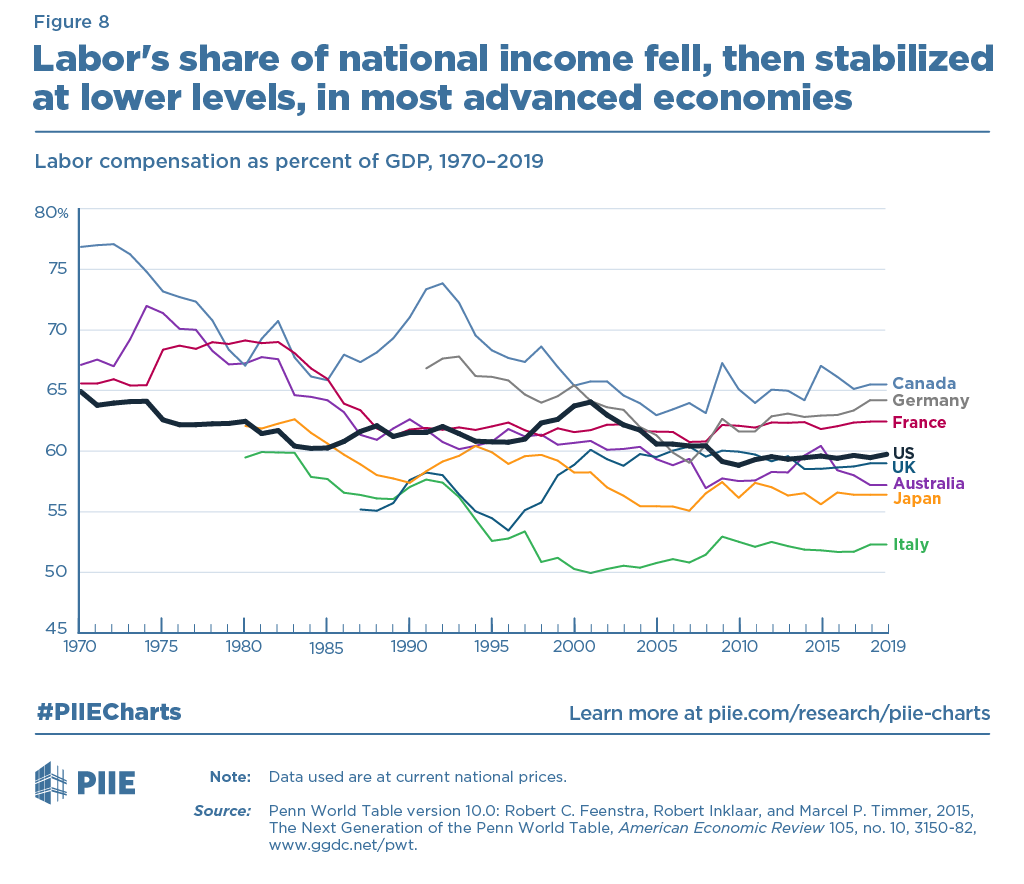 This overall downward trend can be attributed to many factors, including technological improvements and automation, effects of international trade and offshoring, faster depreciation of fixed capital and a shift to intangible capital, and boom-bust cycles. There is accumulating evidence that the combination of weakening workers’ bargaining power, and the rise of superstar firms and increased market concentration have played an especially large role. One recent study shows that large or superstar firms that pay a larger share of revenue to capital owners and distribute as profits, but a smaller share to their workers, are dominating markets and accounting for a bigger piece of all economic activity, while smaller firms that spend more on workers and less on capital are losing market share. A declining share of labor and a parallel rising share of capital in GDP is often associated with increased economic inequality: In the United States, as argued by Jason Furman and Peter Orszag, increased concentration and reduced dynamism in the economy have contributed to rising inequality and wage stagnation. The increasing closedness of the United States has not prevented, and arguably has contributed to, this concentration, with insulation of dominant US superstar companies failing to benefit lower-income workers.

1. Starting now, the Peterson Institute for International Economics (PIIE) will continue to track the deglobalization of the US economy, updating the data and comparisons regularly at www.piie.com. Other relevant measures of US withdrawal, to be covered in future, are adherence to international laws and standards, which can be tracked by the conduct of American business and government, participation in international organizations, and openness to ideas and norms from abroad (including the domestic acceptance or resistance to foreign cultures, brands, and innovations).

2. The United Kingdom is omitted from this figure due to the one-time shock of Brexit rendering recent data incomparable.

Memo to the Biden administration on how to reinvigorate US alliances