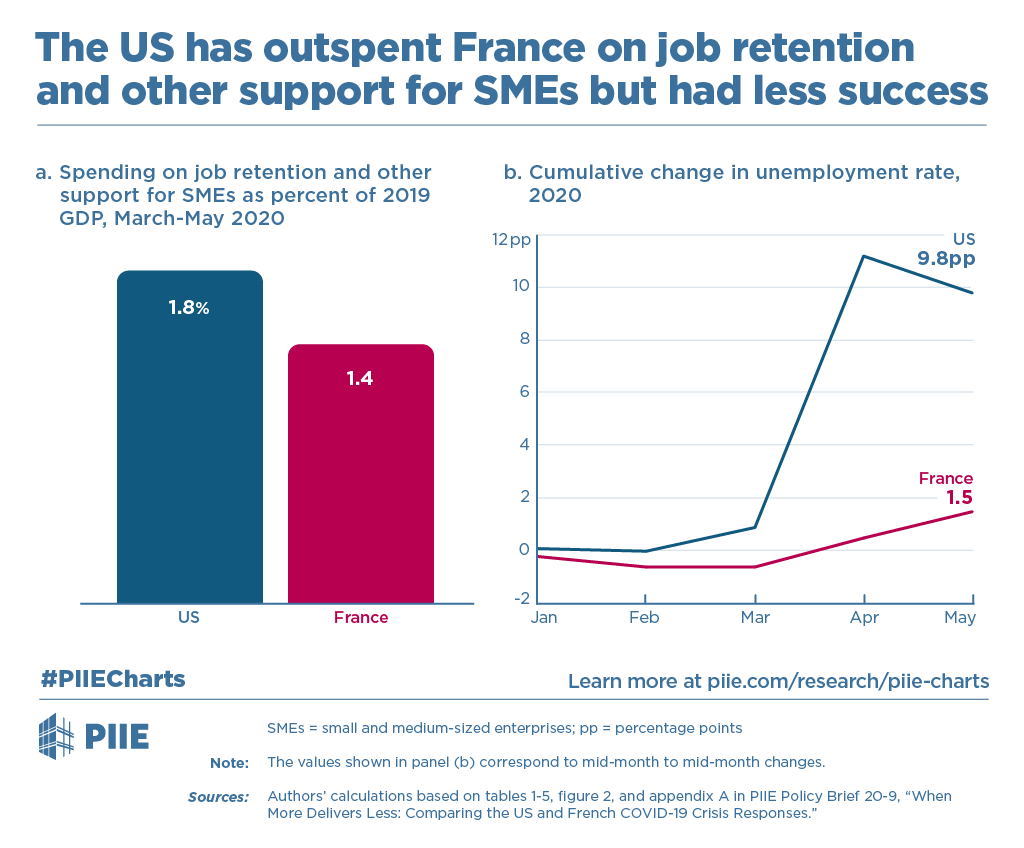 Job retention schemes and other support for small and medium-sized enterprises (SMEs) that governments in the United States and Europe introduced in response to the COVID-19 pandemic have had mixed success. The US program has been more expensive but less effective than the French approach at curbing unemployment. From March to May 2020, the United States spent 1.8 percent of its 2019 GDP on job retention schemes, most notably on the Paycheck Protection Program (PPP), while France’s chômage partiel (partial unemployment) scheme and fonds de solidarité (solidarity funds) for SMEs cost a combined 1.4 percent of its 2019 GDP.

Several features of the US PPP prevented funding from getting to where it was most needed. By allowing firms to spend up to 33 cents on nonpayroll expenses for every $1 spent on payroll, and still forgiving the entire PPP loan if employment is maintained, the scheme does not just (indirectly) pay wages to workers but also provides a large subsidy for nonpayroll expenses, making it attractive even to firms that are not likely to lay off workers. Unlike job retention schemes in other countries, funding for PPP is not open-ended but capped, which incentivized firms to rush to access relief for fear of being left out. In addition, the size exemption allowed large hotel and restaurant chains to claim a significant portion of PPP funding. Altogether, evidence suggests that more robust firms with stronger infrastructures and privileged bank relations crowded out fragile firms most in need.

This PIIE Chart was adapted from Jérémie Cohen-Setton and Jean Pisani-Ferry’s Policy Brief,  “When More Delivers Less: Comparing the US and French COVID-19 Crisis Responses.”

When more delivers less: Comparing the US and French COVID-19 crisis responses